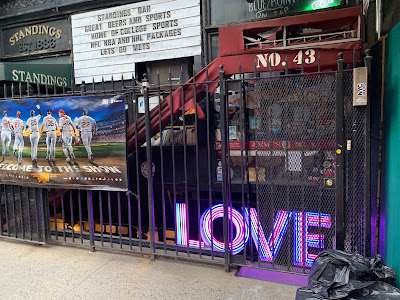 EVG reader Chris Rowland spotted this illuminated LOVE neon sign outside the former Jimmy's No. 43 space the other day.

So we asked proprietor Jimmy Carbone what this was about.

As we previously reported, Carbone is collaborating with Graham Winton of Paloma Rocket for a new venture in the basement space here between Second Avenue and Cooper Square. The plans for Paloma Rocket-Carbone Pizza were put on hold during Carbone's health scare.

In an email this week, Carbone said that the two are still awaiting on the final approval from the State Liquor Authority.

As for the sign, he said "in these troubling times all you need is ❤️ LOVE." He explained that Winton bought a vintage sign collection, many of which will hang in the new space. 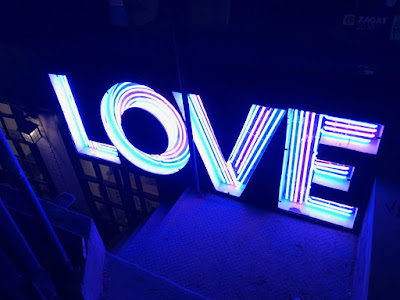 There isn't a firm opening date yet, but they are in the sign-decorating stage!

Previously on EV Grieve:
Jimmy Carbone on the long recovery ahead: 'Starting each day is a challenge'

Jimmy Carbone and Paloma Rocket collaborating on new venture for the Jimmy's No. 43 space
Posted by Grieve at 4:10 AM