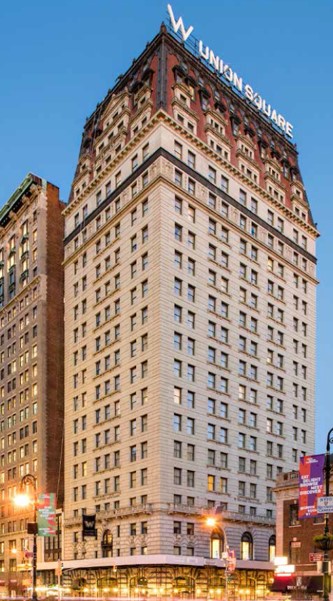 Of possible local interest from the EVG inbox yesterday — Marriott International announced that it has purchased the 270-room W New York Union Square on Park Avenue South and 17th Street.

To the news release!

The company paid $206 million for W New York Union Square, with plans for a significant renovation. Marriott International will transform the existing hotel into a cutting-edge W Hotels showcase, advancing the company’s strategy to redefine and reinvigorate the brand in North America.

[T]he 20-story hotel features historic Beaux Arts architecture, panoramic views of Union Square’s namesake pedestrian plaza and lively park, and a “W Union Square” rooftop sign that stands out on the Downtown skyline. The property first opened its doors in 1911 as the headquarters of the Guardian Life Insurance Company of America, and in 2000 opened as W New York – Union Square.

The renovation seeks to unlock the property’s untapped potential with plans for a signature, socially-charged spa and an expanded restaurant on one of New York City’s most bustling street corners.

No word on what a "socially-charged spa" is at the moment.

The Marriott recently opened an outpost of its Moxy brand over on 11th Street between Third Avenue and Fourth Avenue.
Posted by Grieve at 4:00 AM

“socially-charged spa” ... I thought those were closed by the city in the late 80’s 🧐

1st change, add a bar/club on every floor, rooftop amusement park and shrink rooms to half size, woo!

Bring back the Germania Life Insurance Company, the original occupants of the building!

"cutting edge" = lots of booze, and a room so small you have to go outside to change your mind. Who imagined it would be Mormon-owned Marriott that would ruin our area by catering to so many boozers?

Ugh!!! Hard to be sentimental about any W but somehow this ended up the place where I would go to get drunk with friends after they lost their jobs, and it was excellent for that.

I thought the W was already a Marriott property through their purchase of Starwood a few years back? Or did they only lease the physical building?