Here then, the Lower East Side Quality of Life Improvement Plan 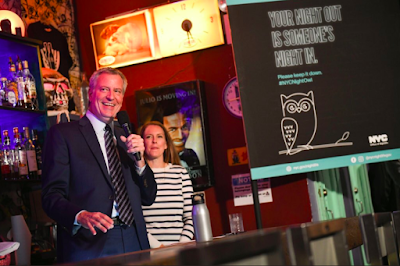 [The Mayor at Max Fish via @NYCMayorsOffice]

The city yesterday unveiled a new etiquette campaign aimed to douse the flames of the hellish nightlife inferno that engulfs the Lower East Side on weekends.

Here's the release on the pilot program via the city:

The Lower East Side Quality of Life Improvement Plan is a multiagency plan to improve quality of life for New Yorkers living in one of the city’s densest nightlife districts. The plan is focused on 6 blocks of Orchard and Ludlow Streets between Houston and Delancey on the Lower East Side.

Improvements will reduce traffic and pedestrian congestion on the street and make garbage sweeping routes more effective. Nightlife patrons will also see a new etiquette campaign encouraging them to be more respectful aware of their surroundings.

Residents and businesses often complain of late-night horn honking and loud voices as traffic stops due to double-parked cars dropping off and collecting passengers on narrow streets.

The plan addresses residents' and businesses’ concerns and make their neighborhood more livable, and was designed with the support and input of the community and businesses and has the buy-in of residents, business owners, workers, and local officials.

The components of this plan include:

• DOT implementing “No Standing” rules overnight: from midnight to 6am on the west sides of Ludlow and Orchard streets, and 7 pm to 7 am on the east sides, seven days a week.
• Removing parked cars overnight eases congestion, honking and other noise.

• Street sweepers will now operate between 3 am and 6 am, to better capture all the litter dropped by late-night patrons of bars and restaurants.
• The old schedule from midnight to 3 am was less efficient, because many streets were swept before closing time, leaving hours for patrons to drop litter.

• TLC will increase enforcement patrols to clamp down on unlicensed for-hire vehicles double parking and making unauthorized pickups.
• A 10-person squad of TLC officers and supervisors will conduct random patrols between 11pm and 3am at least once every Friday and Saturday night.

• Office of Nightlife [Night Mayor!] and NYPD creating and distributing signs to bars and clubs with tips for theft prevention and other helpful tips.


Here are two of the "Night Owl" signs that will appear on LinkNYC kiosks ... 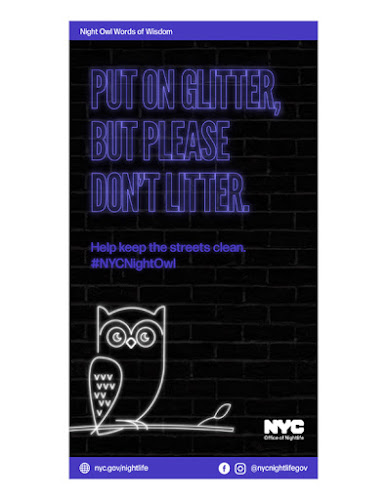 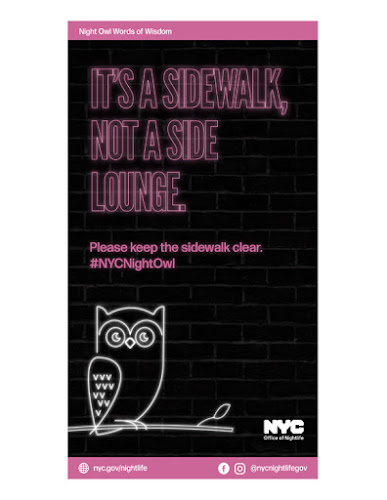 "The world loves New York nightlife, but we also have to take care of the New Yorkers who live where others play," Mayor de Blasio said in a statement. "We are creating cleaner, quieter streets to improve quality of life while ensuring bars, restaurants and clubs can thrive."

You can watch a recap of the press conference here...

The city that never sleeps has to look out for the New Yorkers who live where others play. Join me on the Lower East Side. https://t.co/UYvFf1vUak

Office is a waste of taxpayer money, & was created by lobbyist & propped up by bogus EIS report touting all the $ nightlife brings (after lumped in w/ MSG, getting icecream at 6pm w/ your kid, & Broadway). We have a homeless epidemic, not enough good schools, trains suck! Focus! https://t.co/8aORWPKeCy

For the last 40 years I've been inviting Mayors to have breakfast with me in the EV and walk from Second Avenue and 14th Street to Second Avenue and Houston. You know, not one of them was nice enough to RSVP either way? I wanted to show them the dirtiest Avenue in the city. What it looks like at 6AM is truly disgusting on some days.

Maybe they will bring those power washers north of Houston.

"one of the city’s densest nightlife districts" Who's policies and lack of enforcement of the 500 ft rule created this mess?

Asking intoxicated patron of the multitude of bars, restaurants and clubs in the LES to hush their voices is not going to work period. These people are here to prove the fallacy that this is the city that never sleeps, the last thing on their minds is that a family is sleeping just above them.

If the Mayor was serious about restoring some sanity in our neighborhoods he would limit the number of liquor licenses which operate here. Of course their is just too much money to be made from the sale of alcohol so all of this is just to give the appearance that he is doing something for the LES.

So there's more of my tax dollars going to waste. Here's my idea for a poster aimed at DeBlahblahblah - "I'd Feel Fine If You'd Just Resign" - but that's not gonna work any better than one rhyming "glitter" with "litter".

MOST. WORTHLESS. MAYOR. EVER!

great - the LES will push the problems to their neighbor the EV and chinatown.
these are city wide problems and cannot be solved neighborhood by neighborhood.
you can't have one law for 14th street and another for delancey.
the entire office of nightlife should be abandoned and not replaced.
the SLA should do their job. the police should enforce existing laws.
a few tickets to offenders would pay for the police overtime.
elected "officials" should do their job and stop making speeches.

I'm with Anonymous @ 7:56. How about 2nd Ave! Aside from being a filthy mess, the daily, and I mean 24/7, Honkathon that goes on is criminal. Hundreds of taxis, Ubers, Lyfts who all assume that leaning on their horns will make traffic magically disappear and they can deliver their usually one rider to the latest "trending" place while double parked. And let's not forget the delivery trucks who barrel down 2nd Ave at 2-4 a.m. with their "air horns" blasting all the way to Houston. Those horns should be banned within city limits. And the bros and hos who get louder as they get drunker. This new BS from deBlah is meaningless verbiage. It will fade from site in a month. If they were serious they would have cracked down a long time ago.

LOL, more space to party in the streets!

My bad - it's too early "it will fade from sight".

Weird that they took away parking on BOTH sides of the street. That's annoying for residents I bet.

De Blasio is beyond useless, and his 'nightlife mayor' is worse than a joke; she's an absolute waste of whatever taxpayer $$ she gets paid.

The whole effin' "nightlife" thing is a bad joke (except it's not funny). They're pretending that 10/10 drunk bozos will READ the signs, much less give a flying eff about anyone's 'quality of life'.

And yes, I agree, this just pushes the lousy drunken behavior to other places, like the East Village, where we ALREADY have enough crap to deal with.

Can impeach our Mayor?

Awesome.
Will push all this crap back up onto Ave. B.

Honking in NYC is already ilegal. Some enforcement of traffic laws—or better yet, banning cars in the area in question—would do more to improve the quality of life.

These steps seem reasonable too though

And lets not talk about Vision Zero on his watch.

I agree: He should be impeached.

Aggressively ticket honking- that would solve more than half the problem.

Should I laugh or cry? Have you ever tried to teach etiquette to a drunk fratboy?

MY version of "vision zero" would be ZERO drunks prowling the streets as they treat our neighborhood like a urinal + vomitorium.

We need help on upper Avenue A, too. It is a nightmare here on weekend nights. So much screaming, honking, puking.