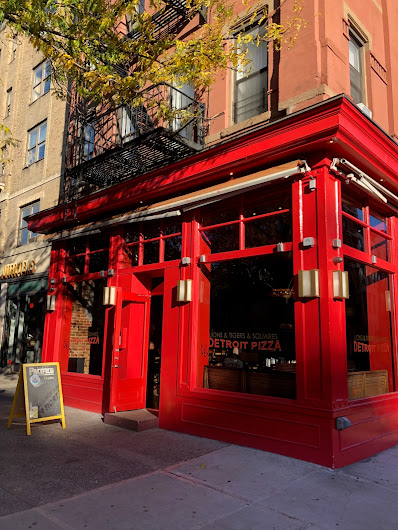 As we noted on Oct. 11, the outpost of Lions & Tigers & Squares is now open here on Second Avenue and 10th Street.

The pizzeria, via the owners of Artichoke, is an homage to all things Detroit with a menu showcasing four-slice Detroit-style square pies featuring pepperoni, baby meatball, black olive and their Mustard Pie with spicy brown mustard and cheddar cheese. Other menu items include spicy chicken wings called the Detroit Red Wings.

The first Lions & Tigers & Squares opened in the spring of 2018 on 23rd Street in Chelsea. This space is larger, with a 50-seat dining room and a bar. The sidewalk cafe arrives in the spring.

Nicoletta closed last December at this address after six-plus years in business. They are still delivering pizzas from somewhere. 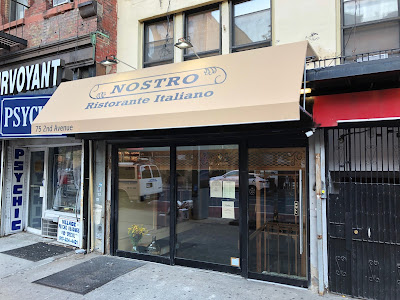 The low-key Italian restaurant is now open at 75 Second Ave. between Fourth Street and Fifth Street.

Expect to find an array of pastas and staples such as eggplant parmigiana ($12) and grilled salmon ($17). Not sure what their portions are like — the prices look reasonable enough.

This is the second outpost for Nostro, which got its start out on Fifth Avenue in the Greenwood Heights/South Slope area of Brooklyn. (EVG contributor James Maher is a fan of the Brooklyn location!)

No. 75 has been vacant since ZaabVer Thai closed in the spring of 2018. 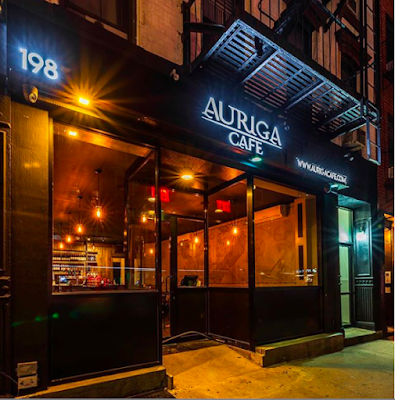 The cafe at 198 Avenue A between 12th Street and 13th Street had been in soft-open mode since early September ... with the grand opening taking place last Thursday.

Auriga Café is the second venture for David Duran, who owns nine-year-old El Camion two storefronts to the south. With this space, he's offering "upscale comfort food" with aspirations of filling a dining niche left by former Avenue A mainstays 7A and Sidewalk Cafe.

The menu features a variety of burgers, salads, soups, etc. Find the menu here. There's also a weekend brunch with breakfast and lunch entrees. Breakfast and lunch service will begin the second week of November.

No. 198 was previously Empire Biscuit, which faded into potato peeling' infamy in early 2016.

It's weirdly empty. He needs to do some more PR, b/c El Camion is awesome. If I'd known it was his spot, I'd have stopped in.

My favorite comment about Detroit style pizza is, “What makes it Detroit style? Is it on fire?🔥 LOL 😂 If this place didn’t have the deep pockets and pizza expertise of the Artichoke Pizza guys I’d give this less than a year to survive, but if the pizza is any good it just might make it.

Auriga is operating the same exhaust equipment used by Empire Biscuit, which is highly disruptive to tenants in the building. He refuses to do anything about it. Shame on him. bad business. bad neighbor.

Giovanni, Emmett's in SoHo is worth a visit for legit Chicago-style pie.

If the restaurant exhaust situation includes fumes, contact the Dept of Health at 311 - DEP and DOB are pretty much useless in this situation, and the local city councilors seem to have no interest in engaging in this hard reality issue, e.g, non identity politics, that affects so many downtown residents.

@3:38 PM. Thanks for reminding me, I will try Emmetts, even though I have resorted to making my own deep dish which is pretty good version but of course the flaky crust is not quite the same. The last time I was on the Upper West side I got a Pizzeria Uno pie to go, and when I got home I realized they forgot to take the pizza out of the metal pizza pan, which explains why the bag was so heavy, so that comes in handy too.

@2:35 Please contact our non-profit legal clinic maybe we can assist with hvac situation.

@2:14PM Actually I’ve have spent quite a bit of time in Chicago (several years) and also have family there, and people who live there actually do like to eat Chicago style deep dish pizza. The downtown Chicago spots do attract plenty of tourists, but their pizzas are as good or better than the places you can find all over the city and in the suburbs. Chicago’s NY style pizza is also not as good as ours, and is akin to the Chef Boyardee Pizza Kit that mothers used to make for their kids, also known as Pizza in a Box.

I just tried the Lions and Tigers Detroit Style Pizza and while it is not bad it is also not really pizza. It’s more like a pan fried bread with cheese and sauce. It reminded me of the local pizza we had at my college, where we had one pizzeria, run by a greek guy, and the crust was like cardboard, hard and fried, with inedible toppings. We called it Greek Pizza. It was so bad that a couple of students started their own pizza business out of one of the school kitchens, and it was much better.

Lions and Tigers Detroit style was definitely better than that college Greek pizza, but has the same fried tasting crust that sits heavily in the bottom of your stomach. The toppings are not bad, but the tomato sauce is definitely high in sodium and the sprinkled on Parmesan cheese tastes just like Chef Boyardee, so these slices are like a mashup of my bad college greek pizza and Chef Boyardee Pizza in a Box. It’s only $5 for 4 big squares in a box, so its practically like getting dollar pizza with better ingredients.

They blast Motown music at full volume, with the treble turned way up, so its hard to sit there and enjoy a quiet meal or even to have a conversation. The cashier is constantly yelling inaudible announcements into a microphone, giving away “free shots of water,” and announcing when your order is ready, and get ready to sit and wait. They take a very long time to reheat the pizzas, so by the time they come out of the oven they seem to forget whose pizza it was, and there was a lot of confusion about the orders.

At least it’s cheap and unpretentious, but there are better pizza places within a few blocks, and that includes Artichoke Pizza, the excellent Bakers Pizza on Avenue A, Luzzo and Gruppo for thin crust pies, and of course Joe’s Pizza.

thank you all for suggestions.
Empire Biscuit had 3 DEP violations, and a Cease &Desist order from the ECB enforcement, which did not happen because they could not get access to premises. Because I complained to the landlord about noise and vibrations, the landlord brought a frivolous court case against me to try and evict me. That she has rented AGAIN to a restaurant, using this same faulty equipment mind you, is unbelievable!.I contacted the ECB and even though the equipment previously had a C&D order status, a new business could operate equipment as is! unbelievable! The more people I show pictures of the unit to, the more I hear, "wow, how is this legal?" I live and work here. I am a successful arts professional. This is affecting my health and ability to earn a living. The test should be- for anyone involved in the decision saying it's ok to have this machine sitting right above me on the roof, "would you want this sitting right above your home?" . It's like a freight train is going by- 15 hrs a day. Aside from living with horrible conditions, seeking amelioration takes a great deal of time. 2 1/2 years , 24 hrs a day of empire biscuit , with 3 DEP violations, and I only finally got relief because they closed. I cannot believe this is happening again.

It’s 9:30 am and my apartment is vibrating. 25 hrs of this today. The DEP inspector said to get rubber bushings. What are you waiting for Mr.Duran?