The final days of Sidewalk 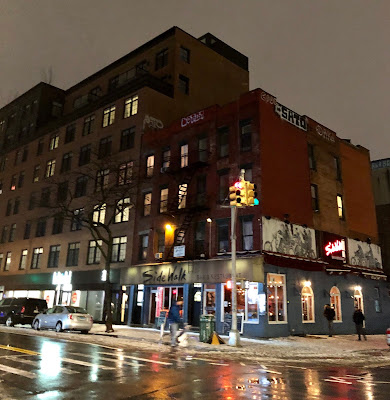 Sidewalk Bar and Restaurant is winding down its 34 years on Avenue A and Sixth Street this week.

Staff is telling patrons that the last day of service is Feb. 23.

As I first reported on Dec. 10, hospitality vets Laura Saniuk-Heinig and Alyssa Sartor are taking over the space. (Saniuk-Heinig is the general manager at the Bar Room on East 60th Street; Sartor co-owned August Laura in Carroll Gardens.)

Many current Sidewalk fans are curious if the new owners will continue on with the nightly live music program, including the country's longest-running open-mic night.

In December, Saniuk-Heinig told me in an email that "we are looking forward to keeping the music aspect of the room still alive. Exactly what kinds of shows, we do not know yet." She also didn't know what the name will be moving forward.

In an email from early February, she said "Still working on the name and music aspect."

Sidewalk opened in the corner spot in 1985 ... eventually expanding to the space next door when Sophie's relocated to its current home on Fifth Street.

Previously on EV Grieve:
New owners set to take over the 33-year-old Sidewalk Bar & Restaurant on Avenue A
Posted by Grieve at 4:30 AM

Wow. Another fucking end to another era. When does it stop?

Hypergentrification claims another neighborhood stalwart. Though to be fair, Sidewalk itself went more upscale a while back. Didn't lose its soul, though.

This sucks. Another one bites the dust. RIP Sidewalk.

Sophie's was at former Sidewalk location? I thought it was always at its 5th St location.

Before Sophie's was sold and moved from Avenue A in 1986, the bar on Fifth Street was called the Chic Choc.

The actual bar at Sophie's now was moved from A... a woman named Sophie Polny was the owner there. Bob Corton took over the ownership in 1986. (His brother Richard is one of the current Sophie's owners...)

On the one hand, sad to see another local business go under. On the other hand, the service there was terrible, and the food wasn't worth putting up with a staff that was disinterested at best.

This has nothing to do with gentrification! Had been going there for years, and stopped cause of the rapidly decreasing food quality and resentful service. Sad to see it go, but it left a long time ago.

I started going to Sidewalk back in the 80’s. They had the best veggie burger and the side salad with carrot dressing, YUM! It was a cool place with the grooviest waitstaff and the fashionable demimode of the EV. As the years passed and the menu unfortunately changed I stopped going but I did pop in about 4-5 years ago and it resembled a frat house dining room with appalling food and horribly rude waitstaff... some things better left as a pleasant memory

This had everything to do with gentrification. In the old days people went there for the food and atmosphere, and would not have tolerated bad food in a loud frat house environement.

Our culture is dying in front of our eyes, all because the kids from Generica have moved to the Big City and dont know what good food tastes like. They want beer, burgers and fries, bottomless brunches and an Uber to take their drunk asses home afterwards.

Artists and musicians have an aesthetic sense that required regular restaurants to live up to a higher standard. Even the food at Veselka was better back in those days, as was Kiev, a hole in the wlll diner that had amazing food.

Now its all about the alcohol and the lifestyle. Culture is dying, just look at the music industry and what a bunch of dreck it is producing on a global scale.Sidewalk got away with lowering their standards for years because most of their customers couldn’t even tell the difference.

Can't believe they outlived the superior food at 7A