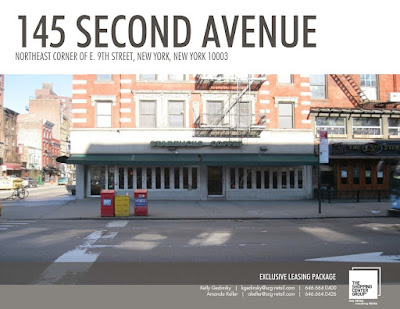 Marketing materials have been in circulation for 145 Second Ave., a retail space currently in use as a Starbucks at the corner of Ninth Street... 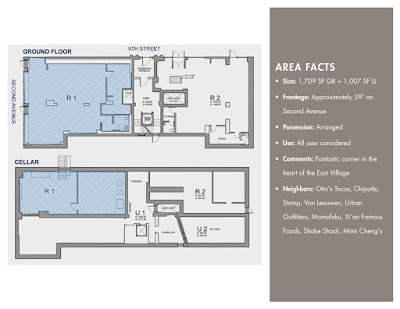 According to the listing via the Shopping Center Group, the price is "negotiable" and the possession is "arranged."

Last June, Starbucks announced that it would close 150 "poorly performing company-operated stores" in 2019, "mostly [in] urban areas that are densely populated with Starbucks locations," as CNN reported.

If this outpost does eventually close, then that makes the second local Starbucks in recents months to shutter. The Starbucks on Broadway at Ninth Street closed in early January.

Other EV outposts are located on First Avenue at 13th Street, First Avenue at Third Street and Avenue A at St. Mark's Place. The 23-year-old location on Astor Place received a major interior renovation last fall.

Email ThisBlogThis!Share to TwitterShare to FacebookShare to Pinterest
Labels: for rent, Starbucks

Any place that offers clean tables, free wifi and has decent coffee is a better alternative than Starbucks these days. I stopped by Ess-A-Bagel in StuyTown and they have all of the above plus good hazlelnut coffee and great bagel sandwiches.

I still don’t forgive Starbucks for taking the corner space on 1st Avenue and 13th Street that Mee Noodles was going to move into. The mid-block location is not helping Mee Noodles business, and they tell me this winter their walk-in business is way down. Same thing goes for the Silver Spurs space on Boradway, which became Teavana, then a Starbucks, and then closed. Everything that came before a Starbucks was better than Starbucks.

Unless Starbucks starts to offer better food options, and cleans their tables and bathrooms, they will basically just be NYU studyrooims and pitstops for Crustys and cab drivers using the bathrooms. Those overpriced super-caloric drinks cannot be a sustainable long term business model as more people move away from sugary drinks, and their coffee still tastes burnt.

This location never made a lot of sense to me, with the massive saturation in the neighborhood.

I'll miss that location. Not for the coffee, but for the air conditioning. On hot summer days it was like walking into a meat locker. Their Con Ed bill must have been stratospheric...

It's too bad, their bathroom had everything. A seletion of free poppers, a lube dispencer, a service station. And if the service station was having a profitable day, he wouldn't rob you.

There's an old rumor that the basement/cellar of this space leads to a buried section of a tunnel under Second Avenue that was built for the Second Avenue Subway. (And that the tunnel is only two blocks long) No one has ever confirmed this, and urban explorer types are VERY motivated people so I have to imagine neither tunnel nor entrance exists, but you never know...

@Sophocles. The only place I’ve been that is colder than this Starbucks in the summertime is Western Beef in Chelsea. The whole store feels like a meat locker because basically it is one.

northeast corner? the "shopping center group" might want to get their compasses out

I nominate Westside Market for the coldest place in the summer (actually all year round) award-I have to wear a parka and gloves to shop there.

I'll second staccato 66's call to "bring back The Orchidia", a real EV institution. Or even the very cozy very affordable Mediterranean restaurant that occupied that space after Orchidia. I'm not particularly anti-Starbucks, but I don't see the advantage in all of the failed "big-corporate-money can afford the rent" openings that fail shortly after they begin. Maybe if everyone had flat out boycotted these operations the corporates would have seen the folly in trying to replace our favorite locals. I do realize it's more complex than that and involves write-offs, etc. But, I still feel if we just said "No", it would make a huge difference.