Updated 2/14: The CB3 committee reportedly voted down the air-rights transfer.

Tonight, reps for Real Estate Equities Corporation (REEC) will appear before CB3's Landmarks Committee at 6:30 to discuss transferring the air rights from the landmarked — and under-renovation — Hamilton-Holly House across the street at 4 St. Mark's Place.

With these air rights and approved zoning variance, the Morris Adjimi-designed building REEC planned for the northeast corner of St. Mark's Place and Third Avenue would rise to 10 stories — twice the size of the original plans.

And as you sort through the various zoning documents (this link goes to the PDF on the CB3 website with details on the proposal) and public records for REEC, some familiar names emerge from behind the scenes.

James Capalino, arguably New York's most prolific lobbyist, has ties to the Rivington House scandal... and last spring he reportedly agreed to a $40,000 settlement with the state's ethics watchdog that investigated his dealings with a nonprofit created to promote Mayor de Blasio's agenda. (In August 2016, de Blasio said that he cut ties with Capalino, who has represented several big-money developers seeking City Hall approval for their projects.)

Meanwhile, as the Post reported last November, the city paid Kramer Levin Naftalis and Frankel LLP $2.6 million, de Blasio's legal-defense bill during investigations by state and federal prosecutors starting in 2016. Investigators closed the probes in 2017 without bringing charges against the mayor. (In late January, City Council passed a bill that allows elected officials to fundraise to pay off legal bills, though it excludes lobbyists, holding companies and corporations from donating, as The Wall Street Journal reported.)

Public documents show the scope of lobbying work that the firm Kramer Levin Naftalis and Frankel is doing on behalf of REEC... 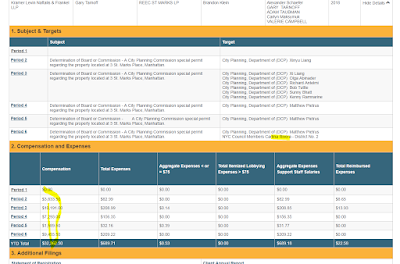 A retainer agreement from Capalino to REEC on public record (PDF here) dated from last May 8 shows that there were already plans in place for a building larger than the current zoning allowed. The letter doesn't state dimensions for the building, only that: "Consultation will provide pre-certification and post-certification government relations expertise regarding the Uniform Land Use Review Procedure [ULURP]."

The CB3 Landmarks Committee meeting tonight is at the JASA Green Residence, 200 E. Fifth St. at the Bowery.

Developers of 3 St. Mark's Place are looking to double the size of their proposed office building at 3rd Avenue to 10 floors with air-rights deal

Concern over potential air-rights transfer for new office building on St. Mark's Place and 3rd Avenue
Posted by Grieve at 4:15 AM

The parasites are at it again.

Yes yes yes THANKS Grieve for the follow through!

Another Tech thing. Please tell me Carlina is not listening to Capalino again.

De Blasio is not liked even in NYC, so he will never go further, how he made it to mayor is a fluke