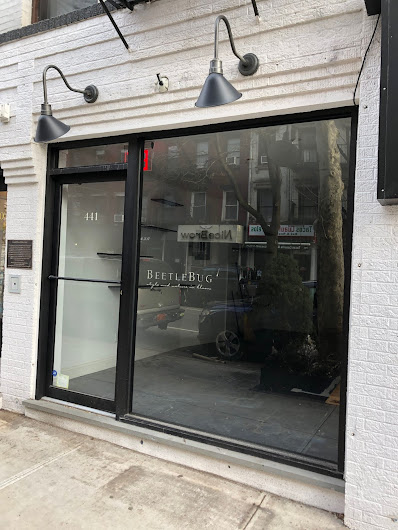 Several EVG readers have noted that BeetleBug, the floral design shop, has been emptied at 441 E. Ninth St. at Avenue A.

There's no message on the site's website or social-media properties about any type of closure. (They do have operate a small-scale market and flower farm in the Hudson Valley.)

BeetleBug opened in early 2017, and they were the first tenant in Icon Realty's renovated retail spaces here at 441 E. Ninth St. (aka 145 Avenue A).

According to one previous retail tenant here in 2015, Icon either wasn't renewing leases or offering new terms with unmanageable rent increases. (Icon bought the building for $10.1 million in April 2014.)

The last previous tenant to leave — in February 2016 — was the Upper Rust, who found a new space in Chelsea for their antiques.

Another new business along here, Mahalo New York Bakery, which served Hawaiian-inspired desserts, closed back in fall after seven months in business. That 300-square-foot space is now for rent with an ask of $4,500 monthly, per the Icon website. Let this be a warning to anyone looking at an Icon space to launch or move your business to, it won't work, you will lose your money and Icon will wait for the next victim.

Look, a nice row of shiny new upscale empty storefronts. They look so nice an innocent, just like the giant plant in Little Shop of Horrors, until it suddenly gobbles up everyone who dares to come inside. Welcome to the East Village, aka Midtown South, where retail dreams go to die.

Another casualty because of Icon Realty was Space Mabi at 67 First Avenue on the corner of 4th Street. As noble neolani (9:09 a.m.) wrote . . . DON'T BE A VICTIM OF ICON REALTY. ICON REALTY chased out STAGE RESTAURANT at 128 Second Avenue between 7th Street and St. Mark's Place. Hopefully, ICON REALTY will "REAP WHAT THEY SOW"!!! KARMA!

Sad news for BeetleBug, though I ended up benefitting. they left a beautiful, large "bonsai in training" in the planter outside of the shop after vacating. I rescued it on Saturday night, it looks great in its new planter. Here's hoping it survives longer than BeetleBug!