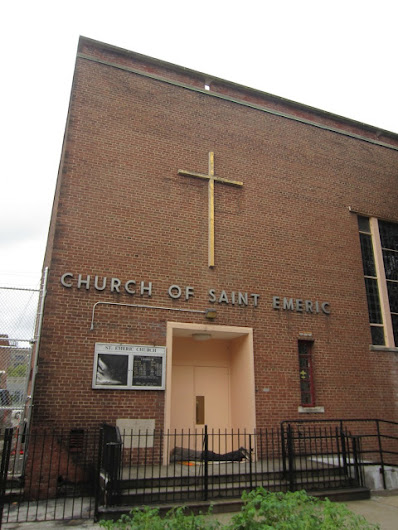 There is some development news to report about the former Church of Saint Emeric, which has sat empty since merging with St. Brigid's in early 2013.

St. Emeric's, built in 1950, is on a lonely stretch of 13th Street near Avenue D. The church sits next to the NYC Department of Environmental Protection's Manhattan Pumping Station and across the street from the Con Ed power plant ... 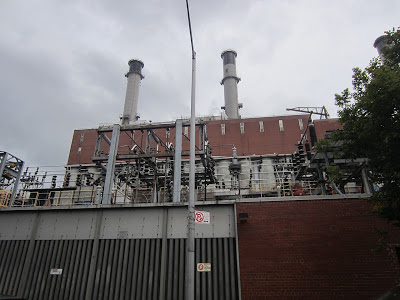 As Curbed reported late last week, the Archdiocese of New York is considering a proposal to turn the 300,000-square-foot property, which includes a former school, over to a land trust for 400 units of below-market-rate housing.

The Cooper Square Community Land Trust has offered to partner with developer Jonathan Rose Companies to create a mixed-income community ...

The Archdiocese has already committed to devoting 100,000 square feet of the property toward affordable housing — though they have yet to define tenant income requirements — on land that houses the former Church of St. Emeric. But housing advocates say the church should further its charitable mission by devoting the entire lot to low- to middle-income housing.

[I]f the trust’s proposal to develop St. Emeric's is accepted, the project would also include community space, as well as services for mental and physical health, senior services, and educational programming. The group would fine tune the plan based off of community feedback.

And if all this goes through, given the proximity to Con Ed, the land would require environmental remediation from contaminated soil.

Meanwhile, the Archdiocese doesn't seem so keen to convert the former Church of Nativity on Second Avenue between Second Street and Third Street into similar housing.

The Church closed after a service on July 31, 2015, merging with Most Holy Redeemer on Third Street. In the summer of 2017, the archdiocese desacralized the former church, clearing the way for a potential sale of the desirable property.

The Cooper Square Community Land Trust ... offered to buy Church of the Nativity for $18.5 million (with $5 million in closing costs) over a 30-year period, but the Archdiocese has instead expressed interest in seeking market value for the land and using the funds to address needs at the Most Holy Redeemer and parishes across the city.

The Cooper Square Community Land Trust is currently organizing a town hall this spring with Community Board 3 to discuss "how decommissioned churches can be best utilized by the Archdiocese and the communities they once served." Something other than demolishing them to make way for ultra-luxury condos.

Previously on EV Grieve:
Looking at the Church of Saint Emeric on East 13th Street

Educator: Turning the former Church of the Nativity into luxury housing would be a 'sordid use' of the property
Posted by Grieve at 4:02 AM