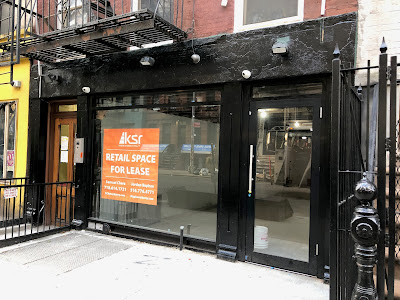 The owners of Craft+Carry plan to open a new location of their craft beer shop at 116 Mark's Place between Avenue A and First Avenue. They will appear before CB3's SLA committee tonight for a new liquor license for the address, which was recently renovated into a retail space.

According to the application on the CB3 website (PDF here), the proposed hours are 11 a.m. to 3 a.m. daily. The questionnaire shows the space will have a six-seat bar and a counter to accommodate four more people.

Craft+Carry, which currently has locations in the DeKalb Market (since June 2017) and on Third Avenue (September 2017) in Gramercy Park, sells several hundred varieties of craft bottles and cans to take home... there's also a small bar with a rotating batch of taps and free Skee-Ball. (Among the other amenities: the Crowler machine, which employees can draft beer for customers at the bar, and homebrew equipment and recipe kits. )

Here's a look at the outpost in DeKalb Market ...

The CB3-SLA meeting is tonight at 6:30. The location: the Public Hotel, 17th Floor, Sophia Room, 215 Chrystie St. between Houston and Stanton.
Posted by Grieve at 4:30 AM

We already have one of these exactly one block away on 9th Street between 1st and A: Good Beer. It's a great shop -- check it out!