First signs of Bin 141, a new cafe on Avenue A and 3rd Street 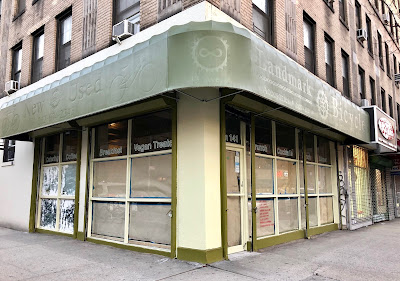 Updated: The restaurant opened on April 21.

The first signs of the new cafe coming to the northwest corner of Avenue A and Third Street arrived on Monday (the address is 141 E. Third St. aka 43 Avenue A). 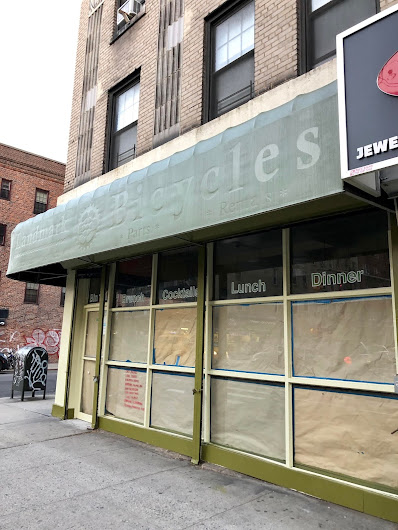 Imen and Rafik Bouzgarrou, the husband-and-wife team at Angelina Cafe one block to the south on Avenue A, are behind this venture that will serve Mediterranean fare. (No word at the moment if they'll continue running both Bin 141 and Angelina, which first opened in 2002 before relocating across Avenue A to its current spot in 2012.)

CB3 OK'd a liquor license for this space last July. The Bin 141 application (PDF here) listed 15 tables accommodating 54 diners along with an eight-stool lunch counter. Their proposed hours were 8 a.m. to 11 p.m. Sunday though Thursday; until midnight on Friday and Saturday.

During the CB3 meeting, a rep of the building's co-op board as well a building resident "spoke in support of this applicant as a longstanding, responsible business owner on this block who has operated a quiet, comfortable well-run restaurant," per the minutes of the meeting.

The previous tenant in this corner space, Landmark Bicycles, closed in the fall of 2017.
Posted by Grieve at 4:16 AM

Rafik says that NYSCA is a terrible landlord (his current location).

He's a very nice person and runs a nice restaurant, but "Vegan Treats" triggers me.

weird, I thought this was competition for Angelina but I guess not. Also I've always been confused how you have a cafe that isn't open for breakfast. The hours for the new place make more sense