[Updated] More mystery over those mysterious concrete barriers on 10th Street; our Stonehenge? 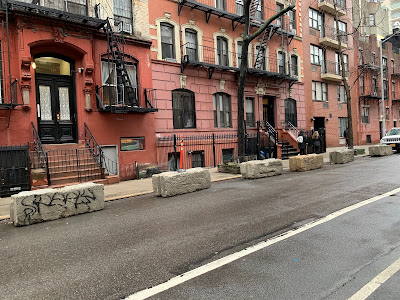 As noted on Sunday, residents are mystified over the arrival of these six concrete blocks on 10th Street between Avenue A and First Avenue.

CBS2 is now on the case. "Residents, sanitation crews and even the police are confused as to why the blocks are there," the station reports.

Without saying why, a Department of Transportation spokesperson told CBS2 reporter Scott Rapoport to contact Con Ed about the chunks of concrete.

An EVG tipster confirmed that Con Ed is behind the behemoth barriers (OK, they're not that behemoth). The usual orange barrels are too easy to move and blow away too easily... so the contractor in charge wanted something sturdier, per the tipster.

And someone has removed the barriers, as TXNYCgirl noted in the comments... Con Ed had its subcontractor – Triumph Construction – remove the blocks. Spokesperson Michael Clendenin claimed the plan was to “block” off space to install gas service to a neighborhood building.

“We’ve had trouble before where cones and tape and the normal things you do to mark off the site,” Michael Clendenin alleged.

“This time they used the blocks so it could not be moved to make sure when other workers got there they’d be able to do it. Obviously this is something we apologize for it shouldn’t have been done that way...”

While the construction company had a permit to work at the site, the city issued them a summons and a $1,200 fine for taking up parking with no workers on site.
Posted by Grieve at 9:30 AM

And now they're already gone! As of last night. (I actually saw them arrive last Monday).

For a minute I thought it was the beginning of stone version of Walter De Maria’s art installation known as The Broken Kilometer, or maybe the beginning of a new skateboard park. In any case the blocks of stone looked better than all of those parked cars.