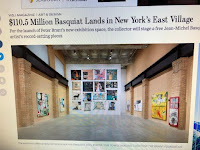 The Wall Street Journal (subscription required!) checks in today with a preview on the inaugural exhibit at the Brant Foundation, 421 E. Sixth St. between Avenue A and First Avenue... the one featuring Basquiat that starts next Wednesday...

[Peter M.] Brant could have launched with a legacy show of his own trophy holdings, but he says the space’s proximity to Basquiat’s former stomping grounds compelled him to devote the opener to the neo-expressionist painter. Basquiat’s frenetic, poetic paintings of 1980s New York are getting more attention lately from both museums and the marketplace, with pieces selling at auction for as much as $110.5 million. That record-holder, an untitled skull painting from 1982 that’s owned by Japanese e-retailer Yusaku Maezawa, is in Brant’s show.

Other heavyweights include 1987’s Unbreakable, which has never been exhibited in New York, and 1983’s Hollywood Africans, which was lent by the Whitney Museum of American Art.

Half of the show’s roughly 70 pieces have also come directly from a Basquiat survey that recently drew nearly 680,000 visitors to Paris’s Louis Vuitton Foundation. These works will now be intermingled with 16 pieces from the Brant foundation as well as loans from other collectors like Dan Loeb, John Phelan, Eli Broad and Dimitri Mavrommatis.

The Foundation says 50,000 people have already signed up online to get free tickets. The show runs through May 15.

Meanwhile, Andrew Russeth at artNews has thoughts on all this...

A formidable new arts space opening in the East Village is cause for celebration. But what happens after the Basquiat show comes down? If the foundation becomes a repository for blue-chip art and big names, for showing off trophies acquired over a lifetime of collecting, that would be a painful development for the cultural life of this city. New York already has plenty of spaces to see such things. Instead, my hope — as I wrote back in 2014 — is that the Brant Foundation and its brethren will be willing to experiment, and to partner with other local organizations, serving as a forum for art and artists and ideas that have not been welcomed elsewhere.


Previously on EV Grieve:
Here's how to reserve free tickets for the Basquiat exhibit opening next month at the Brant Foundation on 6th Street
Posted by Grieve at 3:00 PM

It's so nice of this guy to do this. Security + production fees is super expensive. Free tix!

Hopefully it begins a stirring of interests in the arts in our community. Thank you Brant for doing this!

Well then, I know what I'm stealing.

So sterile inside especially compared the free Same Old Gallery which opened at Basquiat's former home/studio last year at 57 Great Jones St. One was created by a billionaire, the other by Basquiat's schoolboy friend who grew up in Jacob Riis and co-created SAMO.

Exhibit is free, so I can't complain about it. And there won't be a line. Look forward to seeing the building and the paintings. A New Yorkish experience.