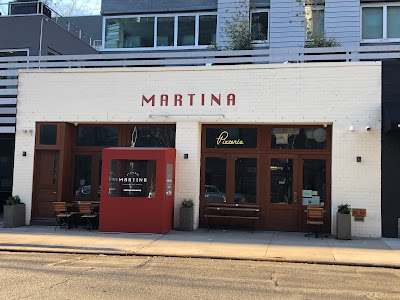 In case you missed this from back on Friday, Danny Meyer's Union Square Hospitality Group announced that it is closing Martina, the high-profile pizzeria on 11th Street at Third Avenue, Eater first reported.

March 31 24 is the last day. In a statement, Meyer said that "despite numerous efforts to turn around Martina's financial performance around ... we were not able to succeed at developing a large enough audience to sustain the business."

In December, Meyer and Co. changed up formats for this offshoot of Marta, switching from a quick-serve format to table service. (The pizza reviews had been so-so.)

Martina opened in August 2017 in a newly created space at 55 Third Ave., aka Eleventh and Third, the 12-floor residential building on the corner.
Posted by Grieve at 4:00 AM

Some advice for you, Danny Meyer: taking CASH PAYMENT would have made a big difference! You wanna go "cashless", that's your choice, but you lost a LOT of $$$ from those of us who don't want to be forced into paying with a debit or credit card.

Learn a lesson, all you businesses for whom cash is somehow undesirable: you don't even KNOW how much income you're losing with your crazy policy. That goes for Dos Toros and Mimi Cheng's as well. I don't patronize those places b/c I will only pay in cash.

Ironically, USHG invested a couple years back in coffee purveyor Joe, which had been cash-only from its early 2000s inception — until a time it wasn't! And then attracted an investment from said restaurateur.

On the issue of going cash-less, it seems that Business 101 would teach you that you'll make MORE money if you take cash AND credit/debit than if you limit yourself to only one of those options.

I don't see why that concept is so hard for anyone to grasp, much less for someone like Meyer who has been in this business a long time.

Maybe Meyer just talks to consultants these days, and not to actual POTENTIAL CUSTOMERS who want the OPTION to pay in American cash! A truly service-oriented mentality would provide that OPTION. Do his other restaurants take debit/credit only??

A restaurant does not need an "audience". Stop it with the eatery performance art and try giving people what they want: plain old good food.

Martina closed because the pizza was awful - a cracker with sauce. Ughhhhh.

For what it's worth, I can see why some of those fast-casual lunch places near Union Square would go cashless during the lunch rush -- it really does speed things up, especially compared to counting out change.

BUT, as anon 10:47 pointed out, it seems like bad business to reject paying customers unless the restaurant is truly packed to the gills (maybe between 11:30am and 2:30am on weekdays).

Obviously, the real reason these establishments are going cashless is because they'd happily turn away a few customers in an effort to collect as much DATA as possible.

@12:18pm: Making ANY customers feel unwanted ("you'll hold up the line if you want to pay cash, we can't allow that!" said no one, ever) is a GREAT way to wreck a business, IMO.

And I also will not contribute my share to the "data scooping" either. I realize lots of entities already have my data, but I don't have to hand MORE of it to them in exchange for a pizza or a burrito. If people thought about it, they'd realize that maybe they really don't want their exact eating habits so widely disseminated.

Martina wasn‘t even pizza, it was warm cheese on a cold cracker. I’m surprised they asked this long — at least they didnt stick around while bleeding cash like Nicolette. I went there once. Between the cold pizza, which lost all of it’s thermal heat after 2 minutes while sitting under a blasting ac duct, the no cash policy, the no delivery policy, the uncomfortable chairs and ice cold tables, the bottled of champagne to compliment a $13 pizza that. Was less filling than a slice at Stromboli’s. I never went back to the first pizzeria which was not only cashless, it was pizzaless as well.

This is what Giovannidamus predicted when Martina opened. Even Zoltar could see this one coming:

This place was great, but it was lacking. Maybe the price point vs self serve and the seating situation.

@3:17pm: It was like self-serve but with an attitude; there's something SO sterile & off-putting about the vibe there.

And the idea that people are going to drink Champagne with pizza is both ridiculous and offensive simultaneously!

Now that Martina’s has failed, Danny Meyer can try out a few more of his foodie concepts:

Bartina: It’s just like Martina, only without the food. No crackerized pizza, no weird little faux-Italian side dishes, no food at all. Now you can enjoy nice cold bottles of champagne in a quick serve environment without the hassle of having to order and eat any food at all. Bank wire transfers and US Treasury Notes accepted.

Steak Shack: It’s like Shake Shack, but with flame-broiled steaks instead. Formerly known as Tad’s Steaks. Bitcoin only please.

Jell-O Village: Hello! Do you like Jell-O? Well then you will love Jell-O VIllage, where everything is made out of Jello-O, including the decor: Jell-O Burgers, Jell-O Fries, and Jell-O Shakes. Canadian currency and Greek drachmas accepted. Concept is currently on hold until we can find a replacement for spokesman Bill Cosby.

Credit cards siphon 4pct of net from the owners pocket to the banks. 4pct of 1 million is 40,000 dollars. Just say no . Pay cash. Support local business owners not the banks. The Capital One in Union Square doesn’t need another wing.

The closure of Martina isn't entirely a surprise to those of us whom live in the neighborhood. The expensive and overall product is much like the consumption of saltine crackers topped with flavorless cheese and tomato sauce dispersed with a few toppings. I worked as both a waiter and as a bartender for Danny Meyer during the early 2000's. He's a self-serving idiot. Going cashless was a colossal mistake at this location not to mention eliminating tips from the front of the house staff involved at his other establishments throughout Manhattan. Who doesn't like or prefer cash? No wonder many of his restaurants are vanishing. Oh well.

The usual argument in favor of "cashless" is that the employees can't have their hands in the till. And I always wonder what kind of owner or manager has that POV on their employees, b/c not everyone has their hand in the cookie jar; maybe the managers just don't know how to hire the right people. OR maybe the managers can't recognize an honest person?

No matter what, the attitude that you are going cashless to keep your employees from stealing from you undercuts any sense of trust or loyalty among your staff, I'd imagine.

Maybe that's why Martina's has such a bland, blank vibe.

Danny Meyer has several legendary restaurants, including 11 Madison Park Gramercy Tavern, and Union Square Cafe, so I don't think of him as an "idiot." But Shake Shack is glorified fast food, and I agree that Martina justifiably failed. Meyer is famous for his "hospitality," but sometimes I wonder if I'm being served by friendly robots or humans. And why are they always so young? Where are the middle-aged and late-middle-aged servers?

I have worked at restaurants here in Manhattan where it was the management who was pocketing cash and the tips from the front of the house. They have access to everything, including the end of the night reports and cash tips. Some would erase what we wrote on the slip, change it to a different amount, and put the rest in their pocket. I worked at a few well-known spots where we would be missing hundreds of dollars from our checks; this continued for years sadly with no one held accountable. Now, I will not name these establishments, however, it is common for places now to go cashless because of this, and to their credit, it does diminish robberies during business hours. I have friends who were embroiled in class action lawsuits against high-end businesses where managers were putting their hand in the cookie jar. The staff fought back and won handsomely. I guess the removal of cash here was to eliminate that risk factor altogether seeing as it has become a trend in the NYC restaurant community. I do think when you employ people, you are trusting they will make the right and mature decision when handling cash. Ultimately, the consumer should have the freedom to pay however she or he wants to. This establishment could have been better had there been a different execution, menu, price range, and staff.

People complain about cashless like it's strictly the businesses that decided to go this route. Have you ever observed people buying stuff in 2019? The majority of people will break out a card now even for the smallest of purchases.

I agree that Martina sucked but so what if they were cashless. Who cares, life is too short to fret over trivial matters. Electronic fund transfer has been a currency for a long time now. You can fight the tide or go with the flow. It's everyone's free will to decide, but why fight. IMO. Life is short. Who cares if the government is spying on you. If you are living above the law, you have nothing to worry about. Credit and debit cards offer convenience and a measure of security. It's not entirely evil or one-sided. Oh, but god forbid they charge a fee in exchange for the service. Dang it I am not standing up for banks. Just trying to point out basics. Credit card companies are evil but that doesn't mean people have no choice but to overspend or abuse credit.

I went there after a CL ad for a job and was treated awfully by the Union Square Hospitality Group, or whatever they call themselves. I am 50 y.o. I had NO CHANCE OF BEING HIRED. They were rude, incompetent, and I saw it was a complete waste of time and resources. How sad. And I agree with most everyone else re: cash less. I DO NOT WISH TO SHARE MY DATA FOR A FUCKING PIZZA. And I do not wish to give data to a company just to try them out. READ AND LEARN. CASH IS A LEGAL CURRENCY and SHOULD BE ACCEPTED EVERYWHERE. DON'T WANT MY CASH? THEN GO OUT OF BUSINESS. Finally found a good job, though, with health insurance.