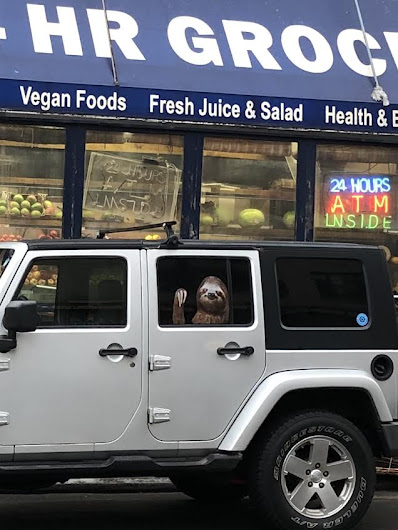 The 10 things that NYC should do with Amazon’s $3 billion subsidy all have 1 thing in common (Curbed) ... and Bloomberg's article, Amazon’s Escape From New York, includes this Steph Davidson photo illustration of Jeff Bezos as Snake Plissken... 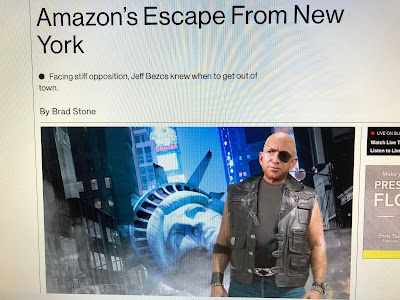 The old Bowery Savings Bank at 190 Bowery is headed to auction, where it could fetch upwards of $50 million (Bloomberg)

Some East Village architecture history (Off the Grid)

And here's the cabaret action in March at Pangea on Second Avenue between 11th Street and 12th Street ... via the EVG inbox:

Tammy Faye Starlite will tangle with Marianne Faithful's "Broken English." Raven O is going to dance cheek to cheek with Sinatra. Claywoman will be put under the microscope thanks to special guest John Cameron Mitchell. Jazz phenom Tammy McCann measures up to the great masters from Ellington to Wonder. And Zachary Claus stands up for the woman in us all in “Hey Girl.” Five incredible performers taking risks, flying without a net and landing, we think, almost effortlessly.

[The cabaret room at Pangea]
Posted by Grieve at 11:30 AM

Disappointing that this blog would link to a curbed article that's a perfect embodiment of the naivete and misinformation that killed the Amazon deal which was primed to bring over $27bn in tax revenue to NYC. The $3bn in tax rebates that they would have received DOESN'T EXIST. And people think we have that money just sitting around to fix the subway...newsflash, you know what would have actually helped fix the subway? 27 BILLION DOLLARS.


Why does a company with billions in profit need billions of New York’s money to bring 25,000 jobs to a city where it already has a significant presence?

There’s little correlation between cutting deals with big companies and improving a state’s employment or income picture. Most incentives go to employers that would have come to the state, anyway.

Amazon’s deal should have never happened in the first place. Google is hiring 20,000 people in New York and isn’t asking for this kind of corporate welfare, and neither is Facebook. In the Amazon giveaway plan, they only planned to hire 700 people in the first year — that’s about the same number of people that Eataly employs. Most of the good paying jobs would have been for seasoned executives from other companies outside of New York.

People are acting like this is a major loss, but this isn’t Atlantic City: New York is a city with 4 million jobs! Even if Amazon hired the total 25,000 promised over 12 long years (which is doubtful—they probably would have just shifted many of the jobs from their Seattle, Manhattan and Staten Island offices) that’s still just a drop in the bucket in exchange for giving up tax incentives worth $100,000 per job.

For the same $3 billion we could give grants and loans to 3,000 small business at $1 million each, creating even more jobs spread out through the city, and support small busineeses who buy from local suppliers and hire local employees. This wouldg generate far more tax dollars and local economic activity than Amazon ever would, which made $11 billion in profits last year and paid zero in federal taxes.

@Billsville - Wow, you truly don't understand the deal that was agreed upon. The tax subsidies were only to kick in if they added 25k jobs in NYC. The subsidies would only exist if they kicked in their promised tax revenue to the city.

The $3bn you speak of LITERALLY DOES NOT EXIST. It was a rebate back to Amazon on the $30bn of taxes they would have paid over 10 years, which could, you know, fix the subways. There is a financial illiteracy epidemic in America, and this particular symptom of it will have real negative consequences for the city. Massive missed opportunitiy, plain and simple.

The point of the Amazon deal was to get an anchor tenant in LIC. Instead, Amazon will continue to grow (less quickly) in Manhattan just like every other company, worsening congestion and slowing the pace of development along the waterfront. Losing that Amazon deal was *so* stupid. "The facepalm heard round the world" is right.

Good riiddance to the Amazon deal and all the sycophants who continue to support it. This was a corporate welfare giveaway that no other company had ever demanded or gotten, mainly because this is New York City, not Podunk USA. We don’t have to pay companies to be here. Every major company wants to have a presence in New York, and they can afford to pay for it without the giveaways,

The reality is that Amazon had always planned to expand in New York anyway, they were just looking for the city to subsidize their shiny new object in Queens. Instead, Amazon proved they are as thin-skinned as the real estate lobby that also supported this deal REBNY wanted it because it would help speed up gentrification and increase housing prices across the boroughs. If you donlt think Amazon is a toxic bad neighbor, just look at Seattle, which they are turning into another San Francisco with wildly unaffordable housing and a rising homeless probem which they refuse to let the city do anything about,

@2:01pm: I'm sorry, but I think you are wrong here, b/c Billsville did NOT talk about $3 billion that "doesn't exist", rather, he simply said, quite correctly:

"For the same $3 billion we could give grants and loans to 3,000 small business at $1 million each, creating even more jobs spread out through the city, and support small businesses who buy from local suppliers and hire local employees. This would generate far more tax dollars and local economic activity than Amazon ever would, which made $11 billion in profits last year and paid zero in federal taxes."

In other words, if NYC and NYS were willing to commit $3 billion to job creation in NYC by supporting smaller local businesses, THAT use of $3 billion would have a far greater (and more diverse) impact on NYC than Amazon (which, as noted, did not pay ANY Federal tax on its profits last year) ever would.

According to most people here I’d be a “tech bro” given my career and age, and I’m glad the Amazon deal fell through. This is New York, we don’t need to get excited about bribing a Ruby Tuesday’s into our township which is what this is pretty much equivalent to. If I wanted to work in an office park tech campus I’d move to Palo Alto. I can say with certainty that if I ever leave the startup/mid-size realm Amazon is the bottom of the barrel of the big players I’d want to work for based on everything I hear about their corporate culture.

Also, it’s the epitome of NIMBYism to come to the blog and freak out about EV tech hubs but then get indignant that another neighborhood feels the same way. Literally, definition of, “not in my back yard”. That being said, I really bet this is astroturfing of some kind, I’m seeing the same types of posts all over Reddit and the paranoid side of me can’t help but think this is a think tank propaganda machine working over time to do damage control in favor of corporate welfare.

I guess we were expected to subsidize all those 150K jobs (does that include benefits?) that Amazon was going to bestow upon us. If you make those 140K jobs instead, I think that will more or less cover the $3 billion. You say you can't get quality employees for only 140K a year in New York? Okay, we'll throw in free metro cards, museum passes, and $500 Shake Shack gift cards...

Have you ever seen any company walk away from billions of dollars as quickly as Amazon just did? Obviously, Amazon didn’t need the $3 billion dollars. What they needed was a city that would do their bidding, like building a special helipad for Jeff Bezos. So when local leaders started asking for more in return, Amazon decided they couldn’t handle being a good neigbor or having a dialog with the various stakeholders. In fact, Amazon ditched the deal just 2 hours after meeting with residents and community leaders about their concerns. Amazon already had the backing of both the Mayor and the Governor, and they still couldn’t take the heat.

People were right to question Amazon’s intentions and integrity, and Amazon proved the doubters right by pulling the plug on the deal without any notice, and before any meaningful dialog could even occur. This is the same city that has kept the anti-union, local business crushing Walmart out for decades, so it should be no surprise to Amazon that their demand for massive corporate welfare was not welcome here.

A few things: 1) The point of the deal wasn't to bring jobs to NYC, it was to bring them to LIC; 2) the city wasn't writing a check to Amazon for $3 Billion, we were going to give them a tax break totalling $3 Billion over 10 years; 3) LIC residents had a legitimate beef with the Amazon deal because their rents were set to spike and the character of their neighborhood was going to dramatically change (even more than the dramatic change that has taken place over the past decade-plus. If the deal had included allowances for affordable housing, rent control on existing tenancies, relocation subsidies for those who wanted to move, etc. that may have curbed the backlash a bit. Ultimately, the collapse of this deal is bad for NY but probably good for LIC