The vote for NYC public advocate is today 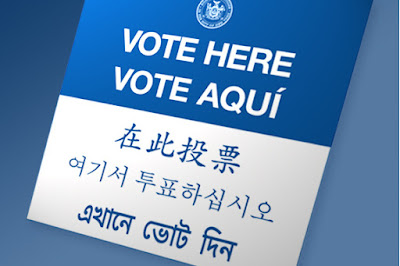 Updated 2/27: City Councilmember Jumaane Williams a Democrat, won the election with 32 percent of the vote.

The special election for public advocate is today in NYC. (Letitia James, the previous public advocate, was elected as state attorney general back in November.)

Why should we care about this election? What difference will my 2-3 votes make? Per Town & Village:

While this is a role with little governing power, it’s widely seen as a stepping stone for individuals looking to become mayor or to gain other prominent positions.

As to why New Yorkers should bother with this race, there is also the fact that the office exists to be a watchdog, a check on the mayor.


So if you want a quickie refresher on the 17 (!!!!!) candidates before heading to the polls, here are some sources for you:

Thanks for this. It's strangely impossible to find this info, particularly all in one place.

Piece of cake voting at Theater for the New City this morning: no waiting, everyone in a good mood, all machines working, etc. So let's vote people, for big elections as well as small. If nothing else it's practice, practice makes perfect, and it just might help us to form a more perfect union.

I voted today. I was one of 3. So just walk in and do your duty. I vote against ONE PARTY RULE. Felt great!

I voted for a Democratic party candidate, and it felt great too!