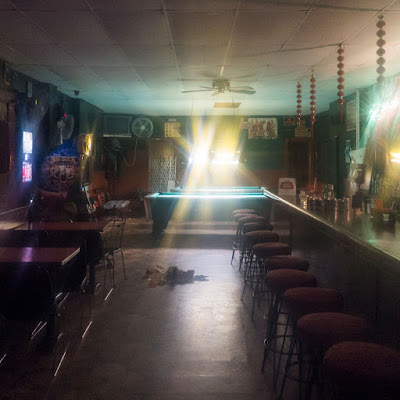 While out on early morning walks the last two-plus years, East Village-based photographer Daniel Root began taking pictures through the windows or doors of empty neighborhood bars at daybreak. The shots became part of an ongoing #nybarsatdawn project on Instagram. He recently wrapped up the project after shooting 974 bars and walking some 1,500 miles.

I asked Root how this all came about and the joys of walking around the city in the early morning hours.

How did this project get started? Did you take a photo of a bar at 6 a.m. and think you might be on to something?

I used to walk the dog along East River Park every morning at daybreak. After she died in August 2016, I realized I wasn’t walking as much and I need it for whatever mental health I have. I decided to walk into the city rather than long the river for a change of pace.

As I passed Vazac’s I noticed the “closed/empty bar lighting” and took that picture. That little discovery got me looking into other bars, first in the East Village, such as Niagara on the next corner, then expanding to downtown in general. 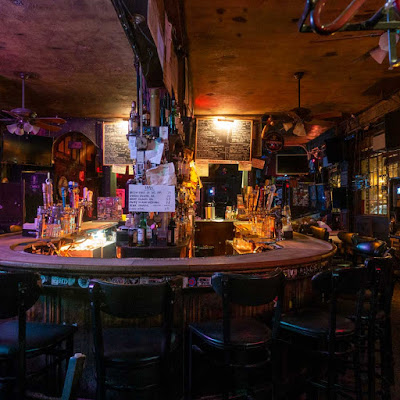 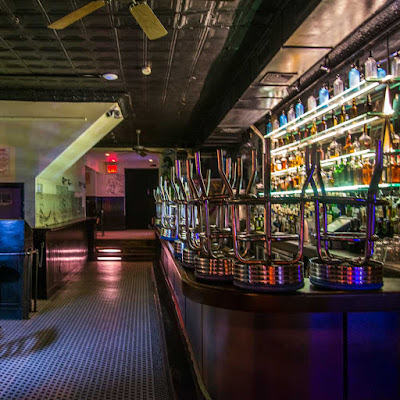 What is most striking thing to you about the bars at this hour?

What first struck me about seeing familiar, public places at dawn was how different they felt/looked empty and quietly lit. Some bars had “closed lighting,” a small string of party lights in the back or under counter lighting at the bar. Some were just dark, lit by the glow of the cash register, the red light of the exit sign, or a side door left ajar with the light peaking out.

While I shot some places after sunrise the lighting was much more unusual and dramatic in the predawn lighting. The other before sunrise was best.

I started thinking of them as “bars at rest,” taking a break from a long night and getting ready for the day to come. Then it occurred to me I was anthropomorphizing bars which seemed weird, but there you have it. 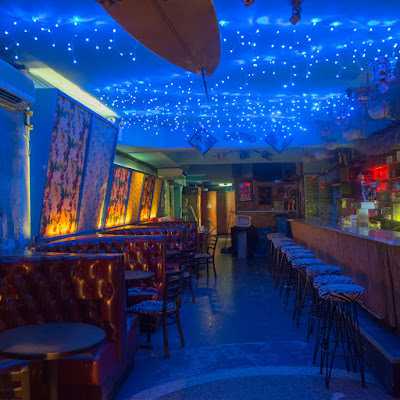 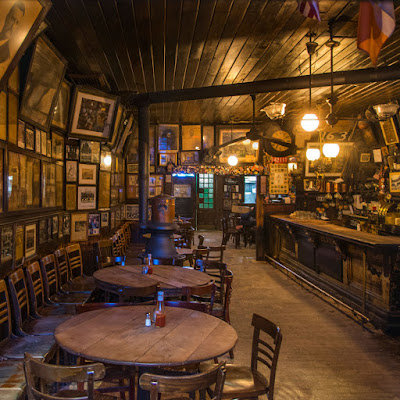 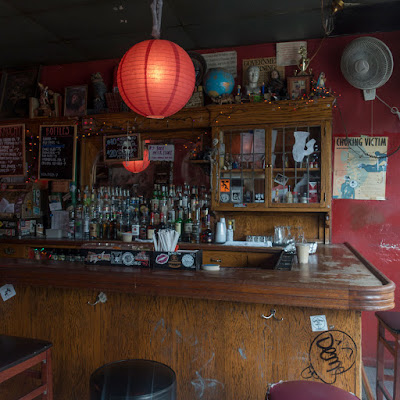 [The Library, Avenue A]

Did you think about expanding this to the five boroughs?

I kept this project mainly downtown because I wanted the walk. Occasionally I would get on my bike if I wanted to get a particular/classic bar — for instance, Jimmy’s Corner on West 44th Street — which was outside of a comfortable walking distance to get to before dawn. I played with the idea of biking across the Williamsburg Bridge to explore that area but, once again, walking is more of the pace I enjoy in terms of looking and seeing.

How often did you encounter people still in the bar?

Many places that sell booze by the glass close well before 4 a.m. On the other hand there are many bars that stay open until the 4 a.m. closing time. Then there are the bars that pull the gate half way down and keep going. Our neighbors and EV Grieve readers can probably guess which ones are the “past 4 a.m.” bars but a couple of them surprised me. One used to be going around 6 a.m. most Tuesdays.

Then there are the porters. Some arrive right at closing time, others an hour or two later, and others midday. If I saw a porter I would always explain what I was doing because some of them thought I was shooting in some sort of an official capacity.

Any profound thoughts on NYC nightlife hit you during this bars-at-dawn tour?

I always knew I liked New York when it was relatively empty but finding that emptiness seems to be getting harder. Years ago my-then girlfriend and now wife, Rina Root, and I would walk around areas like Wall Street or Tribeca on a Sunday because it was so quiet.

Now most places are fully residential with activity all day, every day. The one time it is truly quiet, except for the occasional drunk/junkie/commercial garbage truck, is between 4 a.m. and 6 a.m. I highly recommend walking at those hours — you’ll experience a very different city. The people out at that hour are mainly hard-working people at work or going to work. The drunks and junkies tend to make a lot of noise — it’s easy to just cross the street if you hear them coming. So far I have had very few ugly encounters but I am certainly aware that one has to be alert to avoid problems.

Was this an Instagram-only project, or do you have further plans for this series?

This started as a personal project that lent itself to Instagram. Then the possibility of doing something more with it came about but that didn’t come to fruition. The idea now would be to have a show in a local gallery or do a book. If anyone would like to do a book or has any ideas of where this could go please let me know. 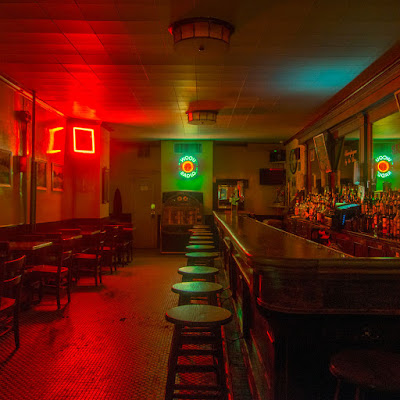 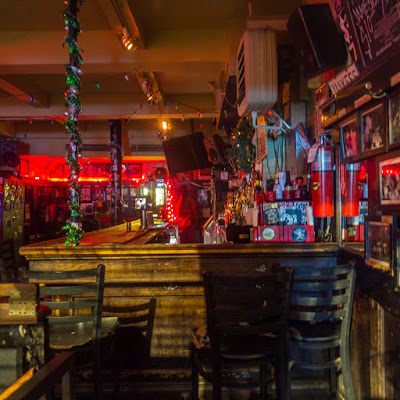 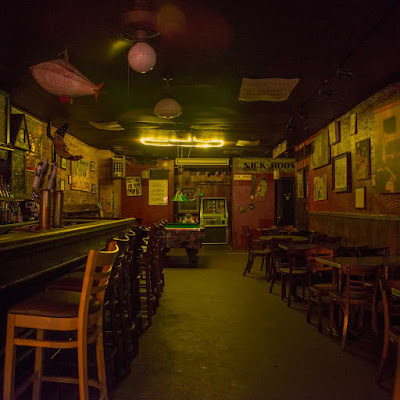 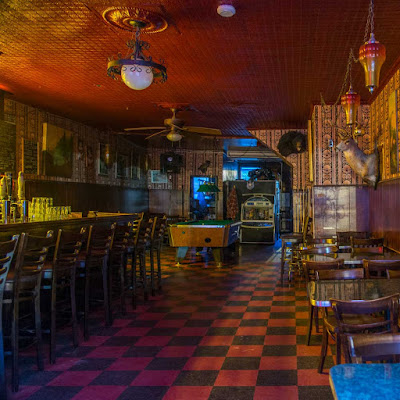 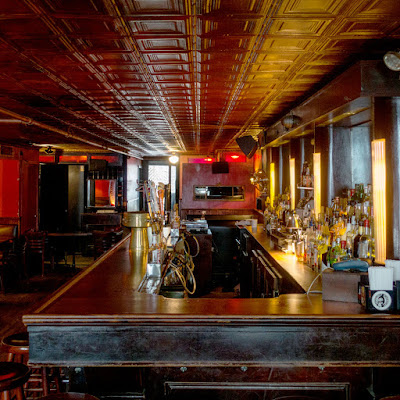 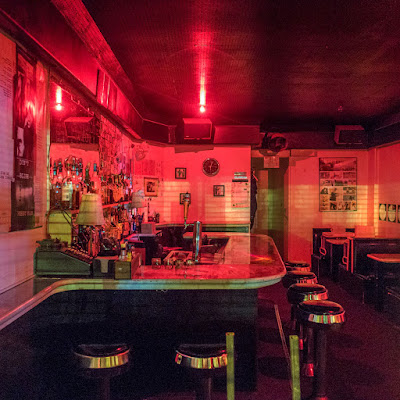 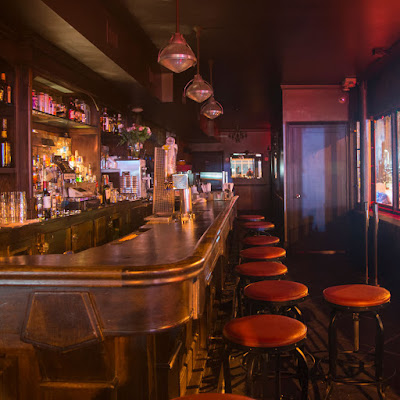 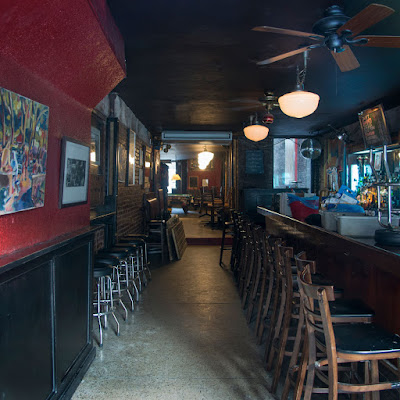 So . . . how does he get in those places at that hour to compose these beautiful shots?

Stephen, they were all done from outside with the lens directly on the glass to eliminate reflections.

A few years ago there was a blogger named Marty who had a blog listing bars he visited all over the city. He couldn't afford staying in NYC anymore so he moved to moved to Chicago, I think. Was a cool guy indeed, he reviewed a few of my books. Maybe EVGrieve recalls his last name, I can't...

The 1 and only Marty Wombacher! 🍻

He blogs at Meanwhile, Back in Peoria...

these are fantastic! what a great idea, and so beautifully shot! also a great reminder of how many wonderful little bars we all still get to enjoy! thanks daniel root & grieve!

Usually waking up at bars at these hours are not a good thing. Glad this artist found a way to make the bars look respectable at these early hours.

These are fantastic photos, well done! I can almost smell the beer odor wafting up from the floorboards.

Someone should tell Marty Wombacher that he needs to come visit and tell us how his Midwestern bars compare to ours.

@Mykola: Thanks for the shout-out! I'm actually in Peoria, hope you're doing great!

@EV Grieve: Thanks, my friend, nice to be back in the comments section after all these years!

@Giovanni: I'll be back on April 11th to do a Marty Monologues Show in NYC! More details of that to come soon!

And I love this idea and his photos are spectacular!

These look wonderful. Would love to see a gallery show of them in the neighborhood.

Hey Grieve, when you pass Daniel on the street at 5am, do you wave at each other, or nod, or is it just too awkward?

Dont forget the one and only Sidewalk ... which is closing on Feb 23 ... hope all of you show up for its last call!

How many times I thought to myself, "Man that would make a beeyoootahfull picture".....
in that instant just before I passed out in my favorite NYC bars.

A gallery of these photos would be awesome! How about any of the numerous vacant stores on Avenue B? 44 Avenue B, in particular, seems like an easy pop-up gallery!

These should be a flashcard-memory game for those of us who lost so many brain cells at these places. (It was fun/scary being able to guess which bar each pic is.)

Through this post on EV Grieve Lola Saenz contacted me about including some of the bar photos in a group show. The show is at Theater For the New City and opens on April 1st and it runs for 5 or 6 weeks. If you are at the opening please stop and say hello. Thank you all for the encouraging words.

We need more after hours...sniff sniff