St. Nicholas of Myra Orthodox Church in the morning 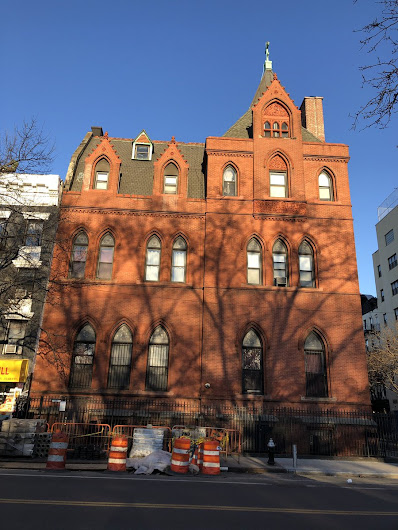 A view this morning of St. Nicholas of Myra Orthodox Church on 10th Street and Avenue A.

Some history of the landmarked building via The New York Times in 2008:

The church, at 288 East 10th Street, near Avenue A, was built in 1882 and 1883 as the Memorial Chapel of St. Mark’s in the Bowery, one of the city’s oldest Episcopal parishes, as the gift of Rutherford Stuyvesant, a descendant of the Dutch governor Peter Stuyvesant, in memory of his wife.

In 1911, St. Mark’s rented the church, which served members of the area’s large Eastern European immigrant community, to the Holy Trinity Slovak Lutheran Church, which remained there until St. Nicholas of Myra Orthodox Church, a Carpatho-Russian congregation, assumed the lease in 1925. The church is named for the archbishop of Myra (located in what is modern-day Turkey), who is a patron saint of children, sailors, merchants and students. The congregation bought the building from the Episcopal Diocese of New York in 1937.

The church is also known for its annual Cookie Walk ... perch for the red-tailed hawks of Tompkins Square Park ... and, now, the exterior for Maxine's apartment (that bathroom!) in "Russian Doll."

Previously on EV Grieve:
Your 'Russian Doll' reader
Posted by Grieve at 9:31 AM

Has anyone watched the highly advertised Russian Dolls series on Netflix? This building features prominently in the show, though the backstory is that it's an apartment building converted from an old synagogue.

@Anon 10:55 - I watched the show an enjoyed it, especially the locations. I think the show intends for the party scene to be at the old school on Ave B and 8th, but call it by this location for what ever reason. I could be wrong, but that's how I interpreted it. I was wondering if the interior shots were from the place on 8th & B.

I live in the old school on 8th and B and thought it was my building until they showed the exterior and interior stair shots. It’s not the 8th and B building.