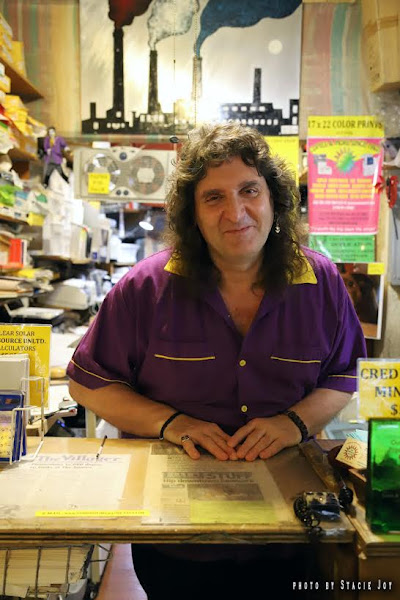 Santo Mollica of The Source Unltd copy shop is no stranger to EVG readers.

We all know about Santo’s musical history. But back in the day he had another gig, working for the now-defunct Comics Code Authority (CCA): The self-censoring arm of the American comic-book industry. What was a counterculture dude doing toiling in the red-pencil expurgating trenches? He'll explain in a moment.

But first, a quick backgrounder: The Comics Code was born in the McCarthy era, when a NYC psychiatrist named Fredric Wertham published a blockbuster anti-comics screed called "Seduction of the Innocent." It led to a 1954 Senate Subcommittee investigation at which Wertham testified, "I think Hitler was a beginner compared to the comic-book industry."

To avoid a government crackdown, the four biggest comics publishers created their own regulatory code, which prohibited the sympathetic depiction of criminals and the questioning of authority figures. Scenes of "horror, excessive bloodshed, gory or gruesome crimes, depravity, lust, sadism and masochism" were banned. "Profanity, obscenity, smut, vulgarity" and general filth were all prohibited. And "females shall be drawn realistically without exaggeration of any physical qualities." You know, for the sake of the kids.

The first cracks appeared in the code in 1971, when the government asked Stan Lee to address the dangers of drugs in a comic. Lee wrote a Spider-Man arc doing just that. The CCA refused to approve it. Lee published issues #96-98 without the CCA Seal of Approval, which marked the beginning of the end. That year, the code was adapted to allow horror, as long as it was "handled in the classic tradition of Frankenstein, Dracula, and other high-caliber literary works."

Cops, politicians and judges could now be depicted as corrupt, as long as the writers made them "pay the legal price." Moral ambiguity, sex and violence ramped back up. And underground comics, which ignored the code completely, gained popularity; comics stores and head shops began to carry comics without the Seal of Approval. The code was loosened further in 1989 (when openly LGBT characters were permitted) and dumped entirely in 2011.

Today, the Comic Book Legal Defense Fund, a nonprofit that fights censorship and protects comic-book and graphic-novel creators' intellectual property, owns the rights to the Comics Code seal. ("Spider-Man: Into the Spider-Verse" opens with an "Approved by the Comics Code Authority" stamp — perhaps an inside joke referencing the role Spidey played in destroying the code.)

But the 1971 rules were still in place when Santo began working for the CCA. (The following interview has been condensed and edited for clarity.)

When I was going to Hunter College, I was also a musician and didn't want to get locked into anything, so I had a bunch of little jobs. I delivered tip sheets for a guy who would handicap races at Belmont and Aqueduct.

He had a little mimeograph printer thing in his apartment, and he'd get his connections from the track and type up his predictions for the day and he had about six newsstands he'd sell them at. I'd deliver them to the six newsstands and end up across from the Lincoln Building at 60 E. 42nd St.

Then I found out about a job right there, proofreading. I thought, I can do that! Perfect location! Not too taxing! I go for the interview. It's mostly older people. I was maybe 18, 19. They pulled out these 12x18 sheets that were storyboards of comic books. DC, Marvel, Archie, Richie Rich. It was so cool seeing the pure artwork, the pencil work. The story and lettering and graphics. They weren't colored in yet, and they had to get approval to do that. My job was to stamp the back of each piece of artwork and initial it to say it was cool to go to the next phase.

I was a big comics kid. I grew up in the South Bronx. My mom passed when I was 5. Marvel comics, especially, actually helped me in terms of how to relate to people. Marvel was always big on empathy: Peter Parker had to wrestle with his guilt for not stopping his uncle from getting killed. Daredevil was blind.

Marvel’s thing was that the characters were always misfits, always struggling to deal with the gifts they were given. More than the DC guys, who were boring, perfect heroes. I really identified with Spider-Man because I liked the idea that no one really knew who he was. So many people would brag, but Spider-Man is the guy quietly saving the world. I had a big Spider-Man collection that would have been worth real money, but my older sister threw it out — let’s just say that was one nasty time. But who’d have known?

Anyway, I’m like whoa, the Job Gods are working for me! I’d do my route for the tip sheet guy and end up on 42nd Street, and I’d have breakfast and read comics.

Sometimes the artists would try to sneak things through – too much cleavage, too much nipple through the uniform. We’d have to tell them, "I appreciate your artistic integrity but the kiddies ain't gonna like this." Actually, the kiddies will like it but the parents won't. We'd have to bounce it back and they'd have to make the corrections and resend it. I always had to watch the V-necks.

Sometimes they'd slip in curses. One time they had Iron Man going, like, "Let's go get that bastard!" I'm like, "OK, man, I agree with your sentiment but that’s not gonna work." And we'd send it back and they'd correct it. They knew what was allowed and what wasn't allowed.

Violence wasn't a big deal by then. Some Tales from the Crypt were gory, but [the CCA] didn't care about gory – I guess that’s the American Way. Archie was pretty tame. Richie Rich was easy. Those were my least favorite. But you had to be careful because they were for little kids and you don't want to miss something.

I did it for about three years, and it was the first job I had where I was paid for time off in the summer. I was like, this is the motherlode! Granted, it wasn’t that much money, because I was only there a few hours a day. I lost the job when they started introducing 401(k)s and the guy who ran the organization said, "Hey, I can give this money to my wife and we can save for our retirement." So I lost out to the wife and that was that.

Growing up, I was on my own, pretty much. I mean, I had family. But whenever people get raised by other people, they always say, "I loved him like a brother" — and "like" is the operative word. "Like" is like and the real thing is the real thing. You know the difference. And you carry it with you.

I learned a lot from the comics about how to deal with people, how to conduct yourself, how to think about people with handicaps. You know, my lady's got MS and she used to have a cane — now she has a chair – that folded up just like Daredevil's. Peter Parker was pining, but he’d rather save the world than have everyone think "I'm something." Let the work speak for itself. Superhero-ing, writing, making music, saving the world. It’s all one.

Marjorie Ingall is an East Village-based freelance writer and the author of "Mamaleh Knows Best."
Posted by Grieve at 4:30 AM

Love Santo and his wife! They are good people, gems of the 'hood! I always look forward to popping in with resume & copy requests. Such a cool shop, too. Stop in for a beautiful art card — they have awesome cards and you can order custom stickers. He also has a small box and offers food donations for folks struggling with food insecurity. Now that's a REAL neighbor.

TERRIFIC READ. He sounds like a Good Salt-Of-The-Earth guy. Would love to talk with him sometime!

Love this! Thank you Grieve, Marjorie, and Santo!

One of the true gems of the neighborhood, a survivor from a time when the East Village was full of many similar small, interesting stores and proprietors.

WonderFULL story! Keep a smile on the dial, folks.

And Freddy Wertham is a perfect vintage example of "bomb rhetoric" that is central to the MAGA doctrine....substitute "the Free Press" for "the comic-book industry" in the above quotation.
Very Drumpfian.

I was also a Spiderman fan. I'm sure I identified with his humbleness. As I later did with the great George Smiley. Of course I also liked the James Bond movies, though Sean Connery was the opposite of humble. Go figure. My parents always let me read whatever I wanted. I don't think comics harmed me at all. Thanks mom and dad, I miss you...

An old skool neighborhood nice guy, friend to all, artist and small businessman. Love this interview. A good example of why EVG makes such an excellant ad free contribution to , not only those living in the East Village , but also , those of us who have been gentrified out and miss people like Santo Mollica.

I have been using Santos ' place since the mid 80's when as a writer and architecture grad, it was the only and best place to copy my work.
I still go there when I can because his color xeroxes are the best
And yes! Images exist and survive other than on a phone!.
I have nominated him as a Best Small Village in past and will continue to do so-for GVSHP.
I urge everyone to nominate him as well and give him business.
Kriti Siderakis

Santo, "Sandy" as I knew him from the Bronx days, is about the only one I have stayed connected to since I left NY in 1979.

A good man and a friend though we were brothers in arms for a while.