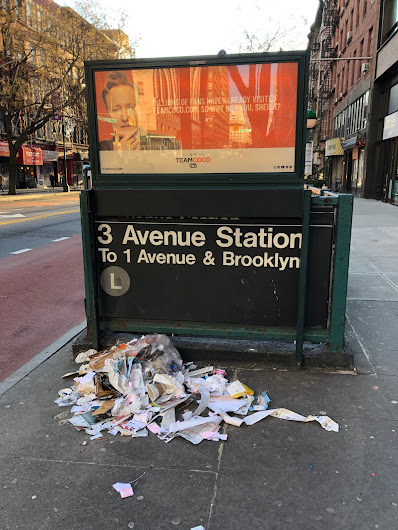 We'll go to David Meyer at Streetsblog for details of particular interest to this neighborhood...

On weeknights, service between Manhattan and Brooklyn will begin to slow just after the evening rush, at 8 p.m. Headways will grow to every 20 minutes after 10 p.m. — the current arrangement between 1:30 and 5 a.m. Weekend service will be significantly diminished, with 20 minute headways — up from as little as four minutes now.

Only one bus service improvement is certain: Hakim said 14th Street buses will run every three minutes on weekends, up from the current range of four-and-a-half minutes to seven-and-a-half minutes between buses. But the previously planned dedicated busway is no longer in the works, and the launch of M14 Select Bus Service, originally scheduled for April, has been delayed.

Hakim did not confirm whether stations at First and Third avenue will become “exit-only” due to large crowds that are expected to gather on the platforms because of the extended headways. She said only that the MTA “may” make those stations exit only.

And amNY has more from City Hall...

Mayoral spokesman Eric Phillips said the administration is still undecided on the busway and other street changes planned for the original shutdown — despite the MTA's belief that the bus priority wouldn't be necessary.

"As we learn more and more detail every day from the MTA about its closure of the L train, we’ll continue to design efforts and review existing plans to help affected riders," Phillips said in a statement.

Gothamist has a nice recap here... reactions include this statement from Transportation Alternatives ... and...

The de Blasio admin potentially backing out of a 14th St Busway is cowardly and short-sighted. That’s my statement.

"Today the MTA confirmed our fears that the new L Train plan will bring little to no alternate service enhancements, the loss of the 14th Street busway, possible exit only stations at 1st and 3rd Avenues, delayed subways, and historic overcrowding. I'm extremely concerned. So far, this is not a plan that will avert a shutdown. It’s an effort to steamroll a quick fix over the public.

The MTA has promised to take community input into account as it moves forward. I'm pleased to see that they are planning to expand M14A service, and I hope to see much more done to help riders. I know they will be hearing from many constituents in my district, who are being left without real options."

The MTA hopes to start the L-train rehabilitation work during the last weekend of April, as previously planned. Hakim said that they'd be public outreach sessions in the weeks ahead.
Posted by Grieve at 4:14 AM

Here’s the money quote from Gothamist: “MTA officials warned in an internal memo obtained by Gothamist, commuters could expect "on board crowding greater than anything ever experienced on the NYC subway system on a sustained basis.”

Wow. Will the MTA be renting out chastity belts to protect us from all the gropers?

Why does anyone think this is better than a shutdown?

Cuomo breaks a detailed plan to look like a hero then walks away from his worse solution. Bad situation made worse.

Will there be on increase in Avenue A buses, too, or just the D, which is already served at the expense of A riders at a rate of about 5 D's to every 1 A?

MTA already IS a private corp, like the Federal Reserve. Since no shutdown? Those asbestos toxins will be spewed far & wide thru the entire subway system for years. 911 First responders syndrome will be inflicted on million of commuters. Beware