Temporary closure at Jimmy's No. 43 may be permanent 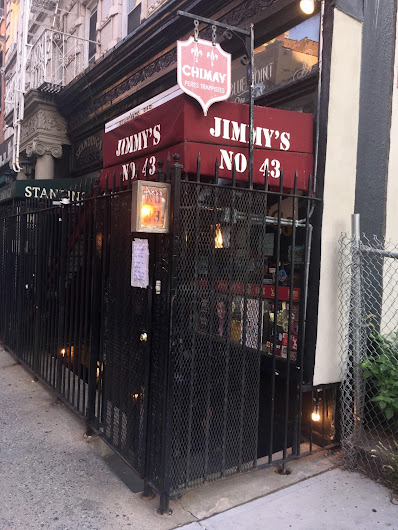 Jimmy's No. 43 closed without much notice on Aug. 9 over at 43 E. Seventh St. between Second Avenue and Cooper Square.

A "gone fishin'" sign appeared on the door noting a temporary end-of-summer closure for repairs.

However, as owner Jimmy Carbone tells Gothamist, Jimmy's No. 43 may not be coming back at all.

The lease has been up for two years — Carbone has been operating on a month-to-month lease since then — and in February the landlord "dialed it up" and told him that Jimmy's could stay but he would have to start looking for a partner to help with back rent and, in the meantime, he'd have to pay more to remain, according to Carbone. He says it's been a long road getting to this point.

Carbone says the financial difficulties started in 2010 when the city began issuing letter grades for bars and restaurants. Jimmy's was inspected five times in six months and Carbone says it took him three years to pay off the $15,000 in fines as a result of those inspections. In 2013, Jimmy's was shuttered twice by the Health Department, first because of rodent issues that stemmed from Hurricane Sandy; another time because Carbone couldn't afford to pay the fines.

"I have to believe that we're closed for a revamp and there's going to be someone who realizes there's a great location in the East Village that people know about that's ready for a business partner."

Email ThisBlogThis!Share to TwitterShare to FacebookShare to Pinterest
Labels: Jimmy's No. 43

Jimmy is a genuinely nice guy. The beer selection, food, and atmosphere always made for an enjoyable visit. I certainly wish him the best going forward.

Now I realize why restaurant owners put up Closed for Renovations signs without doing any renovations. They are looking for partners to help pay the bills, or maybe buyers.

This would be a loss. Great beer, often interesting food and fun events from time to time.