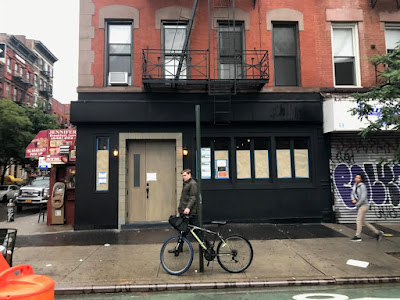 Several readers have noted the opening-soon sign at 67 First Avenue at Fourth Street ... where Space Mabi has set a Sept. 19 opening date... 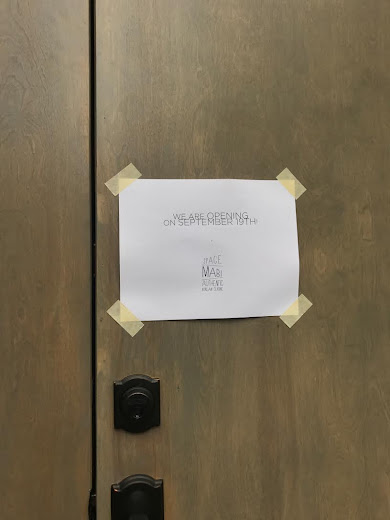 Here's more about the concept from the questionnaire for a liquor license here (CB3 approved this last month):

Our team is planning on making the space ... an intimate but stylish restaurant/bar which seeks to gather people of all backgrounds to share in a Korean dining experience with tapas influences. Exploring traditional flavors and dishes while utilizing modern cooking techniques and ingredients, artful plating and portion sizes, we hope that the authenticity of the food and the enjoyment of the dining experience will invite patrons for generations to come. It is our goal to realize something appropriate that addresses our aspirations and priorities.

We also want to provide the space to the community in the mornings and afternoons so that they can have utilize the space for working, studying, having group discussions, catching up with others, etc.

Dishes on the sample menu include a fried tofu ball, avocado salad and soy rice cake to start, and a variety of kimchi dishes, among others.

The proprietors were previously behind a similar venture on Fifth Avenue at 30th Street called Space Nabi, which closed in the spring. (It was a cafe in the morning hours, with food and drinks later in the day.)

The previous tenant, the Venezuelan restaurant Guayoyo, never reopened after an early-morning basement fire on Jan. 13, 2015.

Gastropub — 'Your new playground' — slated for former Guayoyo space on 1st Avenue
Posted by Grieve at 4:05 AM

"a Korean dining experience with tapas influences" - erm, what? Altho I will admit fried tofu ball sounds tasty, might wander by to check them out.