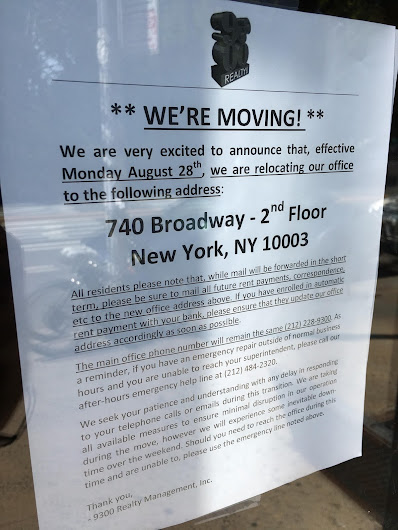 Over the weekend, these "We're moving" flyers appeared on some of the East Village properties owned by Steve Croman's 9300 Realty.

As noted, the company has a new office on Broadway as of today.

Not noted is that this move follows eviction proceedings against 9300 at their previous location, 632 Broadway. According to the legal papers filed in public records, Croman and company had until today to get out — or the Marshall would legally take possession of the space... 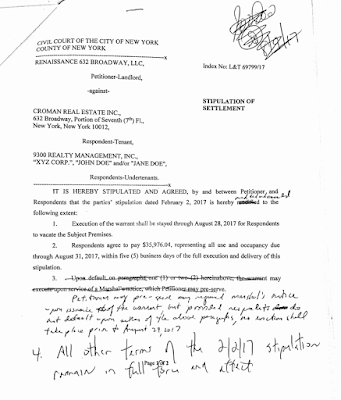 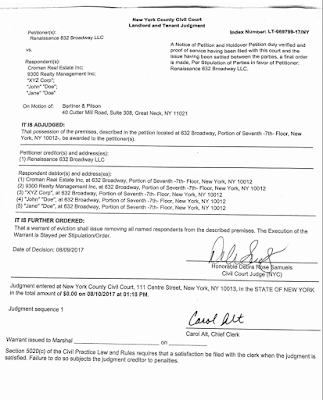 In June, Croman pleaded guilty to charges of grand larceny, tax fraud, and an additional fraud charge relating to false statements. As part of the deal, he will reportedly spend one year at Rikers. Croman will be sentenced on Sept. 19.

Meanwhile, last week, the civil case related to his tenant harassment tactics was adjourned from Sept. 18 to Nov. 13. 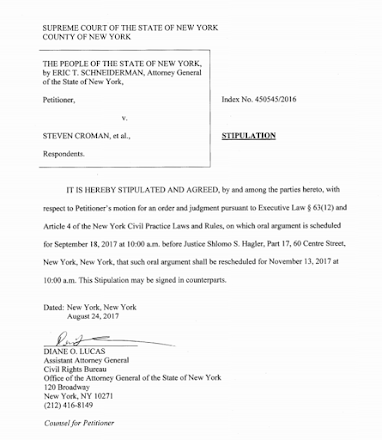 I wonder how many buildings in the EV are still privately owned vs LLC or in the hands of Croman and Kushner? Judging by who goes in and out of most building I would say at least half are "free market" these days still have any long term residents in them. I don't expect this to get better since our new neighbors will for the most part be transient, may not be interested in local politics not plan stay long enough to care what really happens here. I'm not saying give up the fight but please get involved with our community, support the small businesses that remain, pay attention to what is happening in City Hall and send emails to elected officials. We can't give up without a fight.

I had a Croman leased place for 5 years. I would send my check, they would claim it was late or lost and charge me a fee. I've never paid a bill late in my life. So I started just dropping the check off and asking for a receipt. Every month I'd hike over to that office, deal with the curt receptionist and repeat. This is some sweet poetic justice.

Just another ploy to cheat someone else out of money.

Is there anyone the Cromans haven't screwed?


The Cromans, Steve & Harriet Croman and now their new 'Associate' at Croman Real Estate, son Jake Croman (From berating the Uber Driver fame) own over 185 buildings in NYC. It would be interesting to see a chart of how many apartments Croman emptied out in each building. The Cromans and their lying lawyers harassed entire buildings of tenant families from their homes with frivolous lawsuits, wearing them down financially and emotionally, and clogging the courts with their bogus lawsuits, all on the taxpayers dime. Not providing heat and hot water and freezing them out and making them ill. Not doing repairs. The Cromans send their hired thug goons, such as their secret weapon, Croman's dick, Anthony Falconite to harass and terrify tenants. Another favorite tactic is exposing tenants to toxic contaminated dust from their renovations. (many which are illegal and done without permits or qualified workers). The tenants living in the building during demolitions and construction is like live in a war-zone. Now the courts are beginning to verify that so many Croman buildings have been illegally destabilized and the Attorney General just blew the lid off Croman's Bank Fraud.

The Cromans, Steve and Harriet Croman, and Jake Croman are a cancer on our society.

The Cromans, Steve and Harriet Croman, and Jake Croman are a cancer on our society.

Yet they, and Kushner, Schoul, Taleando, The Walentas and the rest of the scumlords continued to profit immensely and get away with these criminal tactics under the fauxgressive neoliberal corrupt mayor.

Posterboy Croman and all these predatory scummy slumlords, Kushner, Schoul,the Shaloms, Tolendano, the Walentas, etc.,etc. have been allowed to continue because of the dysfunction of the city and state agencies by not enforcing the laws. Theses agencies are useless and turn a blind eye. The courts are complicit because these criminal landlords keep them in business and the judges and court employees have their jobs because the taxpayers are paying for the Cromans of the world to profit by using their eviction mill lawyers and the courts to harass tenants and empty out their buildings, in order to raise the rents and profit from it. The politicians collude with these landlords & developers. Go check out the campaign contributions from the past - President Obama, Hillary Clinton, and Chuck Schummer, etc. all took blood money from the Cromans.

Enjoy Rikers Steve, it's better than the hell that awaits you & yours.

How can Croman still be allowed to have a license? Hi is he able to still function as a landlord and have a company where he is related to managing buildings in any way? I don't get it. Could someone explain this to me?

They still do all the same things as before- bad work, unsafe conditions, harrassment, not cashing checks. They need to be stopped for good because they will never change.

A special place in hell for the hell you put us through.

If they haven't, they're working on it!

Just happened to me. And I know another Croman tenant who has the same problem.

In other sordid real estate news, Steven Dym, a property manager who was being sued for stealing the rent receipts by the owners of a building in the East Village as well as from a condo in SoHo and several other properties, just blew his brains out at his luxury mansion in Westchester. But not before also killing his wife and daughter with a shotgun. Luckily his son was away at college, but now the son has to bury his whole family. This real estate mogul was living the good life, but that lifestyle costs money, and now three people are dead, all because he couldn't handle his scandals. Sad.

Revoke Croman's real estate license and save his tenants from future harassment and unsafe building practices. And save the taxpayers of NYC from all the frivolous court case costs.

You can fuck with the tenants, but not the owners. That's when the cops and the feds get proactive.

Same with Toleando, he must have tried to rip off his investors like Skreli, but he's lucky he's in the right business.

That happened to me the first time I paid them when they bought my building. When I told them the checked had cleared out of my account, they said "Can you prove it?" Have deliverrd in person since.