This has nothing to do with a new LinkNYC kiosk 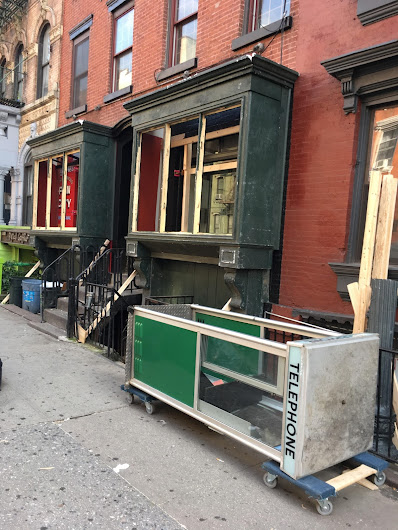 That toppled telephone booth is just a film prop... Crews are dressing up the front of 94 St. Mark's Place this afternoon... the filming here (and elsewhere) is for the Amazon series "The Marvelous Mrs. Maisel," a dramedy written and directed by "Gilmore Girls" creators Amy Sherman-Palladino and Dan Palladino.

The show stars "House of Cards" alum Rachel Brosnahan as a 1958 New York City housewife "who, through a series of events, winds up exploring the world of stand-up comedy."

Scenes for the pilot episode were filmed last fall at 7B/Vazac's/Horseshoe Bar.
Posted by Grieve at 6:43 PM

Oh God this sounds awful. Who comes up with this shit?

Can someone do a mini-series or a movie about the Harley Flanagan-John Joseph McGowan (Cro-Mags) beef? Now THAT would be entertainment LOL.

Since the beef began in '92 you wouldn't need much period props.

The phone booth wasn't big enough to store all the data LinkNYC harvests from people's phones. They tried but the door broke off.

Hopefully this show will be funnier than Jim Carrey's shitshow Showtime series "I'm Dying Up Here" which is yet another failed series about comedians without enough comedians. Only it isn't dying "up there," it's dying right on your TV screen, bigly.

Stop whining, Grievers. It's Amy Sherman-Palladino. It has to be awesome!