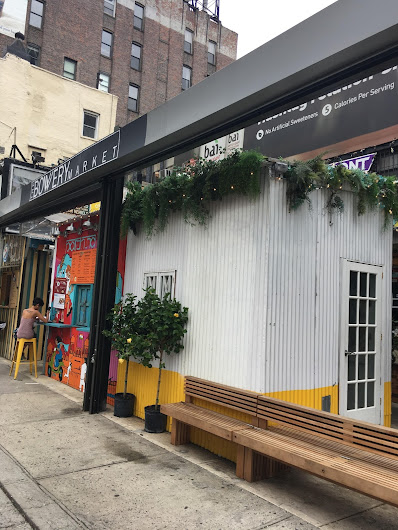 Parantha Alley has not been open this month at the Bowery Market, the year-round open-air food court at 348 Bowery and Great Jones.

Turns out to be a permanent closure for the vendors who specialize in Indian street food. (They opened here in May.)

A rep for the Bowery Market told me that the owners of Parantha Alley had a health issue and needed to end their lease here.

However, the space won't be empty long. Per the rep: "It was clear the neighborhood enjoyed Indian food at the market. Therefore, we are welcoming Dosa Royale of Brooklyn to the market shortly who will carry on with Indian food and bring an even more expanded menu of Indian food offerings."

The Dosa Royale name has been added to the food stall. 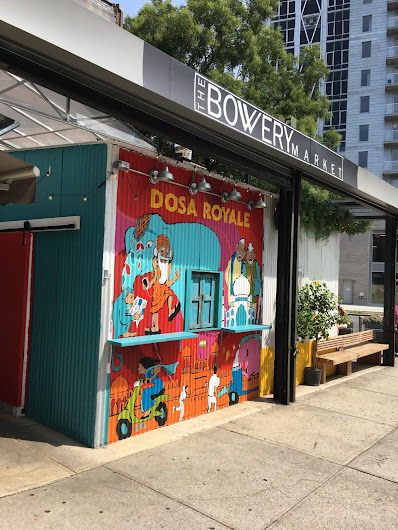 Here's New York magazine with some thoughts on Dosa Royale:

The menu is lengthy, with plenty of vegetarian options, dosas, and curries. South Indian favorites like ulunthu vada, a fried lentil doughnut, and kothu parotta — flaky flatbread layered with onion, eggs, spices, and yogurt — are must-orders. (Avoid the idly, a steamed rice cake that’s pucklike with a microwaved quality to it.) Skip the curries in favor of the namesake dish, the gigantic dosa royale, a savory crêpe made from fermented rice and lentils that is quite literally larger than the width of the table and filled with spiced potatoes and a tangy shredded paneer and spinach mixture, as well as mixed vegetables.

The Market launched in July 2016 with five vendors... and since then, the mini outposts of Champion Coffee, The Butcher's Daughter, Pulqueria and now Parantha Alley have moved on.

Dosa Royale will join current vendors Alidoro, Sushi on Jones and Oaxaca Comida Calle.
Posted by Grieve at 4:20 AM

Email ThisBlogThis!Share to TwitterShare to FacebookShare to Pinterest
Labels: The Bowery Market

i loved parantha alley and am very sorry to hear about the health issue; hope whoever is ill is feeling better soon!

Thank you so much for the positive comment and good thoughts. We are currently on the mend and after taking some time off to heal we are back at Smorgasburg on the weekends through the end of October.