In this ongoing feature, East Village-based photographer James Maher provides us with a quick snapshot of someone who lives and/or works in the East Village or Lower East Side. 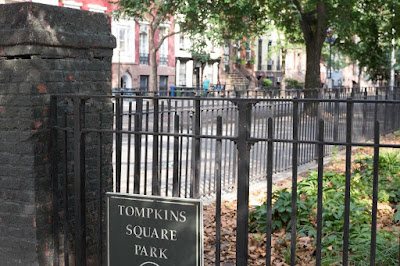 I grew up in Puerto Rico, but I came here when I was 22, and I’ve been here 50 years in this area. I worked as a teacher in Queens. I retired about three years ago.

The best thing is when I was dancing on 14th Street. They had a Spanish, Latin club with the music from Puerto Rico. I had a good time and danced — I used to go club by club. Oh my God, there were a lot of Latin clubs here. You would get dressed and walk around and you could dance. Special people and more community.

And I liked the time with the hippies. The hippies was a beautiful time, I loved it. But there were drugs. But you know what? They weren’t dangerous. The drug people, the addicts, they only robbed. But now, this is a scary time now. Scary. They have changed the buildings, the population, the Latin flavor is not here no more. Alphabet City used to have Latin flavor — now they have a different kind of people. It’s because of the rent.

I love St. Mark's. And 8th Street was beautiful. When 6 p.m. came, everybody would go to St. Mark's, the stores. They stopped that. They’re different. You can’t go there no more — it’s very sad. Manhattan is changing a lot. The people were gentle, more considerate about where they were walking. Now you have to be alert when you walk.

I’m the third generation here, the senior, and I said to my nephews, my son — prepare and have an education, because when my generation disappears, things are going to be different. You know what they’re doing now with the projects? Before, if you’re my son, you can keep the apartment. Not now. They give you a hard time now for the family. You have to be sick, older. You have to say you’re taking care of someone. If you don’t, you lose your apartment. When my generation disappears, they’re going to fix the building and they’re going to sell the apartments.

Now everybody’s leaving, and I don’t know what’s going to happen in the future. It’s tough. My nephews, they move. They have condos in the Bronx because of the rent. I don’t regret coming here. I worked, I enjoyed, I had my time, and I had a beautiful time but you know, everybody’s leaving now. I don’t know what’s going to happen. A lot of people are moving back to Puerto Rico. How are they going to live here? It’s crazy.

We’ll see what happens in the future. I’m living day by day. I’m going to Puerto Rico now for the winter because I’m retired, and I said to people, don’t come here, why for what? I remember Frank Sinatra, "New York, New York — if I can make it there." That song is no more, that song is not for now. It’s true. I remember the beautiful time when Frank Sinatra sang that song — it was true.

And now, nobody can dance to Spanish music here – they close everything. There is no more flavor. The Alphabet City flavor, the Latin flavor went, left, bye.

Truer words have never been spoken. Thank you Heidi for telling your story and your wisdom.

Love how she said things !

Heidi is spot on. Sad, but true. Enjoy each day as it comes because we don't know the future. I wish her the best.

Heidi, This is your home and heart Enjoy your break and come back

Awkward honesty. The sense of loss and hope live side by side. All part of life.

Never had the words come out so fluidly about the unfair state of this city, and the heinous preferential coddling of transients and tourists and their crass, obnoxious behavior and their mindless money pissing by the gentrification industrial complex of banks, elected officials and developers. She also really nails the affordable housing scam by Mayor De Faustio and engineered by his demonic deputy mayors Shorris, Been (resigned) and Glen, the latter formerly of Goldman Sachs.

Just a hunch, It's money laundering I tell ya

I read your blog because of the witty, intelligent(mostly) comments and sentiments. In the late nineties i was told to go to the east village, i lived in Venice Beach then. I didn't make it then and that is my loss, but this is happening everywhere.
It is as if a dream is dying.

A contrary voice here -- not to her touching memories of the old neighborhood (was she dancing at Carmelita's Reception House at 14th at Third?) but to her view of NYCHA housing ("the projects"). She seems to think its bad that her nephews now own their own condos instead of living in NYCHA housing, and that NYCHA no longer has residents automatically hand down their apartments to the next generation. With hundreds of thousands of people on the waiting list, NYCHA should make sure apartments are going to people who need the subsidy. And whats so great about inter-generational poverty? good for her nephews to be able to afford to buy their own homes.