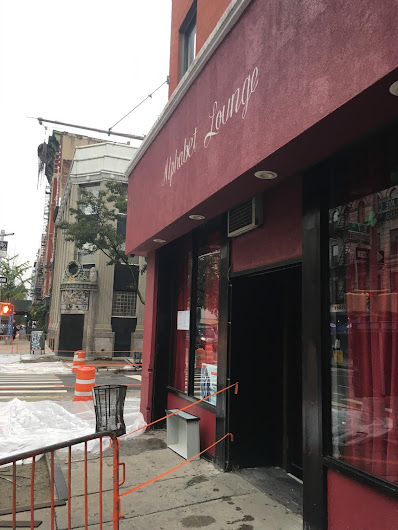 New operators are planning to open a bar in the current Alphabet Lounge space on Avenue C at Seventh Street.

CB3's SLA committee approved the application for a new liquor license during their monthly meeting on Monday night.

In an interesting twist, the main applicant, Jennifer Shorr, used to live in the building at 104 Avenue C. She and her fiance, Brian Powell, are planning to open a neighborhood bar in the space. (This is a sale of assets.)

There was a lot of love for the applicants in the room: Four longtime residents of either No. 104 or a nearby building spoke out on their behalf. The residents talked about what a horror show Alphabet Lounge is, and that an approval here would replace a bad, disruptive business with good operators.

However, committee members said that the applicants needed to better articulate their method of operation, which seemed to be "it will be better than what's there now." Said one committee member: "You are asking us to approve something because you're really nice people." (The PDF of their application is here.)

Powell, who said he has served as a consultant on many bar-restaurant openings in NYC and Southampton, most recently owned Grange, an American bistro in Westwood, N.J. (He said they decided not to renew the lease this summer after six years in business.)

The still-unnamed venture will offer a limited food menu, though Powell emphasized that they will be a bar first and not a restaurant. "We're not trying to hide anything," he said. One of the first orders of business will be to remove Alphabet Lounge's ample sound system. Shorr said that they may have an occasional performance featuring acoustic musicians.

In the end, the committee members signed off on the application.
Posted by Grieve at 4:30 AM

You would think that the residents after living with a horror show bar would not want any liquor license granted. I guess they realize there is no avoiding a license. Is that an "American" Cheese Platter or "American Cheese" platter for $14?

Music to my ears. I live around the corner of 7th and C. I've walked past this place for years in horror during the weekends. What a shit show. I have a lot of disdain for those who reek havoc on that corner. I live a couple of buildings down. Even on the top floor, I can still hear the screaming, vomiting, music and fights. There have been times the noise was so bad, I had to use my air conditioner in the winter to dull out the sounds. Good riddance. I welcome this and can't wait till its all over. Out with the old and in with the new.

This is definitely a good thing. As someone who also lives on the corner, I can't stand the madness on weekends. Too many bros gone bad. What kills me are the many who fail to understand the residents who live here, who have jobs to report to the next day, and who have families. Just because its the east village, it doesn't give those who don't care free reign to be unhinged maniacs. How about some decorum and consideration?

Awesome. When will this happen!

This place was run completely sleazily. Owner never paid for completed work I did and then gave me a big run around so never got paid. Shady 'businessman' all around.

Behavior behind the scenes was, surprisingly, much worse than the coked out bros picking fights with innocent patrons and neighbors out front.