From Joey Ramone to Debbie Harry on the Bowery 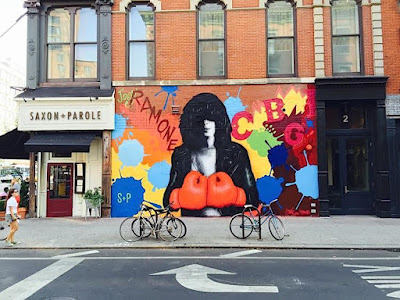 Back on Monday, a crew painted over the two-year-old Joey Ramone/CBGB mural on Bleecker at the Bowery... 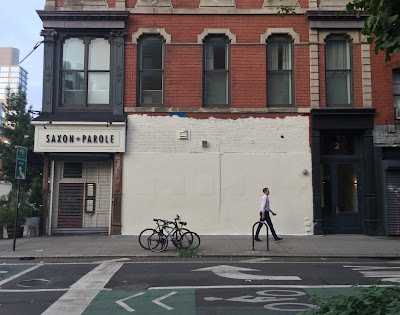 In its place on Tuesday, Shepard Fairey (in connection with The L.I.S.A. Project NYC) created a mural in honor of Debbie Harry and Blondie... 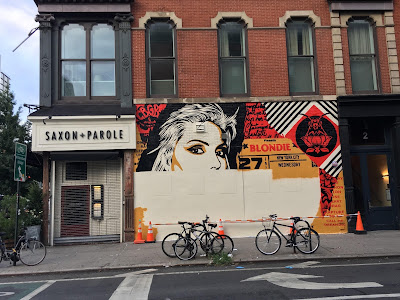 ..which wrapped up on Wednesday afternoon with a visit by Harry and Chris Stein. (Godlis has some photos here.) 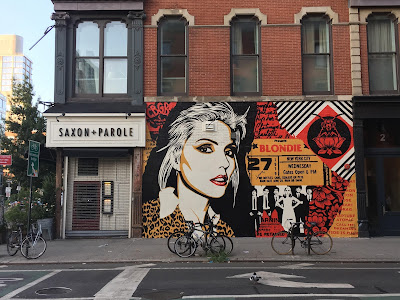 Harry and Fairey previously collaborated on a project for his Obey fashion label coinciding with the 40-year anniversary of Blondie's debut album.

Lola Sáenz notes this morning that, given the placement of the cardboard, it appears Debbie Harry has a new necklace... 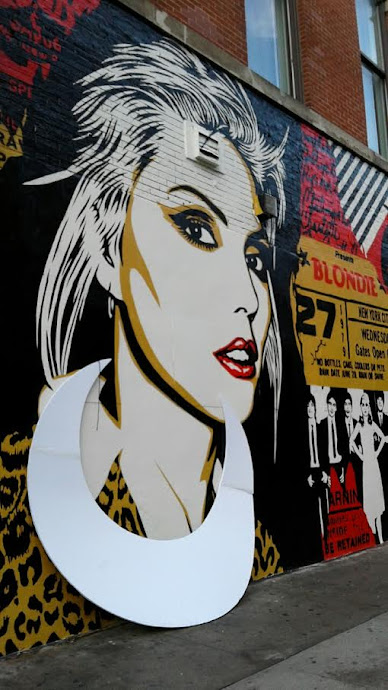 I loved the Ramones and the music which Blondie and other great bands from that ere however I don't see these mural's as homage to an exciting time in NY's downtown music scene but a capitalist's branding of a neighborhood which has be destroyed by gentrification. Trying to bring culture and street credibility to a sanitized strip which now houses condos for the very rich, the displacing of many of our poorest citizens can not be made right with a painted brick wall. I hope these murals get tagged mercilessly however that might just play into the hands of the Bowery's sanitizers.

9:01, i hope you never see the david bowie on this hoboken building you can see from the holland tunnel haha.. pop art is becoming boring, and celebrity pop art for gentrification is definitely cringe inducing. that said the apartment above saxon and parole looks like a peach, a shame you'd hate what u saw friday's and saturday's from the window..

In response to the anonymous post at 9:01 AM, I see your point, though the way that I feel about these murals is that they maintain a presence of history in a neighborhood that's being wiped clean of it. I'd much rather have Joey or Debbie than a multinational fashion advertisement or more bland concrete and glass.

Did anyone remember to get me Debbie's number this time?

Taylor Swift's image should really be there if we want to be honest about what the Bowery is about now. I don't agree with the "preserving history" comment only because Debbie Harry's image is being used to pretend the nab is still cool and edgy. If I were she I would sue the building owner and the artist for using her image.

@1:37pm LOL Taylor Swift would be perfect! Her new single dropped and she sounds deader than the Bowery. She's trying to be all dark and almost Goth but it's like a new store on the Bowery sh s trying too hard and it's just not working. Let's call this mural what it is, a free celebrity endorsement masquerading as local art.

Ugggg !!! Happy for Debbie but come on so sick of the mining for dollars of the punk moment speaks of our current low idea culture pimping so phony, is this done by the same same guy who did the wall on 11th st? if it is that artist really loves Landlords who want to sell sanitized bullshit to the 4000 a month crowd "ever get the feeling you've been cheated" indeed

The real Debbie looks great and so does Chris, amazing how they still resemble and conjure up memories of Parallel Lines.

I don't like the mural for the same reasons mentioned above and also Shepfart's continued pilfering of commie agitprop art that got boring 20 years ago, but it's a little hard to hate this considering how appreciative they look in front of the mural.

On the bright side, the Joey Ramone mural was atrocious and it's good to see it go.

As for Taylor "My Ass" Swift, don't give these corporate REBNY useful idiot artists any ideas.

I approve this message. Atomic.