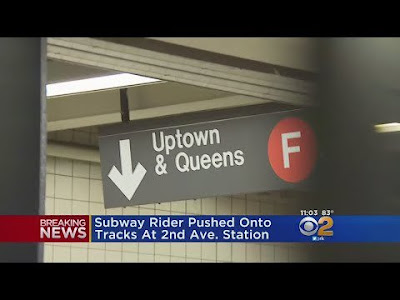 A 49-year-old woman was pushed onto the northbound F train tracks at Second Avenue during an unprovoked attack last night around 9, according to published reports.

There wasn't a train approaching the station at the time. Several people jumped onto the tracks and helped the woman back up to the platform. Police said that she left the station under her own power and was taken to Bellevue, where she is in stable condition with a head injury.

Police described the suspect as a black male in his 20s wearing dark clothing. He remained at large this morning.

Here's a video clip of the NYPD statement via Andy Mai of the Daily News...

The Daily News spoke with the shove victim, Kamala Shrestha, a mother of three, at Bellevue.

He was skinny but strong and he shoved her hard, she said.

“I didn’t want to die. I yelled for someone, and somebody came, two guys,” she explained. They pulled her up, but the man escaped.

"I'm going to push you"? It's now at the point that the scum of this city actually tells their victims what they are going to do to them.

Good thing the train didn't come, but this woman could have been paralyzed or killed if she landed a certain way.

This is something that is always floating in the back of my mind as I see an approaching train, a quick glance is necessary to see who is nearby before I move closer to the platform edge. These attacks as this case shows can come out of nowhere, unprovoked and at the very least will results in some injuries if you are lucky. It makes me feel better when I hear of other's rushing to the victims help.

Hey everyone when you hear a train coming try to stand against the wall furthest away from the train or the middle of the plateform. Make these nut jobs drag you instead of push you, its much harder.

I always stand near a column, and when I hear the train coming in, I put my arm around it and hug it tightly.

My heart goes out to this victim. I hope she will get better. I've lived here for seventeen years. One of the things I do is to always stand up against the wall near the subway platform. I won't go near the train until it stops. Also, when I am in an island where trains either go south or down, I stand in the middle toward a beam. You can never take chances here. I've seen so many people step on the yellow portion when the train comes in. I always think someone could push that person when they aren't aware. A bloody nightmare.

So, let's all take a page from this horrible situation.

I hope they can release a photo or video of the attacker soon and that he is brought to justice.

It's sad that I have to, but I do what Gojira does.

Other cities, and most airports I have been in, have barriers and doors that prevent people from falling on or being pushed onto the tracks. I know the MTA studied this a few years ago after a rash of people being pushed on the tracks. and probably concluded it was too expensive. But the subways are becoming so overcrowded that they at least need to put up some kind of railing system to protect people from the crowds and also from the increasing level of mentally ill people on the streets. I have had to stare down and evade several hostile mentally ill people in the last few days alone. Either there is something in the water or that lunar eclipse is pushing people over the edge. Or maybe it's Trump.

@Giovanni: The MTA says it will take it a zillion years even to fix the signal system, so in what century do you think they'll have the time & money to erect safety barriers at all subway stations?

This is awful. There are so many mentally ill and deranged people amongst us. What is the city doing about it? I feel like this shit only happens here. I don't hear stories such as this anywhere around the world. Why here?

As far as the young woman is concerned, I hope she recovers and receives the help she needs to move forward. She might need a therapist down the line. I certainly would. Talk about traumatic? Poor girl. Wrong place. Wrong time :(

@4:40pm: It happens in other places; you just aren't reading the news in those places. Having said that, it is happening a LOT here in NYC, and that's thanks to an administration that either doesn't know or doesn't care what happens.

I am a life-long resident of this city, but as I get older, and NYC and its streets & subways get insanely overcrowded, AND the city government doesn't seem to care about anyone but the rich cronies who "chip in" to get someone elected, I now question whether I actually want to continue living here. I would have said I could never imagine leaving, but that's not necessarily true any more. I lived here though the "bad years" - the "Ford To City: DROP DEAD" years - but NYC was better THEN than it is now, in terms of not being as crowded, and of people behaving better (yes, even the drug dealers on my block were better mannered than the bros I see staggering around now!).

One of the problems with installing barriers is that different rolling stock have their doors in different places. Standardizing door placement would be a start.

But yes, installing plexiglass barriers would not only improve safety, it would reduce trash on the tracks, and give the option to install air conditioning. Too bad MTA can barely keep itself afloat, let alone make improvements like this.

Yes, good strategy. I always stand far back from edge or hug column.

In order for NYC to march forward into the future the whole subway system will need to be replaced or at least updated.