In recent months, workers have been prepping 321 E. 13th St., a 14-floor building between Second Avenue and First Avenue, for demolition.

Scaffolding is now up at the rear of the building, which housed training physicians and staff of the nearby New York Eye and Ear Infirmary... 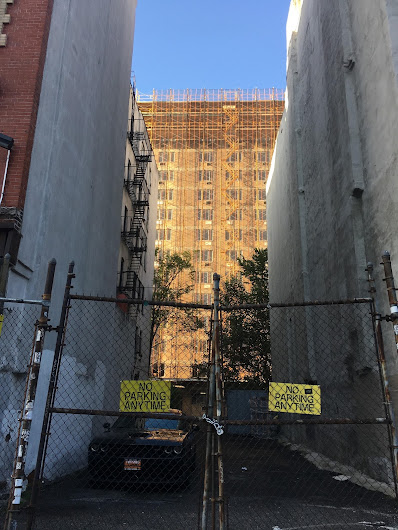 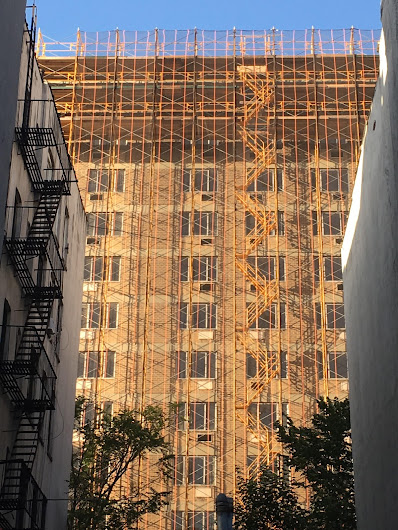 That took about two weeks to erect... and workers are making their way around the building... 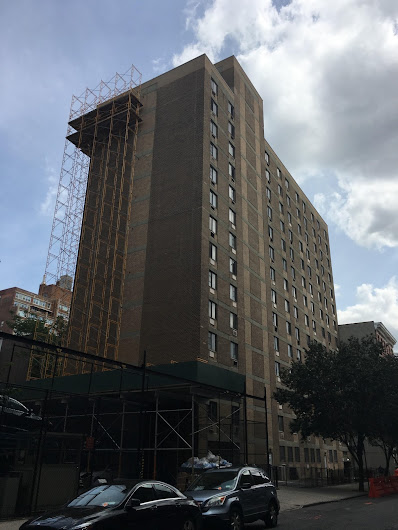 As you know, the Mount Sinai Health System is in the midst of its years-long project to rebuild Mount Sinai Beth Israel, transitioning to a network of smaller facilities throughout lower Manhattan. The plans include an expanded facility on 14th Street and Second Avenue.

The new, 70-bed Mount Sinai Beth Israel Hospital will apparently live where No. 321 stands now and be ready, optimistically, in 2020. This is from a Mount Sinai FAQ page:

Central to the downtown transformation is the new Mount Sinai Downtown Beth Israel inpatient hospital, and a brand new state-of-the-art Emergency Department (ED), located at 14th Street near Second Avenue – just two blocks south of the current MSBI campus. The hospital will feature operating and procedure rooms, lab services and imaging equipment, and will be able to handle general surgeries such as gall bladder, hernia and appendectomies.

The ED will accept ambulances and will be able to handle all of the same emergencies that the current ED handles, including: broken bones, asthma attacks, appendicitis, heart attacks, pneumonia, stroke and all other emergencies. It will also include a pediatric ED. Services at the existing MSBI ED will continue without interruption until the new facility opens, which is expected in about four years.

So far only renderings for the enhanced New York Eye and Ear Infirmary on 14th Street and Second Avenue have been released to the public. 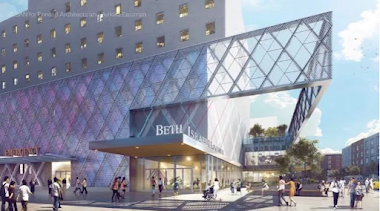 The Vegas-esque makeover of the 14th Street facility is pretty damn awful to my eyes let's hope the building on 13th street is not done by the same architect firm.

So: ambulance sirens 24/7 on 13th Street pulling up to the ER? What did the local residents do to deserve that?

Did anyone even CONSIDER what this does to the quality of life of the existing local tenants on that block?

Ambulances. Police cars. Out patients. Visitors. Rehab-clients. WHO APPROVED THE MOVE? Is this Rosie's farewell present to the EV? She shows up at an immigration, anti Trump rally but says nothing about this horrendous situation that directly affects her district. Term limits didn't come soon enough, Rosie!

“We have to stop hospital closures in this city. People are going to be much sicker in this city if we keep losing hospitals. People are going to lose their jobs. We have to fight it.” - Mayoral candidate Bill deBlahBlahBlahsio speaking in 2013 when he got himself arrested at a protest to keep Long Island College Hospital in Brooklyn from closing, in a publicity stunt during his sagging mayoral campaign. At the same time. he also tweeted "Taking a stand to keep community hospitals in New York City open." Funny, now that he's mayor, that I have not heard a single peep from him about keeping this major hospital, which serves so many of the people he claims to care so deeply about, regarding its closing by Mt. Sinai so they can make obscene money from the sale of the land to luxury developers, while we the people are left holding the (IV drip) bag.

So: ambulance sirens 24/7 on 13th Street pulling up to the ER? What did the local residents do to deserve that?

If they're not paying market rent, there's your answer. (The market-rate tenants can go live in a hotel.)

Did anyone even CONSIDER what this does to the quality of life of the existing local tenants on that block?