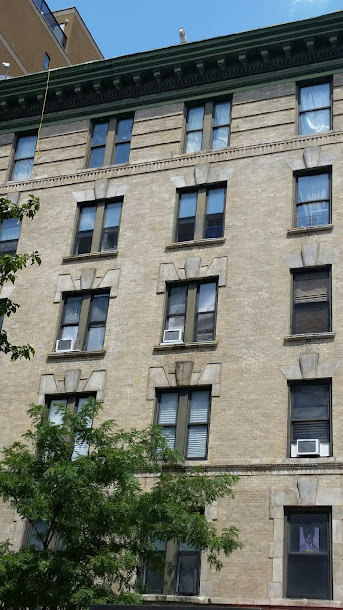 This afternoon, the Confederate and Israeli flags were removed from the windows of the top-floor apartment at 403 E. Eighth St.

As we first reported yesterday, workers hung a tarp from the roof to cover the flags from view on the street below.

It's unknown exactly how long the flags had been in the windows (five months to a year, per different media accounts) in the corner building at Avenue D. However, it wasn't until after last weekend's deadly white supremacist rally in Charlottesville, Va., when people started taking notice. (DNAinfo reported yesterday that a pair of the German Naval flags emblazoned with the iron cross were in the windows for roughly a decade before they were replaced by the Confederate flags some time last year.)

Police have been on the scene since a man threw rocks at the windows on Wednesday morning. There is also an unconfirmed report of an the NYPD arresting a man last night for throwing a rock at the windows.

Previous media accounts reported that both the building's property manager and the NYPD had asked the tenant, a 43-year-old male who has lived here for 12 years, to remove the flags.

Will update when more information becomes available about what transpired here today.

Keen was charged with criminal mischief, given a desk appearance ticket and released.

Police say officers heard the sound of broken glass at a building on East 8th Street near Avenue D.

When they went to investigate, the NYPD says they found a trail of blood leading to the next building and up to Keen's apartment.

Police say Keen admitted to breaking a window and was taken into custody.

He spoke exclusively with NY1 hours earlier and told us he was upset about the flags.


It's still not clear who actually removed the flags. Keen is taking credit for it via an Instragram post (breaking the window gave reason for the police to enter, and they took down the flags). Per an updated DNAinfo post: "An NYPD spokesman denied that police entered the apartment and took the flags down, saying that it was freedom of speech."

Other sources have claimed that the building's management entered the apartment and removed the flags. There hasn't been any report of where the tenant is.

The neighborhood is safe from a burgeoning race riot. It would have been something like the Crown Heights riot from 2 decades ago, which is what the Charlottesville Siege reminded me of, being that the cops were ordered not to do anything.

Good thing our mayor was out of town to avoid this media circus.

Good riddance. This isn't a free speech issue, it's a hate speech issue. The 100 neo-nazis and alt-right bigots who showed up at their dismal rally in Boston today were hiding behind free speech to mask their true intention of setting off a race war and spreading hatred and bigotry. Meanwhile 20,000 peaceful protestors showed up to express unity and opposition to this hatred. Trump is mad that his supporters didn't show up in bigger numbers so he is taking shots at the peaceful protestors on twitter, calling the hem anti-police to try to sow more division and hate. Trump supporters must now decide if they are on the side of unity and tolerance or division and hate. There are only 2 sides in this debate, one is racist, and the other is not. There is no middle ground.

@2:35pm. Have you ever been to Avenue D? There are no dessert strolling zombies there because there are no tourists there, and the only desserts you can get there are Good Humor ice cream bars, shaved ice and Spanish Ices.

Thank goodness. And I hope arguments that the man who displayed the flag has mental issues get rethought: you could say that the man who mowed down antiracist demonstrators in Charlottesville has mental health issues. Clearly he does. But you could also say that Adolph Hitler had mental health issues. At some point we have to draw a line regarding what's acceptable and what is dangerous to society. The time is now.

This is from Darren Keen's instqgram page. He's the guy who broke the window in protest of the racist flags. He claims the police took the flags down. Wow.

darren_keen
Racist Flag update!
We just walked by the apartment. Because of me breaking out the window the police had probable cause to enter apartment and they took down the flags so now they're gone. I just got a ticket for "mischief" which is lower than vandalism. Shit worked out real good IMO.

Those that don't the reality of our freedom of speech need to travel a bit more in their lives as in other countries. Free speech has its limits such as when it becomes a threat to another person or even organization because our freedom from threat and intimidation supersedes you treats of violence. Throwing a rock at a target is illegal now justification of that act makes it "ok".

I would love to hear from the guy who lives in the apartment. Hopefully, he will explain himself.

Hope the DJ enjoys his 10 seconds of fame

Free speech for all


What happened to it?

So the flags were taken down, the symbols are gone but the hate is sadly still there.

from the press reports and his instragram, the guy who broke the window seems like he might suffering from some sort of self-congratulatory mental issues himself. and "i moved here from nebraska so i don't have to look at this?...." really? oy

It would seem like the misanthrope flag tenant does have a mental problem and a semblance of a conscience, being that he compromised and removed them and went into hiding when neighbors reacted and the media circus showed up.

It sure is interesting that nobody complained or cared before (I remember looking up and seeing these flags riding by one afternoon in July). Especially the local and national news media, who don't even show up when thousands were being displaced because of gentrification being induced by unscrupulous banks lending to scummmy slumlords.

Except he does have a history of mental illness and has harassed his neighbors for years. He does need, and deserve help, but he has to go for it or be deemed a threat to himself or others.

Is anyone else concerned about the recent trend to punch or attack people with different viewpoints? I have close family members that died fighting Nazis and the holocaust. Just afraid that if we will be closer to the Nazi party if we start destroying free speech.

Note to 11:27 a.m.: While you saw the flags in July as you were biking and assume no one cared about this or complained before now, neighbors have been complaining about the flags and him way before people like you and the media caught on. People have been on it. The media attention is appreciated because it helped get something done. That's the power of the media. And next time you see something like this, don't just whiz by on your bike. Take action. Spread the word. Do something about it. I am proud of my neighbors who took action once they heard what was happening. I fear we haven't heard the end of this. My hope is he will be evicted.

There was a statute of Lenin on a building three blocks away for decades, and people are hysterical about a confederate flag? Where is the Dukes of Hazzard when you need them.

"There was a statute of Lenin on a building three blocks away for decades, and people are hysterical about a confederate flag? Where is the Dukes of Hazzard when you need them."

Because the meat golems only get upset when they're told to get upset. I can walk down the street with a Che or CCCP shirt and no one would do a double take. Why? A few years back the Empire State building honored the anniversary of Mao's cultural revolution by lighting up red and yellow. So, you see, it's not about "hate" or "racism" or "evil" per se; it's about who's doing the hating and who's the subject of that hate.

"Is anyone else concerned about the recent trend to punch or attack people with different viewpoints? I have close family members that died fighting Nazis and the holocaust. Just afraid that if we will be closer to the Nazi party if we start destroying free speech."

The people least concerned with this are the ones throwing the punches and the rocks, so good luck getting them to listen to you. And everyone else will just wait around until they're the ones getting punched and maybe not even then will they get the picture.

You heard it above: hate speech is not free speech. What's hate speech? Whatever I say it is, apparently.

But what about whatabout? said...

I just love all the concern-trolling about the Lenin statue and other things that have no relevance to the issue at hand. Whenever anyone engages in this tactic known as whataboutism, they are trying to distract you. But it's like a Jedi mind trick: it only works on the weak-minded.

I don't have a social media account, and I whizzed by because I was working.I don't know how I am complicit because I didn't report it at the time, I only assumed that the people in the area probably reported it and obviously nothing was done. Well thanks to the blood and soil idiots and the stupid president, the people got what they wanted.

There's also the first and fourth amendment issues that I considered at the time also.