Flashback: A mural for Princess Diana on Houston and Avenue B

As you likely know, today marks the 20th anniversary of the death of Diana, Princess of Wales.

Shortly after her death in the Paris car crash, LES-based artist Chico created a mural in her honor on Houston at Avenue B (6 E. Houston St.) ... 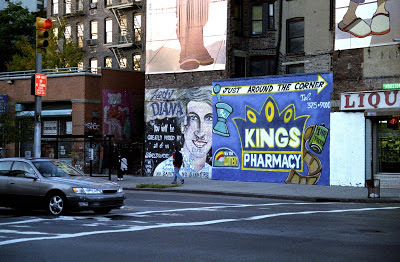 Someone wasn't a big fan of the Royal Family....hence the "die" mustache ... 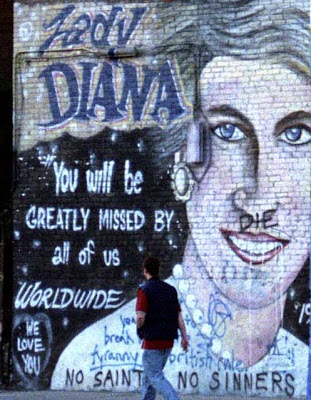 But do you remember the Chico mural with both Di and Mother Teresa, and the caption: "In memory of beauty and holiness"?

@Scuba Diva I remember that mural. Luckily photographer David Corio has it posted right here. I still remember the night that Princess Di was killed, having dinner at Layla in TriBeCa, and everyone was in shock as their belly dancer performed. I can also almost remember a time when most people's role models were humanitarians and not reality stars, celebrity chefs, and overpaid athletes. Almost.

The Mural Chico painted on Houston street was this one: http://4.bp.blogspot.com/-ZdAXKh9AhGA/UFrPQnBb8VI/AAAAAAAAAus/OI2xipBUv7c/s1600/BlogNew+York.+Mural.+Graffiti.+Lower+eastsd.Diana+1997.tif

I meant Andre Charles ! Next to Chico's Mike Tyson and Joe Camel...
www.nyc90s.com

Yes, I do. On 14th and A. I remember my mother lighting a candle for D and leaving it at the foot of the mural. Chico's work. I was never able to find a photograph of it !

Yep, I remember. Also remember the Pakistani deli on Second Avenue, next to Little Poland, that for a while had a lurid pink and purple "Diana & Dodi" awning - never quite understood that one!

@Giovanni I remember Layla - wasn't that one of Drew Nieporent's restaurants? Was on W. Broadway. That brings back memories.

Ah, memories of KINGS Pharmacy. I loved that place. Sigh.

This is such a cool piece of history! Thank you for sharing! Too bad this building isn't an equally cool piece of history. Every time I walk by I feel like it gets worse and closer to falling over. I can't believe the city hasn't done something about it (or the few other buildings in a few block radius that are totally abandoned and falling apart).

Yes. I remember. I was working in a nightclub in the Times Square area. We kept hearing about it through updates at the front desk. Our manager was either continually on the phone with someone or had a radio. Sadly, it's a constant reminder to me that life isn't fair. How many good things did she try to do for others and yet she was denied seeing her sons grow up. It makes me cry every time. August 31rst is also my birthday so I can't really forget the day. Side Note: Kings Pharmacy in the mural- they were forced out by Duane Reade around 2001. I knew those guys and they fought so hard to stay. It was the begining of the end.