More about the church vs. the travelers on Cooper Square 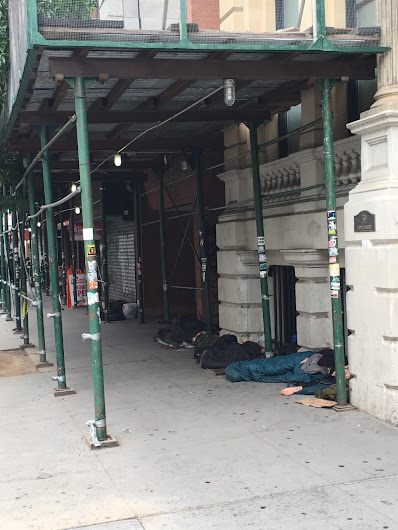 [Photo on Cooper Square at Seventh Street from June]

Last month, we noted that the travelers who slept outside the First Ukrainian Assembly of God on Cooper Square at Seventh Street had been driven away after someone from the building sprinkled bleach powder on the sidewalk.

Later, someone dumped garbage at the spot (including used toilet paper) and tagged the building.

The Post has a follow-up on this today with a piece titled "Vagrants are going to war against an East Village pastor." The paper talks with the church's leaders, Irina and Ivan Belets.

Alarmed by a growing daily gathering of junkies and hobos, the Belets took matters into their own hands July 22 by sprinkling Comet bleach powder all over the sidewalk in front of the church...

The cleanser fended off the unwelcome interlopers for just a day. “They retaliated and spray-painted all kinds of profanity like ‘f–k you’ on the walls,” Irina said. “They also dumped garbage all over the powder and left a garbage bag filled with used toilet paper.”

The vagrants urinated on the church steps — forcing the Belets to scrub them every day for months in a futile effort to get rid of the “unbearable” stench, Irina said.

Some members of their flock began to skip their weekly Sunday service because of the putrid smells.

And the city reportedly won't do anything about it...

The Belets say they have complained to the city constantly to no avail. They say they have filed at least five complaints through the 311 hotline, and the NYPD confirmed it has received at least 14 calls to 911 this year for the church address, including five reports of disorderly persons...

For now, Irina Belet said the powder has kept the travelers at bay, but she believes they will return. "We need real help. We need the city to do something." 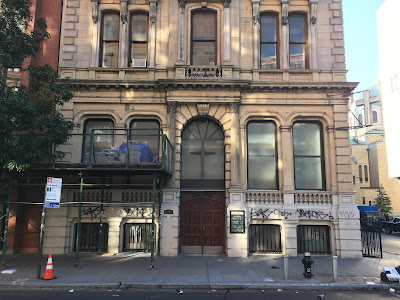 An EVG reader just said that this is a cover story... 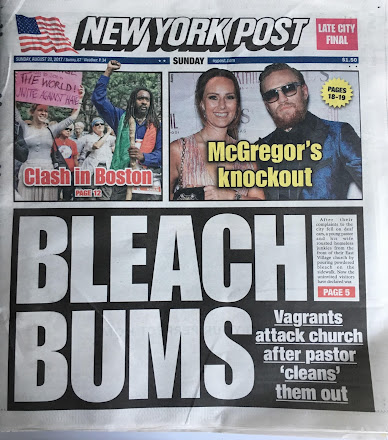 Was it bleach powder? I was walking to work Friday morning when I saw someone pouring liquid bleach onto the sidewalk. I suggested to him that he use the original Lysol (the red stuff). Nothing works better.

De Blasio is decrimalizing (or at least mitigating the consequences ) of most of these disgusting behaviors...so the church can't complain anymore; the mayor says so don'tcha know.

This is an issue that should beposed to each of the candidates for City Council. I'd like to see in writing what each of them says. There is so much discussion of quality of life issues on EV Grieve, increasing number of bars, noise complaints, and these transients that it would be good to hear from the candidates.

Why do u call them travelers? The are called Crusties.

They haven't gone far. Yesterday I saw a group of Crustys with their pit bulls setting up camp across the street in the nice new Cooper Triangle. It won't be nice and new for long if they stay in there.

Anonymous 10:30 it is your City Council office along with folks on your Commnity board such as Susan Stetzer who have reprogrammed Tompkins Square park and Ave A as the new Skid Row. They have consistently pushed back on the Precinct and Parks Dept when they tried to remove vagrancy from the park and in front of local business and residences.

These "crusties" are in reality "poseurs". If they want to drop out of society and be solely independent or anarchists as they claim, they can live in the woods in Rhode Island or Kentucky like that moron who killed himself eating poison plants in that film "into the wild" instead of coming to a metropolis like NY and shitting on people that usually help the indigent and unfortunate that they feign to be.

The cops were asked about the issue of the crusties setting up homes on the sidewalk by residents on Second Avenue and they said the crusties know their rights and there isn't muschbthe police can do. The city's politicians need to create some laws that will give the cops the ability to stop these kids from setting up camp and harassing people. So we need to all tell our elected officials something has to be done.

We are at a point where these Crusties/Travelers/Homeless people have become a major problem. It seems that not only their numbers have increased but their behavior has gotten out of control. In that area of 3rd Ave their presence has closed MacD's and now they are infecting the Church. Why? Maybe Mayor Bill's hands off policy - no stop and frisk and no broken windows - is ultimately no help to the EV. And there will be no relief as long as he is mayor and there is one party rule. The mayor and city council have failed us miserably. DON'T VALIDATE THESE SELFISH POLITICIANS. Don't vote in the primaries. And vote against them in the general election!

Has the church thought of removing the sheltering scaffold and return it in the fall? Becareful what some of you wish for in regards to laws giving the police the ability to use force to remove people camping out on the street. This is an open invitation to incidents of excessive force. I got rid of a guy that slept in front of my building for a few nights, each morning he would leave his make shift bed, uneaten food, and wads of chewing tobacco he would spit on my walls. I told him he could sleep there but had to clean up each day. On the third day he called f*gg*t and a string of other insults. I called 911 in front of him and told the operator he was using threading language. He knew I would get a police response in minutes which is what happened, he took immediately and never returned. As he left those he gave me one more fuck you and his bedding to dispose of.

I've walked past this corner for years. Some time ago, I saw a guy defecate there. Others just walked by and said nothing. The epidemic of homelessness is rising. Its disconcerting to say the least. I wish our pathetic excuse of a mayor would do more to mitigate this crisis. Yet, he seems impervious to so many of us, which is sad, given he spent much time and money clamoring for support and votes during his election year, with the hope of being a humanitarian. He is anything but. DeBlasio is a star fucker who only cares about his own success and rise to fame and power. If he truly cared, something would have happened. If the mayor doesn't care about the homeless in our city, who will???

Has anyone contacted any of the news stations with a tip so that they can do an exposé on this issue, especially since it was reported to 311 and nothing has been done? Perhaps Marcia Kramer can bring this up to DeBlasio at the next press conference or Lew Leone the VP/GM of Fox 5 News, can investigate)!

That church is more decent toward those crusties than I'd be. If I were there, they'd be getting water balloons dropped on them regularly, or maybe accidentally sprayed with something like Lysol to neutralize the aroma.

"We are at a point where these Crusties/Travelers/Homeless people have become a major problem."

Are you drunk? A major problem? Major? No, a major problem would be no water for three days or not having electricity for a week. A bunch of curb monkeys, while they may be a nuisance, are not a major problem.

I got a great idea though. Next time you see a Crustie camp, just plant a Confederate flag on them and the mob will show up and stone them within 10 seconds. As Buckminster Fuller said, "Don't fight forces, use them!"

I agree. The Crusties are the least of our problems down here. They are, thankfully, seasonal, and will be gone by October. The other problems, not so.

So dont play into this. Focus on the real problems down here!

it's bullshit that the city doesn't do anything. how long do you think these scumbags would last if they camped out and got high on the sidewalk in front of st. patrick's cathedral, or radio city, or a soul cycle, or a nike store? i'd say they'd be gone in less than 24 hours.

Sounds to me like the city doesn't care because it's a small congregation, so only a few votes are on the line. Anyone doubt it would be very different if this was happening at St. George's or a synagogue? It's shameful.

How quickly do you think the issue would be handled if the travelers were to be in front of Gracie Mansion or the YMCA in Park Slope?

MEETING TONIGHT:
The Villager is sponsoring a debate between the five Democratic candidates running for City Council in the Second District — which includes the East Village and stretches up to the low E. 30s — at Theater for the New City on Mon., Aug. 21, from 6 p.m. to 8 p.m. The event will be in the theater’s largest performance space, so no one will be turned away. The latter part of the debate will feature a Q&A with audience members. The Council seat is opening up for the first time in 12 years. Come hear the candidates vying to be the next councilmember as they talk about the district’s pressing issues and their ideas and positions, as they each make the case why she or he would be the best person to lead the community.

Last I've checked vagrancy was iligal but aperantly not under DiBlasio's administration. I've never seen so many penhandlers in this neighborhood. This is a case for eextreme gentrification that's happening in EV these days.

Removing the scaffolding if it is no longer needed would be a good start.

Remove that and there's no more shelter from rain, and they'll move on.

Re 3:57 That is a more user Friendly term Well Done