Report: The Village Voice is ending its print edition 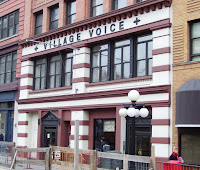 After more than 60 years, The Village Voice is ending its print edition.

Said publisher Peter Barbey, who bought the weekly in 2015, via The Hollywood Reporter:

"For more than 60 years, The Village Voice brand has played an outsized role in American journalism, politics, and culture," Barbey said in a prepared statement. "It has been a beacon for progress and a literal voice for thousands of people whose identities, opinions, and ideas might otherwise have been unheard. I expect it to continue to be that and much, much more.”

The paper left Cooper Square, its home since 1991, in 2013 for a move to Maiden Lane in the Financial District.

The Village Voice is ending its weekly print edition. End of a journalism era in New York City.

Here's more via Poynter, which called the announcement "a symbolic blow for alternative weeklies across the United States, which have endured successive cuts and closures in recent years as print advertising revenue has dried up."

Here are thoughts via the Columbia Journalism Review.
Posted by Grieve at 1:00 PM

I grew up in Westchester. Used to come down to the city when I was in high school (late 80s) and pick up the Voice, look at the band/club listings and go see bands based on how cool the band name was. found so many cool bars and bands that way. just changing times i guess

i got my apt. from an ad in the back page of the voice. i will miss the voice.

Every Wednesday I would pick up the Voice and head to a favorite diner or Indian restaurant to read the latest Wayne Barrett column on the reign of Ed Koch or Rudy Giuliani, and the great Robert Christgau Pazz & Jopp music columns, the brilliant Nat Hentoff, all the snarky movie reviews, and later the entertaining gossip of Michael Musto. Before there was an Internet and smartphones, the Voice had all the culture content I needed in one neat package. Even the classifieds made for good reading, and the crazy notices on the back page by people looking for some random stranger they had fallen in love with on the subway. Thank you Village Voice, you were a great dinner companion.

Oh no! Heavy sigh. I got my first apartment in New York from the Voice. Not my current one -- that one was word of mouth. I hate having to go online for everything these days. Thank god books still exist. RIP, Print Voice!

i grew up in the south in the 80s and 90s, mercifully next to a large university. every saturday from about age 12 to 15 i'd bike over to the university's library and spend a few hours leafing through last week's village voice, mesmerized by the club listings and the dirty ads in the back. by the time i finally moved here to nyc, i felt like i already knew the place intimately.

Nice recollections Giovanni. I recall when people would line up at the Astor Place newsstand to get an early jump on the next week's classifieds. It was a dollar (?) well spent back then.

the times they are a-changin'

March 14, 1985 arrived from Florida, got the Voice. First number called in the morning was where I worked five years.

Is the end of the paper edition typically a harbinger for an entire publication closing down, or will print cost savings better help them stay afloat? I haven't read a paper newspaper of any substance in forever. Paper is gross, unwieldy and inconvenient. I still like a good shiny magazine though.

I remember lining up at the Cooper Square office building on Tuesdays or Wednesdays to get free advance screening movie passes.

I also traded and bartered stuff in the Village Voice Bulletin Board.

I think this may also have to do with their effort of eliminating its Union.

Love it or hate it the Village Voice had no equals. I got my sister a great rent stabilized apartment in the late 90's from their website. The paper with apartment listing hit the stands on Weds mornings but the online listing were on their website after 5PM on Tuesday.

The end of the print edition is most definitely union-busting by their anti-union owner, therefore boycott this Village Voice in name only.

I remember when they first went free—thanks to Karen Durbin. My [now-deceased] roommate worked in production at the VOICE for over 25 years before he retired.

It is truly the end of an era; a few years from now, I'll be saying, "You remember the Village VOICE?" and be met with a blank stare.

Moved to NYC in 93 not knowing anyone, answered a VV Fire Island share ad and made friends for a lifetime. Thanks Village Voice, your street presence will be missed.

Surprised nobody blamed Trump. I thought anything bad that happened at any point in human history was his fault.

I wish I could feel that "this one hurts." The VV that I knew, when I first moved to the East Village in 1965 long ago stopped being the newspaper I'd wait for at the Astor Place newsstand on the way back to my apartment on Lafayette Street.My memories, of reading and re-reading the articles of Jill Johnson, Nat Hentoff, Wayne Barett, Robert Christgau, and Michael Feingold will always mark who I became as a thinker. But in the last two decades, the VV became less important to me, as the quality of its journalism declined (most of the articles needed good old-fashioned line-editing). Then, too, there was the revolution in media consumption that developed with the Internet. Sad to lose an old friend.

I first bought the Voice at my local newsstand and it opened up a new world and instilled in me a new awareness. The articles of Wayne Barret and his coverage of civics and city hall at the end of Koch and during the overrated reign of Giuliani, especially with the actions and immorality of our current mayor and Nat Hentoff on his weekly first amendment lessons and with what's going with the attention these statues and this idiotic panel said mayor has assembled, still rings with relevance today. I also enjoyed the movie and music reviews and the early comics of Matt Groening's Life In Hell, which made looking forward to The Simpsons back in 89 a thrilling moment, and the photos of Slyvia Plachy.


I thought when it went free in the 90's, while convenient, was a mistake. And of course with the internet, it got smaller and smaller. Although it's ending it's paper edition, there was no doubt it's demise was inevitable. I will make it a duty to link to their website, which is solid, but it's possible that it even might not last because it's joining one of a million digital news publications. This is truly a tragedy.