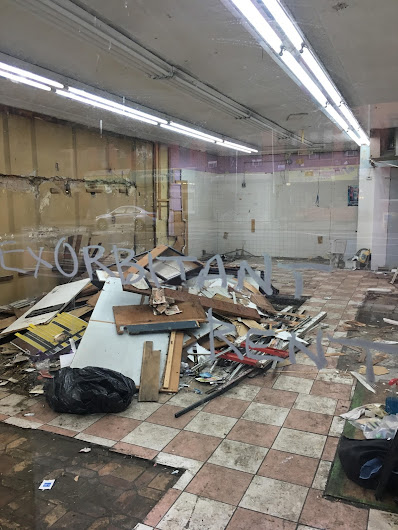 [At the former Golden Market on 1st Avenue at 7th Street]

City Hall reported 70 pedestrians and cyclists killed by city motorists through July, and 8,074 injured, compared to 80 deaths and 8,502 injuries in the first seven months of 2016. (Streetsblog)

Invasion of the outlet malls in NYC? (Gothamist)

"City Hall reported 70 pedestrians and cyclists killed by city motorists through July, and 8,074 injured, compared to 80 deaths and 8,502 injuries in the first seven months of 2016."

We recently lost one of our own to death-by-car. Eddy, who hung out in Tompkins and rode his bike everywhere, passed away last week.

The "killed by city motorists" numbers, how do they compare to the murder numbers for that period? Has NYC become the most dangerous city in the USA to walk or ride???

I was sorry to hear about Eddy. I was waiting on more information for a post.

Fuck; I saw a sign about Eddy, but it was spelled "Eddie."

I had just met him; he fixed my window. It's not fair.

I think it's high time deBlahBlahBlahsoso got off his duff and banned murderers once and for.

Rip Eddy. Was a kind soul. My dogs loved him and he loved tgem