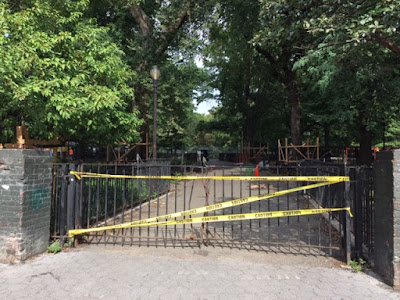 Workers arrived this morning to start renovations on the Tompkins Square Park Avenue B children’s playgrounds. 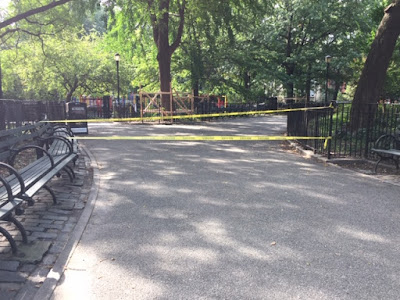 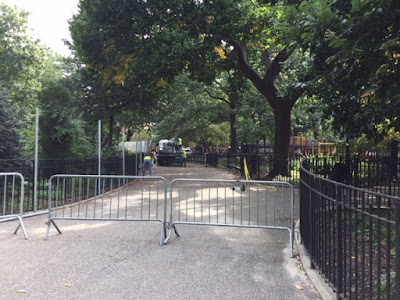 Per Greg: Contractors are installing fences cutting off access to the paths in the area, such as the entrance at Avenue B and Seventh Street, as well as the path around the Don Robert's Garden.

The contract is for one year, a worker on the scene told Greg, but the job could be completed earlier.

According to the Parks Department website: "This project will reconstruct two playgrounds with new play equipment, safety surfacing, spray showers, seating and fencing. 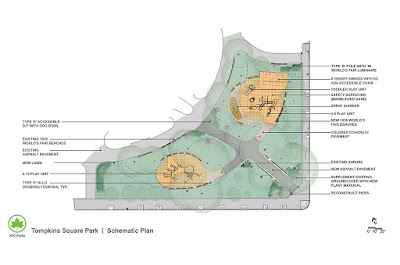 The Parks Department was to supplement the funding with its Parks Without Borders initiative that would lower the fences from its present height of 7 feet to 4 feet, a move that stirred plenty of concern.

Parks Department Commissioner Mitchell Silver was reportedly going to make the final determination on the fence lowering. That was in March 2017. We'll try to find out what the final verdict was on the fence's height.

In an email, a Parks official said that the new fence height will be 4 feet.

Oh joy; they're apparently also cutting off access at 8th street and avenue B again; I love taking the scenic route to get home, particularly late in the evening.

These look like the same spots from those large puddle photos you posted a week ago.

The fencing-off of this area is ridiculous. 2.5 exits are now closed. Does construction really require that much space? I hope they scale it back so at least the 7th St exit is fully accessible.

Also, the hawk nest tree has been fenced off. I hope construction doesn't interfere with their nesting. Isn't that illegal to mess with them anyway?

Does anyone know whether all existing tress will remain? I'm concerned that a lot of trees haven't been boxed - makes me wonder if they're slated for removal.