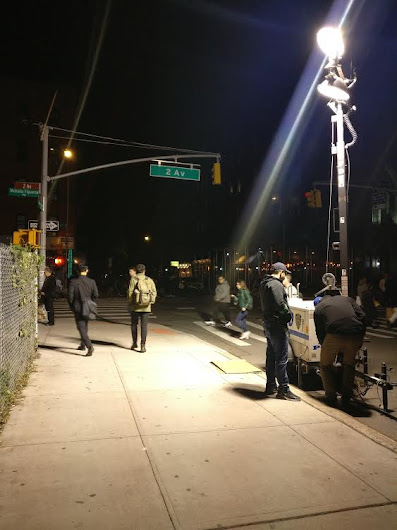 There have been several published reports (here and here) in recent weeks about the growing number of increasingly unruly travelers/crusties gathering on the northwest corner of Seventh Street and Second Avenue.

This past weekend, New York Post reporter Dean Balsamini wrote that he was allegedly punched by a traveler named Zeke, who apparently had a "farm-animal musk" and "Charles Manson eyes," per the article.

In response to these reports and a growing number of complaints from nearby residents and merchants, the NYPD last night set up a light tower on the corner, illuminating the sidewalk and empty lot — site of the deadly gas explosion in March 2015 — to deter anyone from congregating and camping out (apparently in keeping with the mayor's Omnipresence policing strategy). 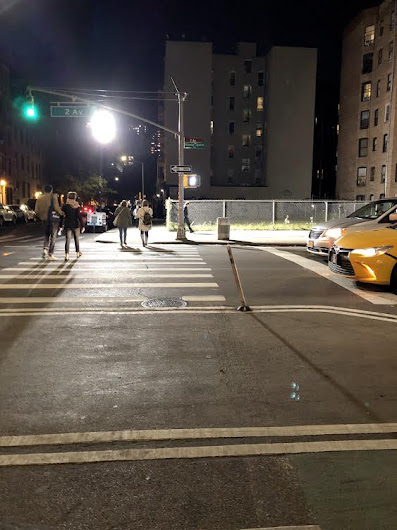 In an email to local elected officials this past week, one nearby resident wrote: "It's terrifying to come and go day or night! They own the street and it's getting worse. These are drifters, not homeless to be pitied. Help before someone is murdered."

Another EVG reader worries that the corner can only get worse. Luxury condominiums are slated for part of the lot on Second Avenue and Seventh Street. The eventual arrival of a sidewalk bridge would only provide more cover for the travelers, who like this spot with its proximity to a LinkNYC kiosk and its free Wifi and charging station, according to the reader.

Back in July 2015, following published reports citing a perceived influx of homeless people and drug users in Tompkins Square Park, the NYPD installed a patrol tower in the middle of the park. The NYPD removed it after a week. (We did get the tweet tower out of all that.)

NYPD installs patrol tower in the middle of Tompkins Square Park (149 comments)
Posted by Grieve at 4:31 AM

Remove the charging wifi kiosk from this block. In fact, remove them from everywhere. Anyone who's anyone knows where to get power and wifi and doesn't need a kiosk.

Good. Now start arresting the crusty assholes or otherwise figure out a way to drive them away permanently.

@8:35 Totally agree, I have never seen anyone other than a crustie using these things. Get rid!

Luxury housing is always the answer to any problem.

@10:01am Cuomo, Hochul, Gillibrand, and James will handily win statewide this November, the district reps (U.S. House, state assembly and senate) locally, the mayor won reelection last November, and the city council elections were last November, so I doubt this lamp was installed to enhance their chances of winning reelection this November.

How many Crusties does it take to get the NYPD to install a light tower in the East Village ? Coming soon to this location a new high end housing project that will keep those nasty Crusties off the block.

If you are anti development, then expect to have these crusties. Luxury rental and condo buildings will eliminate these nomads

These are driters not homeless. Every year since the rich took over the neighborhood I have seen similar hysterical comments and stories like this about the Crusties. If one follows the news you will find similar stories and quotes especially in San Francisco, LA and other major cities. In these stories the difference is they are talking about thousands of people not 7-10 "drifters". Next year we will see the same story and comments about a very small number of people. On another note I have to say that if someone punched a NY Post Giuliani Trump loving newspaper reporter and we all know they are just as obnoxious and aggressive as the Crusties in the face and they only had minor injuries people would be lining up to buy that person a drink. Gentrification and rich people keep on coming and one day those people making thses comments will be "drifters" themselves.

Question: How many Crusties who do not have a trust fund does it take to screw in a light bulb?

Answer: Both of them.

While I can sympathize with those who may have had negative encounters with homeless persons and "travelers" who live on the street, the majority of us who have lived on the LES for the past four decades have had NO problems with them.

The travelers and homeless (they ARE human, just like the rest of us!) I have met and interacted with (try discovering the commonality we all share, why dontcha?) are mostly good decent people who are living their lives in THEIR way.

Some might not like their unsightliness or their dogs or their body odor, but, like it or not, they have as much right as the rest of us to be here. It would be nice if we lived in a community that did not have such a disparity between poverty and ultra-wealth.

As our community as we have known it is being wiped out with displaced long-term residents and locally-owned businesses forced out of business as classic buildings are being replaced by ugly-as-fuck "luxury" closet-sized housing for monied transients who don't give a flying fuck about our neighborhood, are "travelers" and the homeless REALLY the problem? Mis-directed anger and "divide and conquer" strategies are NOT going to help us save our community in ANY way.

Those who sic cops on others who are less appealing to them ought to think twice, lest they find themselves on the street as rent protections are diminished while hyper-gentrification expands to every corner of our city.

I have to say I saw one of the crustie's (crusty's?) dog's attack a small pooch , killing it with ZERO remorse per the crusty. He was high out of his mind and could care less this poor woman was DEVASTATED and her dog was dead. I see what you're saying, of course they're human and should be treated with dignity HOWEVER- when they are high as fucking kites on heroin and don't watch our for other people or animals or take care of their own animals- they have to fucking go. GTFO.

Thank you Chris Flash for making such an insightful and humane comment on this thread. I hope others who have commented in this and in the other media on this story and those who commented above read and think about what you said.

Yep Shazziz covers a number of the many issues of the crusties. Numerous dogs get killed by their dogs every hear, they threaten people regularly, they crowd sidewalks, they regularly decrease the quality of life of people who pay for the place the live, and, oh, by the way, they don't have a right to use the sidewalk as their public living and harassment quarters.

Shazziz while your dog attack story is sad the majority of serious violent crimes, drug use and drug sales are done in the neighborhood by people who have apartments.By your logic which says all are to blaim for what one person does then why not say that everyone who has a home in the neighborhood should take the blaim for the crimes against people , not dogs . that I cited above.

I don't like these poseur drifters, but you're right on about what the real scourge is and it's this moron frivolous spending and arrogant tourist market demo. All these new "affordable luxury" apartments are just bland anti-septic versions of SRO's designed for transients. I think it's designed to ensure that a community and also a constituency will not exist like they would in regular apt. buildings.

Stop pointing at things and say you love them

However, the Google maps, telephone calls, and digital billboards are legitmate & useful functions, and those functions should remain.

@Eden Bee: That’s not a lamp, it’s a Trustafarian Chandelier™️

One day soon they will build a gate around Manhattan, with doormen posted at various points around the island.

Haha I still haven't seen it lit up yet. It's like the lighting of the tree in Tompkins event but every day and no free cocoa.

Hey Hey Ho Ho East Village and LES Hipstafarians have got to go. Your rich parents miss you.

mrnickcooper - its called congestion pricing and Cuomo wants it bad. everyone entering the city will have to pay, they'll track you using your cell phone and if for some reason you are a full human who doesn't carry a surveillable phone they'll use facial recognition to toll you.

How many calls do NYU students and rich kids, whose mommies and daddies are paying $2,000 and up a month for them to live in the East Village, have to make to 911 to get the NYPD to put a light pole on their block because they don't like Crusties sleeping there ?

The crustafarians are homeless by choice, not necessity. This past summer, the mom of one of them drove in from Jersey at least once a week to give her crusty money, food, whatever. They are NOT decent people. Decent people don't harass and threaten others, while driving away customers from local businesses

@2:53 PM and Chris Flash, your humanitarian instincts are noble, but misplaced in this instance. This IS NOT a case of student/sgentrifiers vs. free spirit adventurers. I've called 911 several times to remove crusties, and I AM NOT a newbie the block. I'm a non-celebrity but working actor, and have lived here more than 40 years. I was told by authorities that I was the first to call and report the explosion in 2015. I frantically searched the rubble, hoping to help any injured neighbors or passerby. My hood bona fides are rock-solid. I have video shot from my window showing crusties screaming and playing "music" at 2:00 AM.I can show them talking to cops in a way that would get most people arrested, or worse. I have images of them pissing on the sidewalk, have confronted a dirtbag screaming curses at my wife, and cleaned up the filth they leave behind, before the building I pay rent to is hit with another $400 fine for THEIR litter. Crusties assaulted the Security guard at "Stomp", and punched a clerk at the convenience store because they thought the beer was over-priced. They are a dangerous, nasty, drunken menace, and I refuse to cower behind curtains like frightened town-folk in a western movie, while marauders terrorize the citizenry.Fuck that. I hope they are gone for good.

Your shade throwing was uncalled for and dumb (like most shade throwing), but your Manhattan doorman theory is very good. Certainly, REBNY will steal that and send their lobbyists to city hall (or text the mayor on his blackberry while he's doing yoga in Park Slope) to propose that.