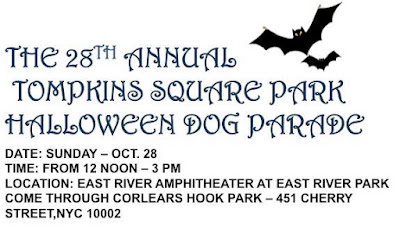 The resurrected Tompkins Square Halloween Dog Parade — No. 28! — happens Sunday from noon to 3 p.m. in its new location, the East River Park bandshell.

A little background if you're confused: In August, organizers were forced to cancel the event after the Parks Department required parade organizers to take out a big $1 million insurance policy to cover the larger crowds that have attended in recent years.

That wasn't going to happen. So no dog parade.

On Oct. 17, City Councilmember Carlina Rivera's office announced that a deal had been worked out with the dog-run supporters and the folks at Good Old Lower East Side (GOLES), who will hold the insurance policy.

The parade also moved to the bandshell to accommodate larger crowds. (Plus, there's an actual stage.)

Meanwhile, here a few photos of the bandshell that I took late Wednesday afternoon... 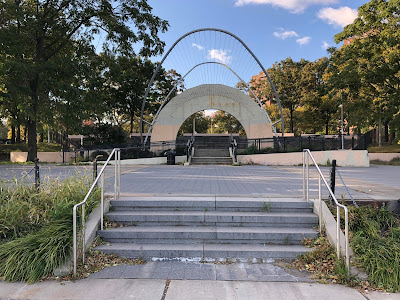 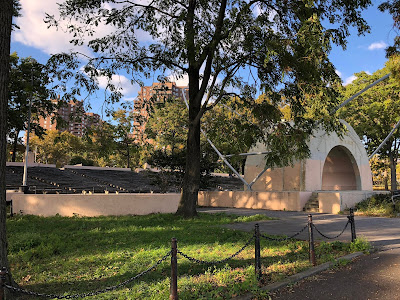 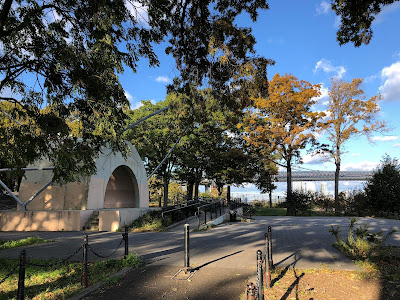 And some history of the bandshell (or amphitheater!) via the Parks Department website:

In 1941, an amphitheater was built in the park, along with an adjacent limestone recreational building, as part of an urban renewal project for the Lower East Side. During the 1950s, the amphitheater was the site of frequent free Evening-in-the-Park concerts. Joseph Papp (1921-1991), founder of Shakespeare in the Park and the Public Theater, staged Julius Caesar there in 1956. Local schools held their graduation ceremonies there, and the Group of Ancient Drama staged free-of-charge performances of classic Greek plays. In 1973 however, the amphitheater closed due to budget cuts. Vandals attacked the neglected theater and by 1980 it was unusable.

The bandshell reopened in late 2001 — with the help of Erin Brockovich.

And allow EV Bendy Arrow to show you where it is... 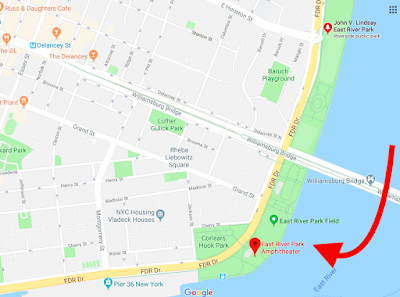 Or you could just watch it on ESPN with Katie Nolan.

Previously on EV Grieve:
The Halloween Dog Parade in Tompkins Square Park this fall has been cancelled

Tompkins Square Halloween Dog Parade is back on; new deal puts the pups in East River Park and on ESPN this Oct. 28

I remember when there was a large concrete bandshell in Thompkins Square Park, where the temporary stages are now erected.

Anon. 7:51 - I do too, and thank God it's gone. It was frequently used for impromptu "concerts" at all hours and always at high volume, and when it wasn't being used to wake up the neighborhood it was a Crustie Hotel, and in those days there weren't even that many of them. Can you imagine what it would look like now?!?

Glad it's out of the park. It was so obnoxious the last few years with loud surburban types FLOODING the neighborhood for a big drunk brunch and dog parade day, trampling the park, etc. Once it went corporate it got way too big.

I am so relieved it was moved to the East River Amphitheater. A much better choice for those attending. Last year was a complete shit show. I couldn't even walk on the sidewalk near my flat. It was crazy town. This should have been done years ago when the crowds hovered over thousand people.. I am sure the dog owners will have a grand time on Sunday. I just hope they bring an umbrella. Happy Halloween!

Anonymous 4:49 - I was talking about the 1980s, and no, there were not that many Crusties back then. I was not including the local anarchists and homeless who were living in the park, I was referring only to the seasonal travelers, and 30 years ago they were far more infrequent than they are now. Laugh all you want, but that's the truth of it, jocko.

@10:25 PM
Sorry sporty you have no idea what you're pretending to remember.

Or, and this would be understandable, you can't tell the difference between "the local anarchists and homeless" and the travelers. As there are less bums and local punk rockers by an order of magnitude the travelers stand out in the current park of striving phone staring squares and stroller pushers but there were many more of the dogs-and-backpack kids back then as well. Try visiting one of the remaining squats and ask around. Don't worry, Avenue C is safe and pricey now.