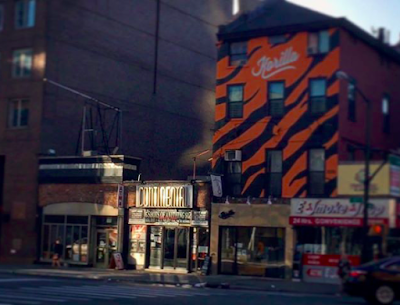 Nearly a year has passed since the initial reports about the future of the northeast corner of Third Avenue and St. Mark's Place were revealed. According to The Real Deal last November, a seven-story, 66,000-square-foot office building with ground-floor retail was slated for this corner.

This is obviously much smaller than what was originally floated. There's some thought that there might be a second smaller building coming to this parcel. (That's 100-percent speculation via some EVG corner watchers.)

Here's an aerial view of the property... 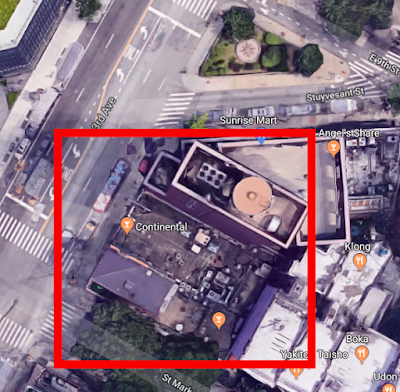 [Via Google Maps and EV Square]

A quick note — the Cooper Union Student Residence Hall at 29 Third Ave. is in the square above — that's not part of the new development and is staying put.

Anyway, here's what is known from the permits, as NYY noted: "Retail will occupy a portion of the ground floor and cellar space. The offices will have a lobby on the first floor, with workspace occupying the rest of the structure. Tenants will have access to bicycle storage, a fitness center, golf simulator, an amenities foyer, and a rooftop terrace."

Morris Adjmi Architects is listed as the designer of record. There aren't any renderings floating around the public sphere just yet.

For a sampling of Adjmi's work, look no further than the 7-story building he/they designed for the explosion site at 121 Second Ave. ...

For a little perspective on the size of the structure coming to 3 St. Mark's Place, the above building is 22,800 square feet.

In the meantime, workers continue to chip away at the mostly vacant buildings on St. Mark's Place and Third Avenue. (Permits were filed this past March 15 to demolish 1 St. Mark's Place, 3 St. Mark’s Place, 23 and 25-27 Third Ave.)

These photos are from Thursday... 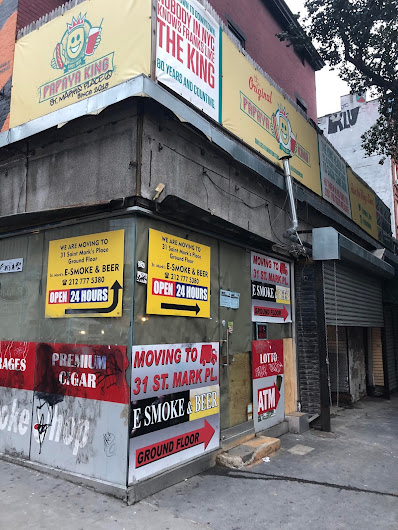 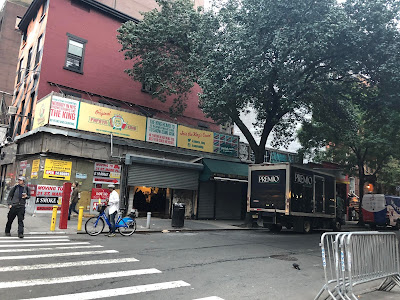 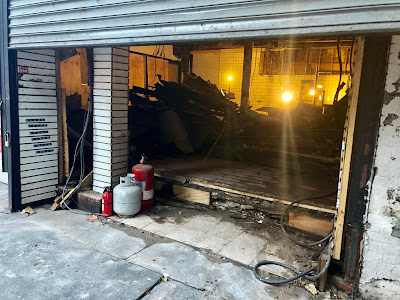 While the interior demo is underway in these spaces, the Continental remains open — the last of the main businesses here. The bar was set to close in July after a 27-year run at 23 Third Ave. However, Trigger, the Continental's owner, announced a three-month lease extension until some time in October.

I asked him about that. "It’s possible that we’ll go till May but far from definite," he said in a Facebook message the other day, adding that he wants to stay until the developers get their permits approved. "It’s all I’ve got."

REEC picked up the 99-year leasehold for the properties here for some $150 million, per The Real Deal last November. The corner assemblage is owned by the Gabay family.

The Continental gets a 3-month reprieve
Posted by Grieve at 4:30 AM

I was puzzled that there were not plans for a much larger (taller) building for this (these lots). Perhaps the developer is stalling the process watching if our Mayor will gift his REBNY sponsors with a change to the zoning laws this far into the East Village. Thanks to Carolina Rivera and her "yes" vote for the unnecessary additional floor on the 14th St tech hub building there will be little legal steps to stop Mid-town South and the horrific Silicon Alley from swallowing up our neighborhood.

Continental refuses to die. I am not a fan but I support their continuing, seemingly against all odds fight for survival.

A ‘golf simulator” on St. Mark’s is completely abhorrent.

I’m not a fan either!

At least if it looks similar to their building on 7th st and 2nd ave, it won't be especially out-of-place from a size/shape/materials perspective. If development has to happen (and in this city, it does), unobtrusive, in-scale buildings are a much better option than something like, say, the Death Star.

I wonder if the Residence Hall bought the air rights, keeping this corner down at 5 stories? I can't wait to see how Adjmi wrecks another corner!

Well I was really hoping for a Macau style casino with adjoining squash courts and karaoke sushi bar. It looks like my dreams will just have to wait.

It is a smaller abomination than I expected.

We’re MID ONSLAUGHT AND HAVE BEEN FOR QUITE SOME TIME. New York hasn’t been the same since 9/11. Change is inevitable, I guess but the SPEED and direction of this change isn’t good. I have lived here all my life (in 54 now) and have never seen such quick and horrible changes.