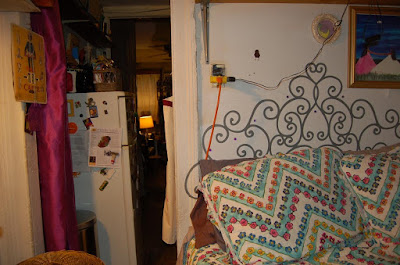 What is your background?

My parents raised us in New York and when they retired they moved to North Carolina. My dad still lives in North Carolina. He retired from the MTA and my mother retired from the Board of Ed. I grew up in Queens and went to Stuyvesant High School when it was on 15th Street. I loved Stuyvesant. It was the first time I was around kids who were geeky like me and we didn’t have to worry about getting beat up. Except when we left.

The first day of school they told the freshmen “don’t ever go below 14th Street.” We couldn’t wait to go below 14th Street. It was scary but there were really great bakeries and thrift stores. That is when I fell in love with thrift shopping. There were methadone programs around Stuyvesant and all the junkies would mess with us. Not in a bad New York street menacing way. They would just curse at us and try and get us to buy liquor for them. There was a liquor store on the corner.

When I was in high school in the late 1970s, the drug being used in the neighborhood was heroin. When I moved to the East Village in 1991 it was crack. The crack vials would crunch under your shoes like snow. At least a crack addict would say “good morning” to you. Now I say good morning to these young tenants and they look at me like “why are you talking to me?”

Why did you move to the East Village and how did you find your apartment?

I was living in Harlem and I found a rat in my closet. I went to the super and I said “oh my g-d there’s a rat in my closet and he said “get a cat.” I said “are you kidding me?” I did get a cat because I did love my apartment. The cat started attacking me. The cat was probably pissed off at me. “Why do you have me in here trying to kill this rat? You terrible woman.”

Most of my friends lived in the East Village. One Saturday I got up, took the train downtown and walked over to the Village Views Realty. I had a friend who lived on that block. I walked into the realty office and a woman named Martha was there. She said, “yeah we’ve got something you might be interested in." We got up and walked over here. I could tell that the floor slanted but it was love at first sight. I definitely wanted the apartment.

By the time we got back to Village Views Realty there were three people waiting to see the apartment. I took it right away. I felt like I got the last rent-stabilized apartment in NYC because the neighborhood starting changing so fast. Like this block changed so quickly. It went from squalor to luxury with nothing in between.

We used to have really cute boutiques on this block. They all had to move. A combination of rents rising and retail changing. I have such cute stuff from those stores that don’t fit anymore. There was a girl down the street who had a boutique where she would sit and sew and make clothes and sell them. If you had an idea she wouldn’t make it for you, she would show you how to make it. She’s gone. I guess Kate Moss was down here shopping picking up some cute stuff. That was the beginning of the end. Everytime I went out I would see something new.

Westminster, Jared Kushner’s property management company, runs my building now. I have to say the maintenance got better after they bought the building though I've heard and believe all the horror stories of other Westminster buildings. They do very aggressive renovations. But unlike my previous management company when something breaks, it gets fixed right away. I have an awesome super. Shout out to Ruben. We had a terrible super before. I had horrible landlords before. It was my first experience going to housing court — they never fixed anything, ever. Westminster has brought some stability but people don’t stay. The young people don’t stay. 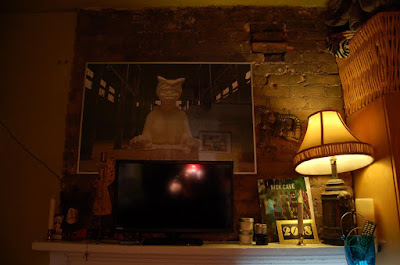 What is the story with the angels?

Before when I was living in Harlem, I had an awful boyfriend. He was demonic. My sister gave me angels to protect me from him. It kind of caught on and a lot of friends started giving me angels. All of those are gifts. I’ve never purchased an angel for myself. I can’t put any more figurines up.

When all of your stuff is showing you want to like what you see. I have weeded down to the books I like and the pictures I like. I don’t have all of my pictures up. That picture is when I met Betsey Johnson in Bloomingdale's. I was such a big fan of hers. When I moved down here I had this fantasy that Betsey Johnson would open up a store in the East Village and I would be the manager of that store. It didn’t happen. 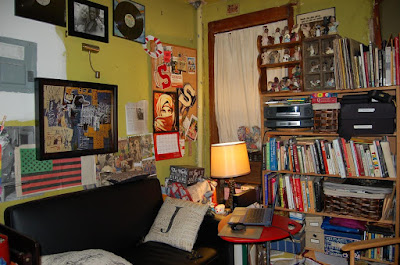 I love the exposed brick. The bathtub is in the kitchen, which is quaint. 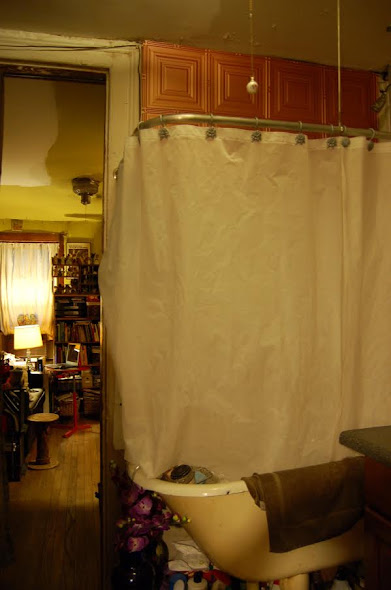 I have had such good memories here. When I first moved here I was in my 30s. I had a lot of parties here. It would be unbelievable the amount of people I could fit in here. People would have a good time. They would actually stay. It was a good neighborhood for that. I was near the clubs. Post or pre club, people would come here.

From my 40s, I have very romantic memories, I had some good relationships, it’s a romantic little spot. Now in my 50s it’s more of a work space. I don’t do that many parties anymore and I’m not in any romantic entanglements at this time. So I work out a lot. I do all kinds of different exercises on YouTube. Everything folds up. I push that chair against the fireplace, this goes over here. I put my yoga mat down and go. 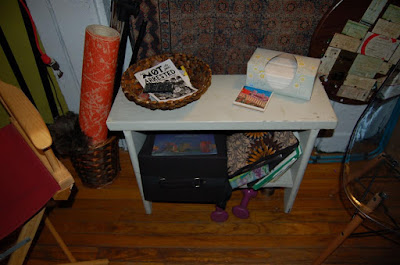 I like the architectural details. It’s shabby in here but in my mind’s eye I can see that around the cornice in the bedroom, if I had the time I could paint this a color and that a color. 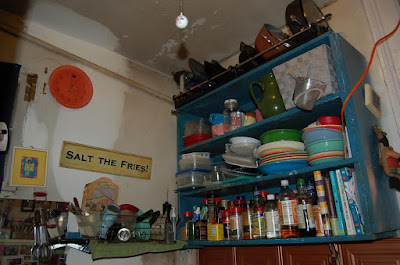 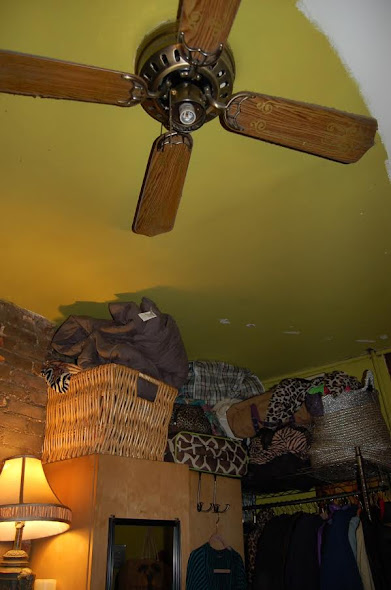 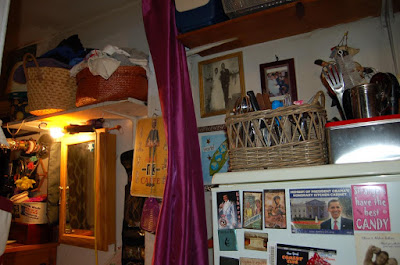 I was freelancing and then I took a job with a nonprofit, and when I got laid off it was 2011. There were no jobs. I was doing public relations. I had worked at big corporations all of my life. We had a social media department but by 2011 they expected a PR person to tweet and do everything. I didn’t know how to do that. I’ve learned how to do that now because those are the kind of skills you learn by doing. I knew the best way to find a job was to start working.

I went over to the Museum of Reclaimed Urban Space, MoRUS, on Avenue C. I started volunteering with them. At MoRUS, we do walking tours of the gardens on Saturdays and activist spaces on Sundays. We have an exhibit now for political punk. How punk music intersects with politics. Usually we have pictures of direct actions that happened over the years that gave rise to the community gardens and the squats. We also show photos of how the neighborhood looked before.

Eventually I got a job. I work in Union Square so I walk to work. I make very little money but I don’t care. You can’t put a price on being able to walk to work. I can meet my needs fortunately because I have a rent-stabilized apartment. I’m an administrative assistant now. I was a senior director at one point. I didn’t realize the level of stress I had at that job. I don’t want to do PR ever again. I do customer service now. I like helping real people solve real problems.

If I didn’t have a rent-stabilized apartment I would probably have to move to North Carolina. 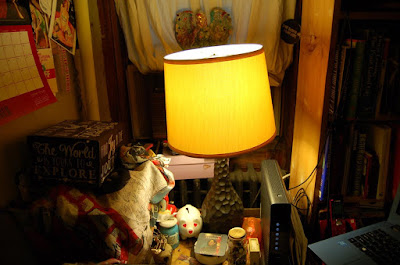 If you're interested in inviting Susan in to photograph your apartment for an upcoming post, then you may contact her via this email.
Posted by Grieve at 6:12 AM

yes! another terrific installment! love this person's attitude toward life! i hope she continues to enjoy her rent-stabilized apartment, and that the city continues to benefit from her bright and wild presence, for many years to come!

Nice reading about someone who benefits from having a rent stabilized apartment and actually deserves to have it.

The bathtub was in the kitchen, but the toilet was out in the hall - two doors, side by each, for the four apartments on each floor.

This is a great interview with the kind of person I'm glad still lives here, and the apartment is nice & has great personality; she says it's "shabby" but I say it's "real" and reflects well upon the person who lives thee!

BTW, I have rooms in my home I haven't painted in 20 or more years; I used to do that all myself but now I can't, BUT it doesn't matter b/c it's HOME and it's a REAL home - like this lady's is. IMO, REAL people entrench & live in REAL homes, and not short-term in some "curated" ugly, sterile, hyper-modern, all-glass space with poured concrete floors, etc.

There was a girl down the street who had a boutique where she would sit and sew and make clothes and sell them. If you had an idea she wouldn’t make it for you, she would show you how to make it. She’s gone.

I think I know the store; was it "Revamping Retro"?

A friend once gave me a crocheted shawl from Lo: New York; I still have it.

This brought a tear to my eye. A perfect example of why NYC needs expanded rent stabilization for residential and commercial units.

but Anonymous #2 at 12:54 PM... you can go f*ck yourself with your "someone who actually deserves it" How many people do you know that moved to the East Village in 1991 don't "deserve" their apartment.

Glad you have a responsible and accountable landlord who is good at fixing things when they break.

another great entry and photographs!