Only 178 shopping days left until the L-train shutdown 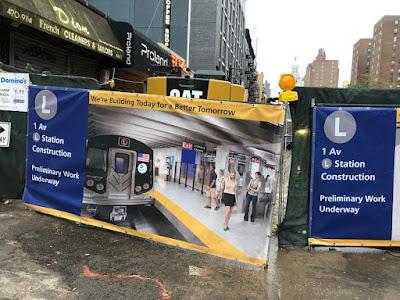 As you may have heard, read, seen, the MTA yesterday announced that the much-anticipated and long-dreaded (but necessary!) L-train shutdown will begin on Saturday, April 27, 2019.

If you missed this, then here are more details via the MTA news release, shared here...

MTA New York City Transit (MTA NYC Transit) and the New York City Department of Transportation (NYCDOT) announced new details about what customers can expect ahead of April 2019 when the L train tunnel between Manhattan and Brooklyn is closed for 15 months for extensive repairs from Superstorm Sandy...

• The L tunnel will close for its 15-month reconstruction on Saturday, April 27, 2019. This means that the last day for L service between 8th Av and Bedford Av in Brooklyn will be Friday, April 26, 2019. L train service will continue throughout Brooklyn, between the Bedford Av station, which will remain open during the tunnel closure, and the Canarsie-Rockaway Parkway station.

• The alternative service options for customers, which includes five additional bus routes, a new M14 Select Bus Service on 14th Street and a ferry service, will begin on Sunday, April 21, 2019, to allow for customers to sample and become acclimated to new travel options. The additional subway service on other lines – more than 1,000 additional roundtrips – will begin on April 28, 2019, following the L tunnel closure. Read the full plan for temporary service options in support of the L tunnel reconstruction project.

• Customers will be able to meet in person with MTA NYC Transit and NYCDOT team members to plan their routes, through a series of open houses, pop-up events or one of the three mobile information centers – two vans and a bus – which will make stops to meet with customers. Official dates and times for open houses and schedules for events and the mobile information center locations will be posted on the L tunnel reconstruction website once announced.

• Numerous stations have received or are receiving capacity expansions, with newly reopened or expanded entrances, stairs and corridors. NYCDOT and MTA NYC Transit are coordinating with key City agencies – such as the NYPD, Department of Buildings and Citywide Events Coordination and Management – on aligning City operations with the needs of L train alternate transit services, including working to minimize disruption from construction projects and events.

• The construction for the project is on schedule. In Manhattan, the construction site footprint and hours of work both reduce between 1st Avenue and Avenue A in January 2019. In Brooklyn, most barricades will be removed along with permanent street and sidewalk restoration on Bedford Avenue by early November 2018, and throughout early 2019, work will continue to open and do permanent finishes on the additional stairs, three of four which have already opened for increased capacity.

• Officials are committing to monitor the air for particulates typically caused by diesel emissions, known as PM2.5, and making results publicly available. This is in addition to the air quality monitoring already in place for the project’s construction sites.

“We’re continuing unprecedented efforts at public outreach, responding to local communities and giving as much notice as possible on key dates in this project,” said NYC Transit President Andy Byford. “With the l running as a Brooklyn-only service for 15 months starting after the weekend of April 27, we’ve been hard at work with our partners at NYCDOT and other City agencies to make sure that the alternate train, bus, ferry and bicycle networks work together to get people around successfully.”

“With DOT crews now putting down new street markings for bus lanes and bike lanes, we are deeply committed to having our streets ready for the l tunnel closure next April,” said DOT Commissioner Polly Trottenberg. “From a ‘bus bridge’ over the Williamsburg Bridge to the 14th Street Busway, from more Citi Bikes to expanded pedestrian space for displaced l train commuters, we and our MTA partners are up for this enormous challenge.”

For a reminder about remaining L service changes in 2018, visit the L 2018 service notice page. To help customers plan ahead in 2019, new service information details about the L in 2019 include:

The gentries and transients that have luxurified Williamsburg and Bushwick are screwed. Expect the long awaited hipster exodus.

Should have fixed this tunnel immediately after the storm. I wonder if Mario's son Andy's developer donor buddy on the MTA board had a say to keep it delayed for 6 years.

It's about timed for the Great Exodus to the Suburbs.

I expect this shit show to last more than a year and a half. Try two years and a half. Maybe three. This is the MTA after all where corruption, greed, and deceit reigns. I feel sorry for L train commuters. Maybe the ferries will help?

I take your three and raise 3 more.