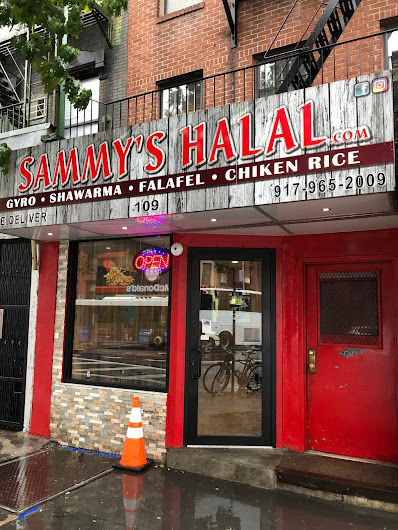 Last we checked, things weren't looking promising for Sammy's Halal at 109 First Ave. ... we hadn't detected too much going on inside the space between Sixth Street and Seventh Street ... however, after a flurry of recent activity, Sammy's debuted this past Friday.

The Sammy's menu notes a 10-percent discount for police officers, students, hospital employees and cab drivers. (The menu notes with ID, so in case you were going as a cop or doctor for Halloween ...)

This makes the third Sammy's location, joining the one on Sixth Avenue and Fourth Street and the one in Jackson Heights.

Previously on EV Grieve:
Sammy's Halal signage arrives at the former Polish G. I. Delicatessen
Posted by Grieve at 4:05 AM

The gyro is actually a buck less than you get from all the trucks on the street. 2.99 is a little over what you get from the donut trucks for an egg and cheese. Kudos.