This is the story of how Geoffrey Weglarz died on 12th Street, and why it took a week to find him 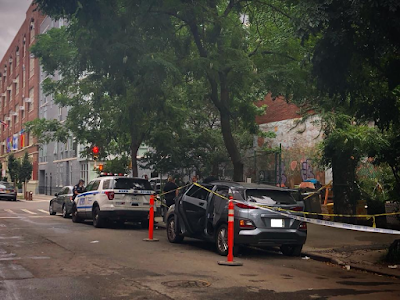 On Aug. 31, police found the body of a man in a car on 12th Street just west of Avenue B ... and steps away from Joseph C. Sauer Park.

Michael Wilson at the Times files a lengthy piece on 61-year-old Geoffrey Corbis, who changed his surname from Weglarz, a software engineer who took his life in the car by ingesting a vial of poison. His body remained in the car for a week.

The chain of events serves as a stark reminder that even in 2018 Manhattan, a city that lives beneath the nonstop gaze of countless surveillance cameras, one that for years has urged its citizens, if they see something suspicious, to say something, it is still possible for a dead man in a parked car on a busy block to go unnoticed for days.

The events leading up to and following that August day also unspool a story about a distressed man’s plan to raise some fast cash, thwarted by circumstance, and his grim resolve in his final hours to end his life, detailed in farewell text messages to his loved ones. 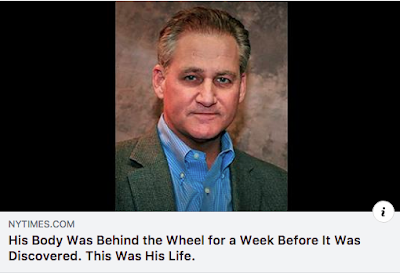 What's especially striking and heartbreaking is that his family asked the police for help in finding him, but they were met with resistance — and bureaucracy.

You can read the article to learn more about how the Connecticut resident ended up in the East Village. (It's a lot to summarize.)

Weglarz lived in NYC for many years, and worked at the software company Hyperion with Yale, Harvard and Brown among the schools who were his clients. As the article noted, he was married and had a son, and later lived in a 19th-century house in Fairfield, Conn. Following a series of mergers in the software industry, he ended up at Dell, but eventually grew tired of the travel. Now in his 50s, he struggled to find work, having applied for nearly 500 jobs. He was divorced earlier, and shared custody of his son.

Weglarz, who had been growing despondent over job prospects and financial difficulties, apparently drank the vial of poison used for euthanasia in his car on 12th Street on Aug. 24. (Earlier he told his sister that he bought the vial on the dark web.)

On that day, he texted Sal Biagini, a friend in New York. Concerned by the tone of the texts, Biagini called 911. The NYPD traced Weglarz’s phone to the closest address, 520 E. 12th St. However, they didn't take notice of the car parked nearby. Other neighbors and city employees also overlooked the man slumped behind the wheel.

Traffic officers who write parking tickets most likely passed by him at least twice, on days that his car was parked illegally. Officers looking for violators on street-cleaning days — on East 12th Street, those days were Tuesday and Friday — routinely ignore vehicles when the driver is sitting inside. Mr. Weglarz’s vehicle received no tickets on the Tuesday or Friday when it was parked illegally, suggesting an officer might have seen him and assumed he was just another idle driver.

A week passed before he was discovered.

The episode left Mr. Weglarz’s family furious with the police. They don’t believe the chances were high that their brother could have been rescued after ingesting the poison, but they said he should not have been left there for a week.

The police spokesman, J. Peter Donald, said officers did what they could with the information they had, including canvassing city hospitals. “Unfortunately, those efforts did not locate Mr. Corbis,” he said.

Mr. Weglarz was cremated in September. His sister plans to scatter his ashes in Manhattan, home to many successes in his acting years and where he began his computer career, long before the day he parked his car on the street and never left.


Previously on EV Grieve:
Reader report: Body found in car on 12th Street near Avenue B
Posted by Grieve at 4:30 AM

The police did not leave him there for a week -
for that to happen, they would have, to have known he was there.
He may have slumped down or looked like many
drivers taking a nap, which is a common sight.

Very difficult to find employment after a certain age -
even with lots of terrific experience.

Not surprised by NYPD's indifference. Many of them are Lazy and Don't-Give-A-Shit about anything. I know I've experienced it in the past.

@8:10 AM
The police follow procedures set in place for just about every situation, it is when they don't follow these we have a problem. The NYPD did nothing wrong in this case, they followed state law regarding missing persons.

What a handsome man. Still very young too. So sad :(

I walk down this block almost every day. I know I walked by him more than once. If I'd only realized.

Read the NYT article, the police did nothing wrong. Plus, Geoffrey, with quite a lot of deliberation, killed himself. He is the one in control and "at fault" for his death. Unfortunate that his career and marriage deteriorated and he felt compelled to check out. It could happen to many of us.

So sad. I don't blame the NYPD.

This is a tragic story of a man who had so much only to end up committing suicide with next to nothing left. He should have went to his friends and family for help and they should have gotten him some assistance from a mental health professional. Very tragic.

I just read an article on the Daily Mail about this. This really hits close to home.

It stated how he was depressed and living with Aspergers. His life was beset with loss and isolation. And he had a run with the law when he threw food at a manager at Mc Donalds just after he his wife left him.

So sad this man died so tragically and young. My heart and condolences go out to his loved ones :(

Condolences to his family. I walked by him several times during that week and didn't smell anything. I feel terrible that I hadn't noticed him in the car, I definitely would have called.

I am a loved one/close friend of Geoff's. I want to elucidate all on the process of how it is to report a missing person in NYC. Having received a good bye text from Geoff while at work and I didn't see it until hours later (his loved ones also received such text) after him staying with me in the East Village, I knew this was the end. The family and I begged and pleaded for NYPD - 9th precint to open a missing person and help us investigate or put in the system Geoff's license plate number.

As per law, NYPD can only open a missing person case for a NY resident even if a person vanished in NYC. Does not matter if the person is in high risk mental status or have a serious medical condition that predisposes the person to self risk. The law is the law. Let's say, there was someone visiting NY and vanish, NYPD still does not initiate a case at all. No exceptions. As per law, only the police department for the person's state of permanent residence can initiate the case. After jumping through legal hoops for close to a week, a case was finally opened in Florida.

When I went to the 9th Precint, I was given a list of hospitals with mental facilities for me to personally outreach. I contacted each and every single one of them for almost a week on a daily basis and even contacted the morgue and nothing. I posted his picture online and spoke to neighbors about searching for him. If only I knew he was down the block...

Rest in peace my beloved Geoff.

Lynda I am very sorry for your loss. Maybe his memory be a blessing to you and to his other loved ones.

Lynda Laetitia, I hope you find some comfort knowing you did ALL you possibly could do to help your friend.

Why are we spending a TRILLION $ annually on all these useless wars, when someone like this could have been employed with those tax dollars? Despite endless PR pushing the fictional Trump economic boom, businesses are closing at record rate. I guarantee his story is in the thousands, unsung and unknown. This poor unfortunate is another casualty of govt corruption and citizen apathy.

You said it. Lots of people this age I know are perfectly competent with technology (much more so than the average Millennial), and yet they are dismissed as being luddites and incapable of learning new things.

This story makes me angry because I joke all the time that I don't have a single problem a bullet to the head can't fix. But I will save that for when the money actually runs out.