Feltman’s moving away from Theatre 80 on St Mark's Place 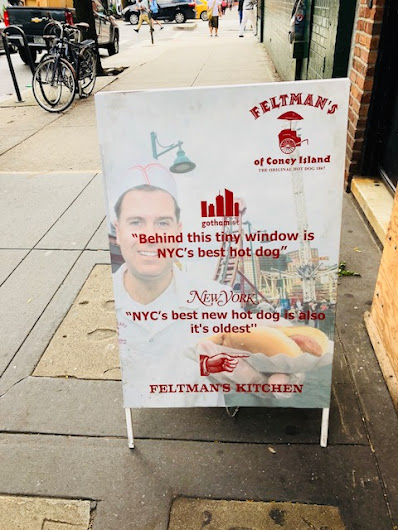 Today is the last day to enjoy a hot dog at the Feltman’s of Coney Island outpost at Theatre 80 on St. Mark's Place.

Feltman's owner Michael Quinn shared the news with me via email.

"Grateful we are for the last several years at 80 St. Mark's, unfortunately, we have outgrown the location — but stay tuned because we’ll be back bigger and better in a yet undisclosed space," Quinn said.

He started selling hot dogs from inside the William Barnacle Tavern at Theatre 80 in August 2016. Shortly after, Gothamist declared that Feltman's served NYC's best hog dog.

Upon opening on St. Mark's Place in 2016, Quinn said that he had found a good match with Theatre 80 operator Lorcan Otway.

"Lorcan and I are both native New Yorkers and historians who believe in the preservation of NY history and small businesses," Quinn said at the time. "Lorcan told me that he loves that fact that Feltman's is going from what was the largest restaurant in the world at Coney Island to the smallest kitchen on St. Mark's Place."

And moving forward: "We ask you to please support Theatre 80 and the William Barnacle Tavern."
Posted by Grieve at 4:30 AM