CB Developers pay $59.5 million for an interest in 358 Bowery — current home of the B Bar & Grill and likely a new development 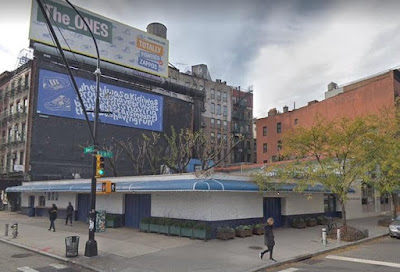 It looks like the corner site that houses B Bar & Grill, which helped usher in a new upscale era on the Bowery when it opened in 1994, will yield to a new development with the help of air rights from nearby parcels.

Public records show that Charles Blaichman's CB Developers, whose portfolio includes multiple projects along the High Line, purchased an interest in 358 Bowery, which is owned by downtown hotel impresario Eric Goode, for $59.5 million.

Goode bought the property on the Bowery at Fourth Street in 2004 from the Cooper Union for $5.5 million. According to PincusCo, Goode, whose multiple interests include the Jane Hotel, the Bowery Hotel and the Waverly Inn, has been assembling air rights to build a larger project on this corner space.

In January and February 2017, Goode filed records with four additional parcels into a single zoning lot which would allow for a larger building on the site. In addition, Goode paid Granite Management, which owns two of those buildings, $1.6 million for 4,670 square feet of development rights and Goode paid $1.8 million to a small cooperative building at 32 East 4th Street for 4,012 square feet of development rights.

The transaction will likely also mean the end of B Bar & Grill, whose arrival at the site of a former gas station was marked by controversy in 1994.

Per Forgotten New York: "The NoHo Neighborhood Association, Community Board 2 and the SoHo Alliance were concerned that this conversion would change the character of the neighborhood and mounted a lawsuit, arguing on the basis that the neighborhood was dominated by light industry and artists. The area had 47 one-story buildings, and there was a fear that precedent would be set for conversion of many these buildings into clubs." (The Times had a report here in 1994.) The plaintiffs withdrew the lawsuit in 1995.

To date nothing has been made public about the B Bar & Grill's future.
Posted by Grieve at 4:31 AM

Email ThisBlogThis!Share to TwitterShare to FacebookShare to Pinterest
Labels: 358 Bowery, B Bar

Sorry Not Randy "Macho Man" — you missed it. I posted the story on Monday morning.

The one good thing that the Bowery has going for it at the moment is that its a wide avenue with lower buildings and plenty of sunlight. If they turn this into a row of condos, hotels and office buildings, it just becomes another Houston Street Horridor.

Of course I missed it. I did not want to scroll through your whole blog so I just scrolled through your summary in the right side and missed it there too.

Avraham Adler needs to invite me to his parties--Savage!

Insert generic photo of blank-looking glassy building that could be anywhere, and you will know what this development will look like.

Nobody in the world of NYC government seems to appreciate the value of low-rise *anything* - there is this insane compulsion to encourage and even pay for (via tax abatements) the tallest, most light-blocking and air-blocking buildings possible, with ZERO thought given to how the additional population will impact traffic, transit, police, fire dept, schools, or anything else.

My conclusion is that NYC is run by brain-dead and/or on-the-take humans.

Glad to see that there was another generation of hand-wringing over neighborhood changes.

Well, there really goes the neighborhood. The Bowery, even now, is unbearable from Thursday-Saturday. I'm running out of places to walk the dog.

What you’ve missed here is the concept of “neighborhood.” Between cell phones, headphones, tourists and ugly, soulless high rises, this is no longer a neighborhood. That’s what we are lamenting.

The brothers who own the 2 building next to B Bar have been trying to develop the property for years. That whole block will be high rise living in a few years. Somebody said souless. Souless is right.

Incredible amounts of money being spent for development on the Bowery which still has a large amount of homeless men begging up and down that area. Especially in front of the 7 11 and around the large homeless shelter between the Bowery and 2nd Avenue. I guess the developers do not seem to mind them.

And to think I was outraged when they cut the tops of the trees in BBar's patio so the billboard could be seen. Now the trees and more of our sunlight will be gone forever. I always thought Eric Goode was a "good guy" (founder of a global conservation organization) but I guess he is more interested in saving the turtles than in preserving the culture and architecture of the Bowery and the quality of life in the East Village. In the end Eric, it's all about money, isn't it?

I'll really miss the B Bar even though I usually don't mind seeing old ugly buildings replaced by modern glass and steel.