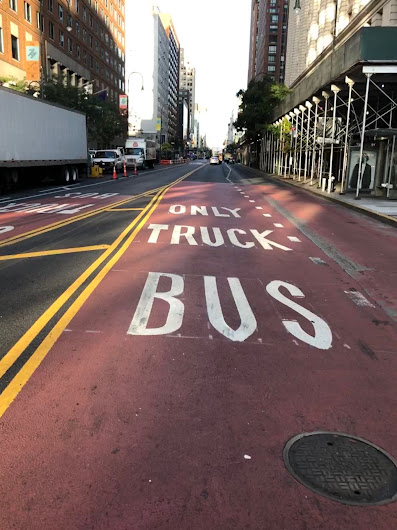 Here's a quickie overview via the DOT:

6 a.m. to 10 p.m.: Buses and trucks only between Ninth Avenue and Third Avenue. All other vehicles may make local trips, but must turn at the next available right.

10 p.m. to 6 a.m.: All vehicles may make through trips along the corridor. 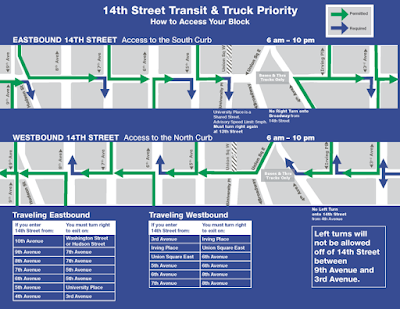 This DOT link has more information about the busway, which is expected to be an 18-month pilot program.

The city will install onboard bus-lane-enforcement cameras along the M14 routes this fall. However, DOT officials said that they won’t start issuing tickets for another 60 days.

Streetsblog had more on the enforcement yesterday:

Stationary enforcement cameras on every block to catch drivers blocking bus lanes and for failing to exit 14th Street at the first available right turn after their pickup or drop-off. Those $50 tickets — rising by $50 to a maximum of $250 for every infraction in the same 12-month period — also won’t be issued for 60 days.

As for more backstory: In late June, right before the new busway was to launch on July 1, a coalition of block associations filed a last-minute lawsuit to block the project, arguing that the city failed to complete the proper environmental review for the work. (Lawsuit No. 1!)

The busway was originally to coincide with the arrival of the new M14 Select Bus Service, which debuted on July 1 featuring off-board fare payments and all-door boarding... all in an effort to speed up the notoriously sluggish M14 line during the L-train slowdown.

DOT officials said they hope to improve M14 travel time by up to 30 percent on a corridor that’s one of the slowest in the city.
Posted by Grieve at 4:30 AM

This plan is watered down at every aspect. If tickets will only be issued in 60 days it means that it is a 16 month pilot and not an 18 month pilot program. Originally they said it was suppose to be automated enforcement, now they reveal that it will be enforced by the NYPD who will not issue tickets to any placard holder. Since when the law allows 5 MINUTES IDLING in a bus lane ???? As always the NYPD is an impediment to improving life quality in the city

There will be more traffic on smaller streets like 12th and 13th streets.

Curious if data will reflect that the MTA cut several M14 bus stops?
Obviously that will speed buses though hugely problematic for people who used the bus stops.

Also wondering....was there ever any data about why the M14 was slow? As opposed to the other slow crosstown buses - at 23, 34, 42 and further uptown?
Virtually all crosstown buses are slow - because of traffic congestion.

Any chance the demographics impacted?
Perhaps there are more elderly riders on the M14 and more time taken to get on/get off the bus?

Nonsense. There is already too much traffic on 12th and 13th streets, and on 11th street. Look at 10th Street: 10 vehicles can move through a light cycle and there already 5 lined up behind them.

Last night a news report said the DOT says this will save five minutes on the average commute. All of this disruption to save five minutes? Chaos on the residential side streets, frustrated drivers, etc...Take half the Uber drivers off the road and 14th St, Ave A and Ave D would not be so slow.

I have an idea for all the folks saying more traffic on other streets: we need less cars. That's the point.

If there were no cars in Manhattan then there would be no income revenue to fix the MTA. You would then have to pay five or six dollars for a subway or bus ride.

Total propaganda joke, you look west of fifth avenue? bumper to bumper slowness of buses and all.

Cras popping in and out of garages so theres that still

Requires hoards of cops at every corner and they were making vehicles turn south on the new University Place pedestrian plaza, all for a few minutes of faster bus time today. Absurd.

I support car free zones all around, this one is a bit odd in the implementation.

The MTA screws around with its "data" again. Yeah, you can speed up the buses enormously if you just take 40% of the stops away!

This is not bus service, it's bus non-service, and it's ALL window dressing.

You know what would really speed up traffic all across the borough - get rid of all the Ubers. The city refuses to even TRY to quantify the amount of congestion they cause.

I missed it. Did the world end?

This is so poorly implemented. 14th ST is a Main Street, why would they stop cars? At least only make this rule during rush hours...

3rd Avenue from 20th street down to 14th was bumper to bumper all day today as a result of the new rules. Cars turning left from 14th onto 3rd have slowed the entire avenue down. Neighborhood killer.

Since 2nd Avenue was closed south of 14th Street due to the street fair of course there was more traffic on 14th Street as well as on 3rd Avenue. This was a street fair issue, not a busway issue. And no, the world didn’t end. Not yet.