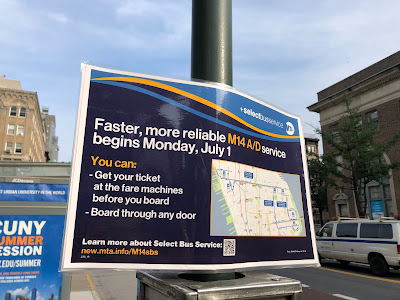 Starting today, the MTA is instituting Select Bus Service along the notoriously sluggish M14A and M14D lines, as we've been reporting. 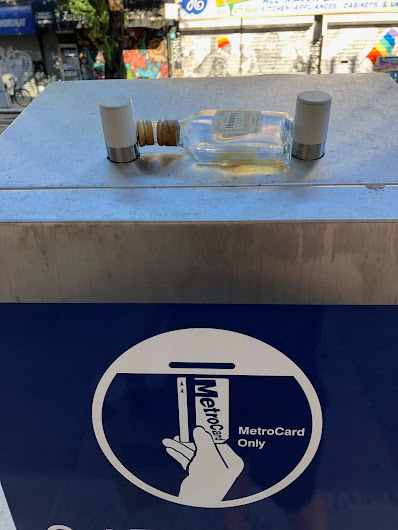 To also help speed up travel times, the MTA eliminated 16 stops (down from a proposed 22) along the M14A and M14D routes. You can visit this MTA site for the new route map and info on how to pay the fare on SBS routes.

Several stops along the route were also moved as a result of the cuts. For instance, the southbound M14A stop on the lower part of Avenue A is now directly in front of Boulton & Watt (the taxi relief stand relocated around the corner)... 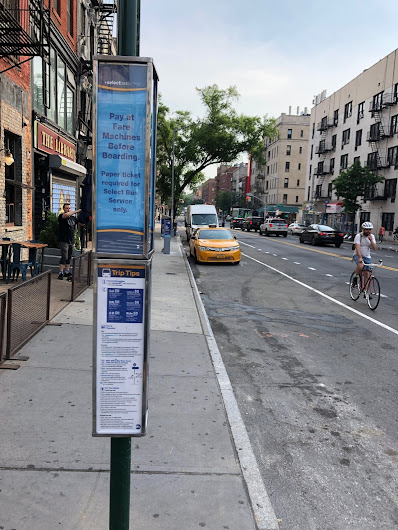 And we've already heard from a few readers who pointed out that this stop might be a tight fit for passengers entering and exiting buses, having to navigate space with pedestrians as well Boulton & Watt sidewalk cafe patrons... 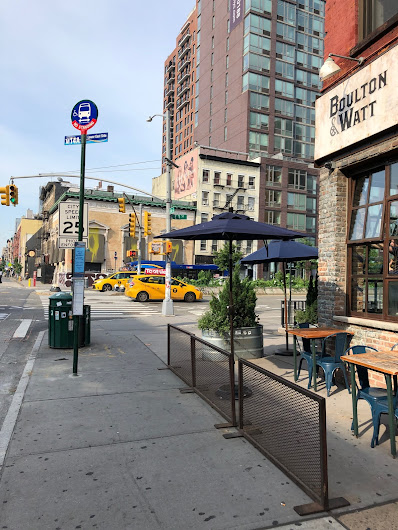 A little further north on Avenue A, the stop on the west side between Fifth Street and Sixth Street... 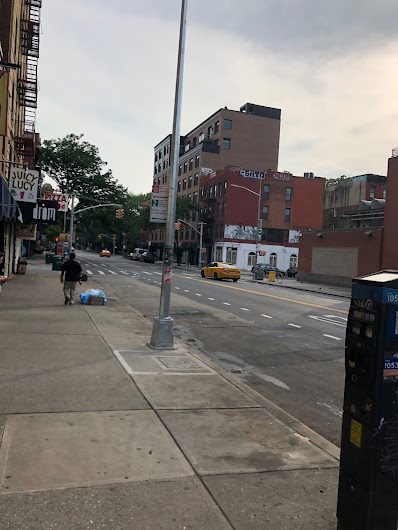 ... is now between Fifth Street and Fourth Street... 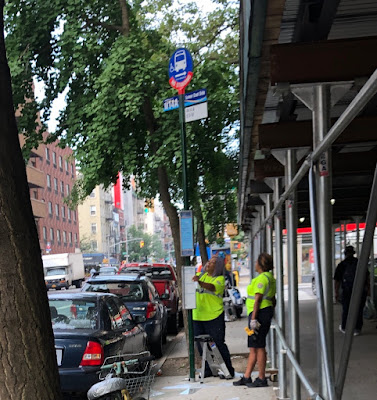 There wasn't any mention of this posted, and the city promptly ticketed all the vehicles parked here... 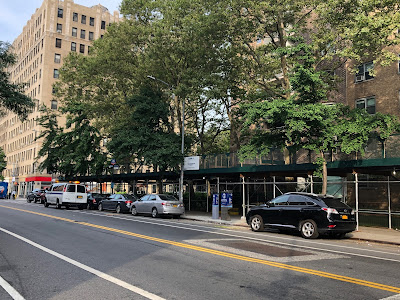 Meanwhile, the car-free busway set to debut today on 14th Street between Third Avenue and Ninth Avenue is now on hold.

In a temporary restraining order issued on Friday, New York Supreme Court Justice Eileen Rakower ruled that the Department of Transportation had failed to provide sufficient evidence that the new street design did not warrant an environmental review.

The 18-month pilot program, which had broad support from transit advocates, would have restricted private through traffic in both directions between 3rd and 9th Avenues, with the goal of speeding up the notoriously slow 14th Street buses. Paired with the long-awaited arrival of Select Bus Service in the area, the city estimated that bus speeds would improve by as much as 30 percent for 27,000 daily riders.

Last week, the West Village and Chelsea block associations filed a lawsuit claiming that the vehicle restrictions would cause a nightmare of spillover traffic on side streets.

Arthur Schwartz, a frequent opponent of bus and bike lanes who filed the lawsuit on behalf of the community groups, told Gothamist on Friday that he was "feeling happy for my kids who aren't going to have traffic jams outside their windows every day, and for me. I guess my lungs matter too."

As the Post noted, transit advocates ridiculed Schwartz as an out-of-touch "wealthy property owner" who doesn't "understand the needs of the 27,000-plus people who take 14th Street buses each day."

“This sort of small-minded and self-interested behavior has degraded the public transit system to the sorry state it is in today,” said Transportation Alternatives Advocacy Director Tom Devito.

Arthur Schwartz apparently has an ax to grind ever since he lost his "free" parking space in front of his W Village town house. I hate when the wealthy must suffer for the masses...

Is Devito just speaking to hear his own voice? The system was allowed to collapse by decades of abandonment by the State - officials like Cuomo who aren't in charge except when it makes a nice media appearance.

I'm sure the MTA feels this is good exercise for all of us, esp. the elderly, the disabled, and anyone who is carrying heavy/bulky packages. And it's even MORE fun in the rain, sleet, ice, or snow.

Andy Byford AND De Blasio both need to be sentenced to begin EVERY commute of theirs from this stop, no matter where they are actually going.

The al fresco bar is a good idea!

I see the short-sighted bastards have taken away the Ninth Street stop. Making it so difficult for people to use the M8 West Street crosstown transfer. Rot in hell, MTA!

@noble neolani: the free parking spot in front of Arthur Schwartz’s house is still there