1st sign of the San Loco signage on Avenue C 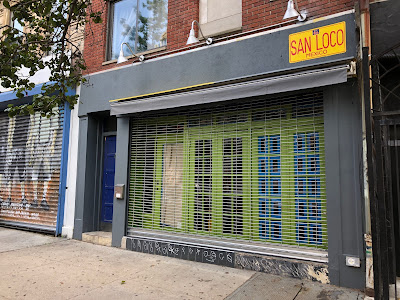 As a reminder — San Loco is opening soon at 111 Avenue C between Seventh Street and Eighth Street... the San Loco sign is now out front... 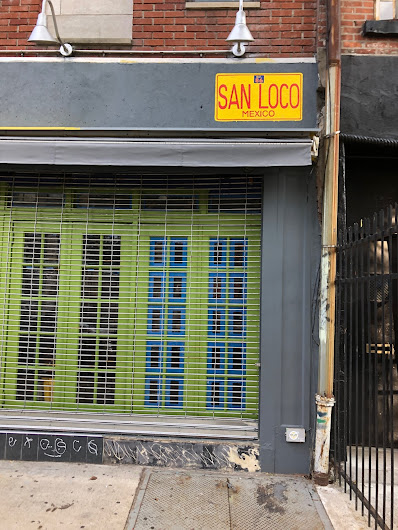 We first reported on the news in late April. You can find more background at that post.

As previously noted, the quick-serve Tex-Mex restaurant debuted on Second Avenue in the East Village in 1986. Owners Jill and Kimo Hing recently posted about that first San Loco on Instagram... here's a photo from 1986 at 129 Second Ave. (and next to B&H)... 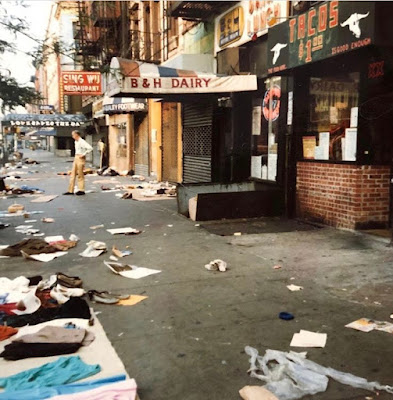 San Loco would later move across Second Avenue to this spot.

Previously on EV Grieve:
It's official: San Loco is returning to the East Village

San Loco plotting an East Village comeback?
Posted by Grieve at 4:15 AM

Holy shit, awesome photo. That block was my home in the 2000s. Looks exactly like the scene described in King Missile's "Detachable Penis":

"So I went to the Kiev, and ate breakfast.
Then, as I walked down Second Avenue towards St. Mark's Place,
Where all those people sell used books and other junk on the street,
I saw my penis lying on a blanket
Next to a broken toaster oven.
Some guy was selling it."

Oh my God, the original SL storefront and the Thieve's Market! Love it!

I still miss Love Saves the Day, and you can just make out Kiev in the distance. In terms of quality, Love Saves he Day beat the Thieves Market every time, unless of course you were trying to buy back things that had been stolen from your apartment.

That neon Sing Wu signage was classic. They served Cantonese food, which they called Peking Cuisine, and later started serving Szechuan as tastes changed. Of course that whole building is gone now, destroyed by the gas explosion, but we still have our pictures and memories.

is that what the street looked like all the time, or was this some sort of 'special' occasion? for this blog my 10-year residency is n00b