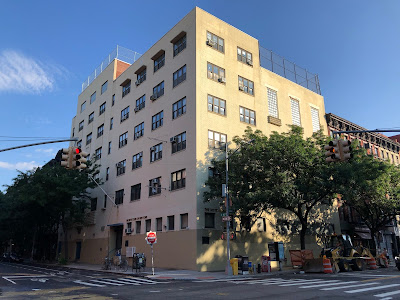 Last Wednesday, news arrived that "a wealthy, anonymous individual" had purchased the the Boys' Club Harriman Clubhouse on Avenue A and 10th Street.

We had heard rumors in previous weeks of such a transaction; and that the Boys' Club would continue to lease space here for another year.

As for the buyer, per Crain's:

Paul Wolf, a real estate broker and adviser who specializes in working with nonprofits and who represented the foundation, said the buyer wanted to remain anonymous. Wolf said the buyer was planning to sell the property, potentially at a substantial loss, to a nonprofit that would maintain its civic use.

"The goal is to keep this as a community facility," said Wolf, who is co-president of the firm Denham Wolf. "The intent is to sell it to a nonprofit at a lower price than the purchase price."

As the Daily News noted, "The buyer, who bought the land as a foundation, wants to remain anonymous, according to the sources, one of whom said he had to sign a non-disclosure agreement as part of the deal."

The deal here has residents recalling the anonymous donor who came to the rescue of St. Brigid’s on Avenue B and Eighth Street in 2008, sparing the circa-1848 building from demolition and making it possible for the structure to be reopened as a parish church.

The Archdiocese of New York announced on Wednesday that a donor had come forward with an “unexpected but very welcome gift” of $20 million after a private meeting with Cardinal Edward M. Egan, the archbishop of New York.

The gift includes $10 million to restore the building, at 119 Avenue B; $2 million to establish an endowment for the parish “so that it might best meet the religious and spiritual needs of the people living in the community”; and $8 million to support St. Brigid’s School [ed note: closed now as of June 2019] and other Catholic schools in need.

We never heard definitively, but — via the rumor mill — the leading candidates behind saving the church were Irish-American philanthropist Chuck Feeney, Yankees owner George Steinbrenner, Donald Trump and Mel Gibson. (And Matt Dillon!)

Now various residents and readers are searching for clues behind the identity of the person who bought the Boys' Club building, which opened in 1901.

Public records show that the 7-story building was sold to 287 East 10th Street LLC c/o Denham Wolf Real Estate Services for $31.725 million, as per the "Details" document and page 12 of the deed accessed here. 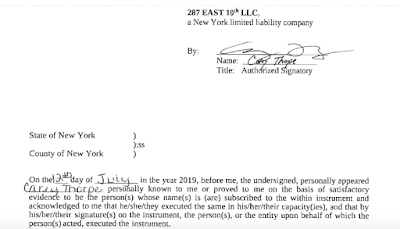 So the searching and guessing will continue.

Meanwhile, Sen. Brad Hoylman shared his thoughts on the developments here. He spoke out against a potential sale last fall with several other local elected officials who had concerns about the loss of the services the Boys' Club provides to the neighborhood:

"Whoever this angel investor is, I want to thank them on behalf of our community. They are saving a century-old community facility from being converted into luxury condos or a high-priced hotel, which sadly has been the real estate narrative for the East Village.

While I wish the Boys’ Club had never put the Harriman Clubhouse on the open market in the first place, I’m grateful to them for finding this angel investor that will allow young people and families in our community to continue to benefit from this splendid facility.

I’m hopeful that the unnamed foundation will work with Community Board 3, elected officials, and other local stakeholders to ensure that community organizations have a place in the new building and that the Boys’ Club, which is reportedly taking space in the building, will decide to stay in this location and continue to provide the essential services it offers to boys and young men."

Previously on EV Grieve:
Conspiracy theories: Who was the anonymous donor behind St. Brigid's $20 million donation?

RUMOR: The Boys' Club building on 10th and A has a new owner; will remain in use as a nonprofit
Posted by Grieve at 4:26 AM

I don't think LLC's are listed in the NYS Corporate Database. That's kinda the point of creating an LLC.

It doesn't say much about the people we elect to lead the city, that it is now up to private individuals to step up and spend their money to try and maintain some of the ecclesiastical, ethnic and progressive history of New York.

We were lucky with the BCNY. But what about the other issues that we lost or are about to lose: East River Park, TCP? We have weak leadership and/or no leadership by our pols. They do the usual Dog 'n Pony show... Then they disappear... only to return to issue a press release implying that they care. they fought. NOT. It's the worst of ONE PARTY RULE. It makes you wonder how much better our lives would be in the EV with a real debate. I guess, we'll find out if we lose the 2 park issues.

@Gojira: There's very little to be said in favor of most of the elected "leaders" in this city on any level, on about any issue.

9:28 a.m.: The Dept. of States database definitely includes LLC's, but the search results won't necessarily tell you who owns the LLC. For that you might have to do some more digging.

@1:39pm: I hear you, but let's face it: if someone wants to REALLY be anonymous, they will be. They'll have layers of lawyers & LLCs & corporations.

The fact that nobody can really be SURE who donated all that $$ to St. Brigid's tells us that anonymity can indeed be achieved - it just costs a lot of money!

Why look a gift horse in the mouth? We should be happy this individual did this and leave it at that. I understand the curiosity...but revealing the identity of this person may very well dissuade them from showing such generosity again. Even if the person is someone that some of you may have an issue with, the fact that they're doing this anonymously means that they are not trying to use this to wash away some kind of sin. And yes, I'm pretty sure I know who this is.