Reader report: Ticketed by the NYPD for double parking in bike lane during Alternate Side Parking 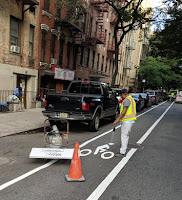 The city is apparently serious about issuing tickets to cars and drivers parking or stopping in bike lanes — at least temporarily.

Yesterday, an EVG reader who lives on Third Street between Avenue A and Avenue B told me that she received a $110 ticket for double parking in the newly created bike lane while waiting for the street sweeper during Alternate Side Parking.

She explained that the established practice on the block for at least the past seven years is that you double park, often even leaving your car unattended for a short period of time, and wait for the street sweeper to pass ... then you move your vehicle into a freshly swept space. It's the usual game of musical vehicles that takes place citywide on alt-parking days.

Yesterday, every car that was double parked on the block received a $110 ticket — for "double parking in a bike lane." (The ticket would have been far less expensive — $65 — had the drivers simply not moved their cars for Alternate Side Parking.) According to the resident, this was the first time — at least the past seven years — that the city ticketed drivers for such an offense during street cleaning.

The bike lane is new along here, however. In late June, the city added pavement markings and signage on Third Street between Avenue D and Second Avenue.

In response to increased road fatalities this year (an 18.3-percent increase over 2018) and including 15 cyclists, Mayor de Blasio in early July ordered the NYPD and DOT to crackdown on drivers and cars parked in bike lanes.

As Curbed noted, "The heightened enforcement seeks to target violations including speeding, running lights, not yielding to bikers and pedestrians, obstructing bike lanes, and double parking from July 1–21." (Of course, the NYPD is often the worst offenders of parking in bike lanes.)

In any event, cycling activists weren't impressed by the mayor's directive earlier this month. As Jon Orcutt of Bike NY told Streetsblog on July 2. "Treating it like a momentary aberration won’t protect cyclists in August or thereafter."

As for the resident, she wishes at the very least that the 9th Precinct would have given residents a heads up about the ticketing blitz, which will likely cease after July 21.
Posted by Grieve at 4:15 AM

This is NYPD being lazy. This is not what activists meant when they said the city has to crack down on double parkers in the bike lane.

The NYPD should start ticketing bikers for going through red lights and stop signs. For ever scofflaw driver, there are 100+ outlaw bikers.

Thank you NYPD 9th precinct for enforcing the law !

Absurd.
Just where are cars supposed to go ?

Folks, this is your permanent heads-up that double parking is, in fact, a ticketable violation. In case you weren't aware.

As for where the cars are supposed to go: try Kars4Kids.org. You know, the people with the infectious jingle. Donate your car today!

On 12th Street car owners sit in their cars on the side which is to be cleaned and move temporarily to the bike lane when the sanitation truck appears on the block. Car owners are either home or have someone moving their vehicles 4 days a week I don't understand why people leave their cars unattended.

Good. It's a bike lane, not a personal storage space.

to-be-fair----what if we ALL disembark the entitlement wagon and follow the law :)

The police needs to crack down on all the people. Both drivers and cyclists. Remember the cyclist last week that was run off the road by the police car, because the cyclist was running red lights.

If cyclists are ticketed for slowly going through red lights at desolate intersections then pedestrians need to be ticketed for jaywalking.

Where should cars go...
Long ago in a NYC far far away - cars were parked on the street.
As nice as it would be to donate cars to kids - people actually
do need their cars.
Not everyone works in the city, not everyone can travel by bus, train or bike.
Not everyone can afford parking in a lot.
Having a car is a not a bad thing.

As far as I know, that block is not metered, meaning drivers get to leave their vehicles on public property for long periods of time free of charge. They should pay a lot more than the cost of this ticket for the privilege. The street-cleaning-parking game is idiotic and no cyclist should have to pay with their safety for someone to keep their free spot.

Having a car/truck is NOT a bad thing but killing cyclists with a car/truck IS.
I see Cars/trucks going through red lights, blocking the box and blocking bike lanes multiple times/day with ZERO CONSEQUENCE putting cyclists and pedestrians in serious danger.
Additionally, the excessive heat that trucks/cars give off, especially in 90 degree weather, is NOT good for anyone.

It's a residential block and this is standard NYC practice, double park during street cleaning, then move back toward the end. This is not the safety hazard bike lane shit I deal with biking everyday. If it's during street cleaning let it slide unless someone is being a dummy and double parking opposite a parked car making it a tough squeeze for everyone. No matter how you look at it, the side of the road is still the side of the road and needs to be shared whether or not there are bike lane markings. I'm more afraid of turning vehicles that don't look.